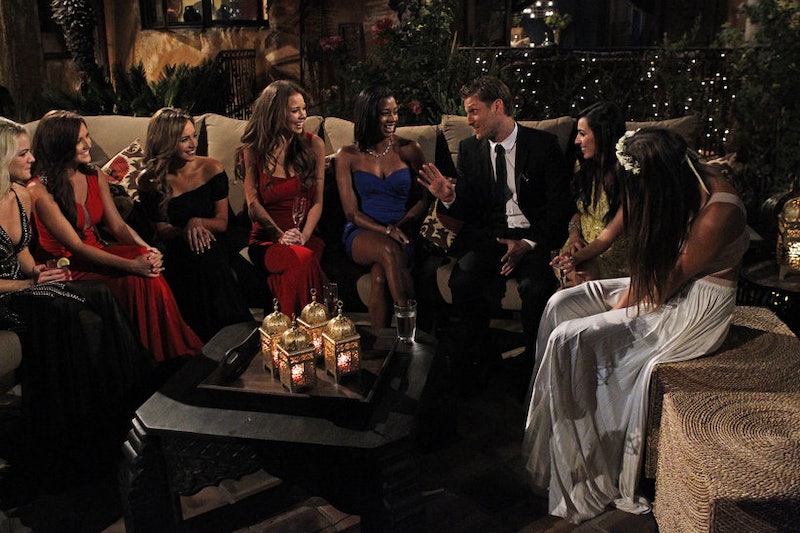 During Monday night's premiere of The Bachelor , 27 women entered the mansion wearing fancy gowns and can-win attitudes. It was inspiring, really. I was this close to tossing on one of my own prom dresses while I watched the episode, but I took a step back and told myself to chill out. "You aren't competing," I reminded myself. "You're just watching the show." Before Bachelor Juan Pablo cut nine of the 27 contestants, we sort of got to know a majority of the 27 contestants (i.e., learn each woman's age and job title). For example, I know that Andi is a prosecuter, Amy is a massage therapist, and Nikki is a pediatric nurse. Yes, those are really cool professions. BUT they cannot compete with Kelly the "Dog Lover" or Lucy the"Free Spirit." Those are their listed job titles. COOLEST PROFESSIONS. Forget The Bachelor, those two win at life.

Hey, does Carrot Top produce this show? Because there were a lot of props during that part. (And yep, you can borrow that dated joke any time.) I understand why the props happen (they're memorable), but that doesn't make them any less hilarious. Here are all of the props I saw:

The Sad Sack of the Episode—Lauren H.:

Lauren H. was engaged before the show, but the dude broke things off out of no where. Eesh. She thought she deserved the First Impressions Rose because her love life has been crappy. I'm not sure I follow that logic, but that's okay. In order to get that First Impressions Rose, she needed to actually talk to Juan Pablo... but she couldn't quite figure out how to do that. She asked the other contestants how they managed to swoop in and get that coveted one-on-one time, and then she began to spiral. Tears happened. She thought she might be breaking. UH, LAUREN H.? IT'S NIGHT ONE. When she finally landed some Juan Pablo time, was the love palpable? Nope. It was a chemistry vacuum. Poor, poor Lauren H. It wasn't entirely surprising that she went home.

The Oh, Juan! Moment of the Episode:

After Chelsie and Juan Pablo have their one-on-one time in the mansion photo booth, Chelsie holds up the pics for the camera to see. Somehow, Chelsie was cut out of every single one of the snapshots. Juan Pablo, however? Oh, don't you fret! He is in all of 'em and he is looking good. This is probably symbolic of any and all relationships he will be in over the course of the show.

There were nine of them. I try to not get attached/learn names this early in the game. Adios, ladies!