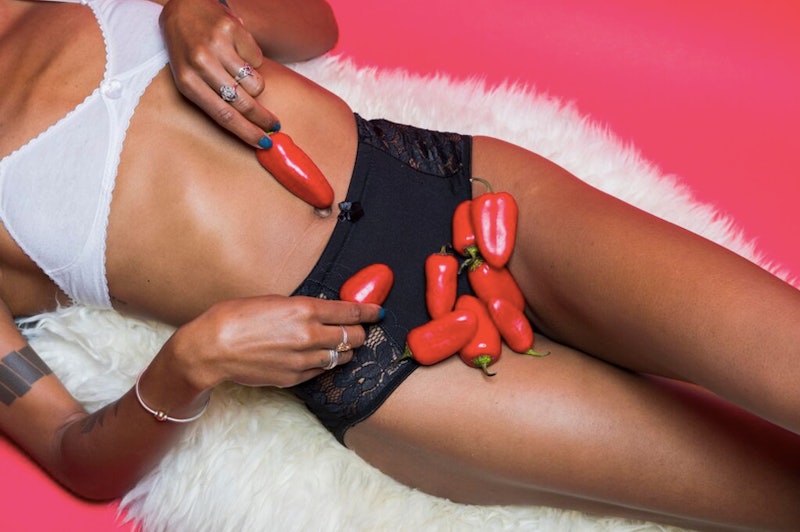 Periods are not known for being particularly fun (and for some women, they’re downright hellish). But on the surface, they seem pretty straightforward: The lining of the uterus, which thickens earlier in your menstrual cycle to nourish a potential fertilized egg, sheds, causing bleeding through the vagina. Pretty simple, right? Not so much.

As anyone who has experienced the many side effects of menstruation can attest (so that’s … pretty much all of us ladies), a period's ability to affect diverse aspects of the body is fairly astonishing. For something that’s going on in our abdomens, periods seem to have an unreasonably long reach. One of the main culprits responsible for the many physical and mental changes that occur during menstruation (and the PMS-y days leading up to it) is the hormonal fluctuation that occurs during your cycle. Most of us are familiar with common effects of menstruation and PMS, like cramps, sore breasts, headaches, and acne outbreaks. (Remind me again, why is it fun to be a woman?) But there are even stranger things that happen to your body during menstruation. Read on for five weird things your period might be doing to your body.

A 2014 U.K. study tested a group of 52 women to see how pain caused by menstrual cramps affects brain function. The researchers found that when the subjects were experiencing period pain, they performed less well on tests measuring their attention spans, ability to multitask, and how well they could select between competing targets, compared to their performance when not experiencing period pain. Dr. Ed Keogh, a lead researcher on the study, explained to The Telegraph,

We found across all these tasks a general dampening of performance. [The women who were menstruating] were slightly slower or slightly less accurate then when they’re not in pain. This shows that the effects of pain go beyond the sensory experience, affecting what we think and feel.

He went on to suggest that these results indicate that more research needs to be done on how period pain affects women’s daily lives, as well as on effective coping strategies.

The Way You Experience Pain Changes During Your Period

Research has shown that hormones may affect how one feels pain. It is for this reason that some scientists suggest that men and women feel pain differently. According to Health, estrogen levels can change how a woman feels pain, and these levels shift throughout their cycle, as well as after the onset of menopause. This relationship between estrogen and pain is not very well understood. As an expert for Health points out, some studies have shown that during periods of low estrogen, like menstruation, women are more sensitive to pain, while others have found that women are less sensitive to pain when their estrogen levels are low.

A 2011 study found that period-related pain might affect how women experience pain in the rest of their lives. Oxford researchers tested women’s pain receptiveness at different times throughout their menstrual cycles. They found that women who experienced painful periods were more likely to have increased sensitivity to pain while not on their periods than women who didn’t have painful periods. The results thus suggested that if you have routinely painful periods, then you might experience increased pain even when you’re not menstruating.

Your Cramps Can Travel

We usually think of menstrual cramps as being located in the abdomen (where the uterus is), but they cause some women to experience pain in their lower backs and upper legs as well. Dr. Elizabeth Lyster of Holtorf Medical Group explained to Woman’s Day that this has to do with the way that nerves are set up in the pelvic region. "It's like a nest where the twigs are all intertwined. So if something feels irritating on one side [like the abdomen], you may feel it on the other side [such as the lower back] just as easily."

Your Menstrual Cycle Affects Your Voice

According to a 2011 study by psychologists Nathan Pipitone and Gordon Gallup, a woman’s menstrual cycle can have a significant effect on her voice — enough that men can detect the difference. The study had a group of women record their voices at regular intervals during their menstrual cycles. The researchers then had men listen to the recordings and try to distinguish which of the recordings were created when the women were on their periods.

The men were able to guess correctly 35 percent of the time, which is a significantly better rate than they should have if they were relying on luck alone. Another phase of the research had men rank the vocal samplings according to perceived attractiveness; the women’s voices during menstruation were ranked as the least attractive of the samples. The researchers theorize that these results might demonstrate men’s subconscious ability to detect when a women is most fertile. Fertility peaks at ovulation and dips during menstruation. Men may thus have developed an evolutionary bias toward women who are most likely to be fertile.

The researchers explained to Popular Science that women’s vocal changes during menstruation are due to changes in hormones. Pipitone said, "Vocal production is closely tied to our biology ... Cells from the larynx and vagina are very similar and show similar hormone receptors." Gallup added, "The sound of a person's voice contains a surprising amount of reproductively relevant information.”

As Dr. Jennifer Wider, spokeswoman for the Society of Women's Health Research, told Woman’s Day, the pH of your vagina can increase when you’re on your period. This discourages yeast from forming, which decreases your likelihood of getting a yeast infection. However, the rise in pH, coupled with the changes in hormones that occur during menstruation, may cause increased incidence of bacterial infections in some women.