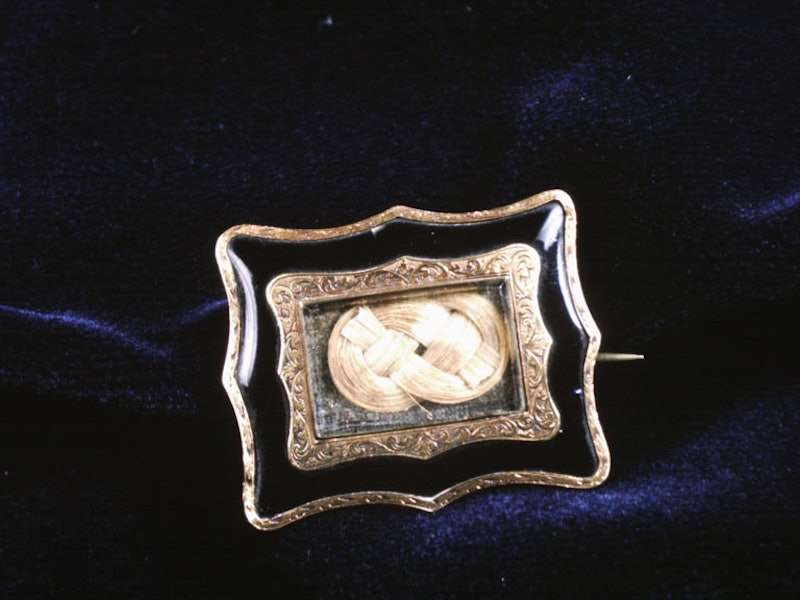 Spend enough time reading creepy historical facts and looking at old pictures, and it's easy to start believing that all of the past was just one extremely high-budget haunted house ride. Why didn't anyone ever seem to take a photo that wasn't soul-piercingly spooky before, like, 1965? Why is everything in old photos made of black velvet and rusted iron? Why did all our ancestors seem to live in houses out of one of the Saw movies? When viewed through our modern sensibilities, the past is often, to use the terminology preferred by professional historians, "freaky deaky."

And yet, the past doesn't feel creepy to us because American life was art-directed by a deranged Goth teen until some time in the mid 1970s; rather, it's because our actual sense of creepiness is impacted by things like the passage of time. As this video by VSauce exploring the concept of creepiness notes, feeling creeped out is different than feeling scared after seeing something dangerous. Instead, "creepy things are kind of a threat, maybe. But they're also kind of not. So our brains don't know what to do. Some parts respond with fear, while other parts don't...So instead of achieving a typical fear response...we simply feel uneasy." This is probably why our brains often view the mix of the familiar and the strange in old-fashioned photos — say, familiar-looking people surrounded by outdated furniture that our brains process as "unusual" — and come back with "Ugh, creepy."

All this is to say, the six creepy items below were totally normal in their era, and used by normal people — but changing beliefs and social standards have rendered things like taking photos of dead people or looking at sexy medical dummies spooky-seeming. But really, what's spookier than the inevitability of the passage of time, eh? EH? (Sorry, I'll stop).

When a loved one passes away, it's natural to want to keep a memento to remind yourself of them. It's the urge behind popular modern forms of honoring the dead, like tribute tattoos or Facebook memorials. But in the Victorian era, people didn't have tattoos or social media (I know — chilling), so they had to preserve their memories of the dead in a more low-key way, often by wearing a special piece of jewelry dedicated to the memory of their loved one.

Sweet, right? Except Victorian mourning jewelry is a bit different than wearing your grandma's brooch in her memory. It was more like wearing a bit of Grandma herself in her memory. Mourning jewelry, you see, isn't just made to mourn a specific person — it's made with a piece of that person incorporated into it.

Yup! Locks of hair, teeth, and bits of bone all found their way into mourning jewelry, which existed since the 1600s, but only became popular in the nineteenth century, the era when most mourning jewelry we have today was made.

Now, in fairness to the Victorians, they mostly lived in an era before the popularization of photography — so unless you were from a wealthy family who had had your portrait painted, the mementos you kept from your loved one were all you had to remember them by. And since Victorians lived in an era when people thought the idea of doctors washing their hands before surgery was cuckoo-bananas, death was a thing that Victorian people had to constantly cope with. So there's actually a very touching and relatable sentiment behind mourning jewelry. But yes, it's still a bracelet made from a dead person's hair.

Of course, I'd be the pot calling the kettle morbid if I didn't admit to owning my own Victorian mourning locket with a lock of hair inside. If, like me, you find the idea of running around with a dead Victorian's hair around your neck perversely appealing, you can often pick up antique Victorian mourning jewelry on sites like Etsy and eBay.

As any of you who have seen Alien already know, despite all the technical advances and violence we've been exposed to in the nearly four decades since its release, that movie is still scary as hell. Which makes the decision to release tie-in children's toys for this R-rated movie a bit of a head scratcher. Why did they do it? Because back in the old days, the only ways kids could entertain themselves was by playing with plastic dolls depicting monsters from beyond the stars who feasted upon human flesh, OK? I mean, most people didn't even have cable yet!

As pictured above, Halloween costume company Ben Cooper issued a children's costume of the monster from Alien. I am sure you'll agree I'm not overstating things when I say this costume looks like The Babadook, and is definitely here to eat your soul and organ meats, leaving no trace of you except your skin, gently flopping in the breeze.

John Squires at the Blumhouse blog wrote a great history of the release of the Alien toys in 1979, which culminated in the toys being pulled from shelves after parental protest — proving that even people in the past had their limits when it came to creepiness.

It was a long medical road to today's friendly science lab skeletons; because not terribly long ago, doctors learned how to heal the sick by looking at eerie wax dolls with removable organs. First crafted in 14th century Italy, wax anatomy models were a key medical teaching tool, spreading through Europe throughout the 18th century, a time when healthy bodies were rarely available for educational dissection by medical students.

However, while some of these models were bare bones (ahem) creations, intended simply to train young doctors on how to tend to their patients, others were created with a great amount of artistry — sometimes a thoroughly unnerving amount. Like the "anatomical Venuses."

An anatomical Venus was a wax anatomy model of a reclining woman with long, lush hair. She was often striking a pretty sexy pose. Also, you could remove almost all of her organs. Does she look like she's writhing in agony? Or having an orgasm? Both, kinda? This very, uh, complex array of things expressed by the anatomical Venus is part of the reason they have remained of interest to collectors, art enthusiasts, and pervazoids alike for centuries after they were supplanted at medical schools by more practical medical teaching tools.

"Hey Gabrielle," you may be saying, "you're being kind of hard on those Victorians. Don't you understand that they had to find their own ways to mourn, especially since they didn't have access to any of our modern grief counseling techniques? Also, isn't wringing a punchline out of 'the Victorians were creepy' the same as yelling 'My wife!' in the Borat voice?" Decent point. (Although I wonder, has enough time passed that the Borat voice is now cool in a retro way? Discuss!) It's true that Victorians were doing the best that they could to deal with the non-stop death all around them. But again, that doesn't mean we have to find their methods un-weird.

One great example: photos of dead people. Getting your photo taken was a once or twice-in-a-lifetime event for most Victorians; and if your life passed without ever getting a photo, well, your family might decide that that shouldn't stop them from getting an image to remember you by. Enter: postmortem photography.

Taking photos of a deceased loved one was so common during the Victorian era, experts estimate that postmortem photos were actually the most common kind of photography of the time. It wasn't considered weird or spooky; you'd display a postmortem photo, usually called a "memento mori," in your parlor, or show it to a close friend. The practice became less popular as both photography became more common and medicine helped more Victorians stay alive. But think about it: will future generations consider this any less weird than those 40 selfies you posted every time you drank an iced coffee? (These future generations will be from a dark post apocalyptic future where the grid has gone down and also there is only hot coffee).

Most of the things we've discussed today have been called creepy by me, an enthusiastic but imperfect amateur cataloger of the uneasy. However, this toy — a talking baby doll created by Thomas Edison himself — was called creepy by no less an authority than a staff member at the Smithsonian National Museum of American History. Curator Peter Liebhold spoke to Technical.ly about one of the museum's newest displays, featuring Edison's phonograph doll, which was released commercially in 1890. "We call it the creepy baby doll," Liebhold said.

Funnily enough, Edison's doll was a commercial disaster, but not because her voice sounds like a recording of a haunted meat processing plant. No, the doll was unpopular with consumers because they were expensive, and because the cylinder that held the awful recording wore out too quickly. Oh no! The mechanism that supplies this doll's Satanic rantings ran out too quickly! As soon as little Sally stops speaking backwards in Latin and having her head spin around, she'll be devastated!

6. Speaking To The Dead

Yeah, there are plenty of people today who consider talking to the dead totally normal. But in the late 19th century, talking to the dead wasn't just the province of storefront psychics and eerie children in horror movies; a popular faith called Spiritualism swept the United States, leading thousands of people to regularly attend seances, where mediums claimed to communicate with the dead, often by making knocking sounds (called "spirit rapping"), levitating objects, writing on chalkboards, playing musical instruments and engaging in other forms of communication. For any of you who've spent time at Disneyland lately, it was basically exactly like the Madame Leota part of the Haunted Mansion.

The public mania for seances is often attributed to the great loss of life in the Victorian era, from disease and war; mourning families often sought out mediums looking for the solace of connecting with their deceased family members, which makes the entire thing more depressing that creepy.

But many mediums claimed to be making contact with people way more over-the-top than, say, children who had expired from measles; some of the more flamboyant mediums claimed to talk to historical figures like Peter the Great. A lot of these mediums achieved fame and fortune, despite being scorned as frauds by a community of logical debunkers (much like the stars of today's cable TV ghost hunting show) — and despite the fact that many practitioners, including the young Fox sisters who popularized mediumship in American culture, confessed trickery or were revealed to be faking their results.

Seances eventually fell out of fashion, like all of these things, replaced by the next trend (flappers? color TV? Those sunglasses that make you look like Geordi La Forge from Star Trek: The Next Generation?). What trends will we be dismissing as creepy in the future? Meet back here in 50 years to find out, when our grandchildren will be discussing how creepy we were for reading articles about jewelry made from dead people's hair.

More like this
What The History Of Pride Month Means For Celebrations Today
By Jay Polish
8 Creepy Things You Probably Did In The '90s
By Julie Sprankles
Remember These Ancient Pieces Of '90s Tech?
By Lucia Peters and Emma Carey
11 Trends From The ‘90s That Made You Feel So Cool
By Julie Sprankles
Get Even More From Bustle — Sign Up For The Newsletter