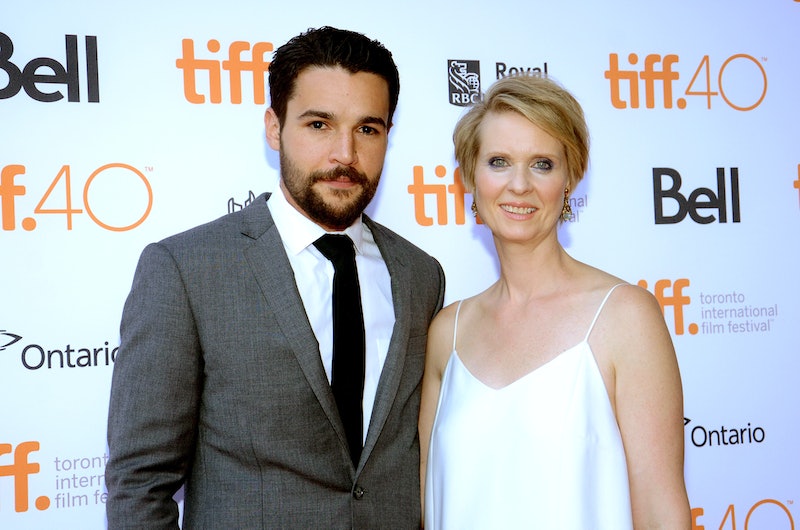 "Terminal illness is something that happens in the midst of life," James White star Cythnia Nixon says. "It's not like your life starts, stops, and makes room on the stage for this thing to take over. It takes over but your life continues. You still have to figure out a way to pay your bills." And the 49-year-old actress should know. In 2006, she was diagnosed with breast cancer during a routine check up. But the actress decided to keep her diagnosis a secret, not wanting to add the stress of tabloid headlines to her battle with the disease. "I didn't want paparazzi at the hospital," Nixon told Nightline 's Cynthia McFadden in 2008. Nixon beat the cancer in 2008, but her year-and-a-half long battle makes her role as Gail in James White all the more significant.

Co-starring fellow HBO star Christopher Abbott (Girls), James White surrounds a late twentysomething trying to find himself while coping with the death of his father and helping his terminally ill mother (Nixon) get by. The story is written and directed by Josh Mond and is a narrative inspired by his relationship with his own mother. Nixon herself felt particularly compelled to the role not only because she had gone through a similar experience to Gail's, but because Gail reminds her of her own mother, a woman who also battled cancer when Nixon was a 12 year old.

"This character has a lot in common with my mother. She's an independent thinker, a bohemian, a person who tried to make a career in the arts and didn't really get where she was hoping to get. But she raised her child with the values that she had and didn't try and control them too much," Nixon says. "Gail is a very powerful person, albeit in a very weakened state."

Seeing Nixon's character in said weakened, almost gruesomely sick state takes up most of her screen time. It's difficult to process at times, but so is encountering a real woman with cancer. "Authenticity was very important. Cancer happens to complicated, real people that have strengths and weaknesses. It happens to people who have lots of faults and problems already, and then this thing gets thrown on top of it," she says.

When I ask Nixon about the mood on set — how she managed to escape from the dark places her character inhabits after Mond yelled, "Cut!" — Nixon assures me the vibe on set was never too bleak. According to Nixon, it mirrored real life. She expresses that those with cancer (or playing those with cancer), aren't looking to be any sadder than their current state forces them to be. They're probably just looking for a laugh.

"When painful things are happening, the mood is not somber. The mood is deeply grieved, and then not. The people who are solemn are the people who are in the presence of people who something terrible has happening to, and they are trying to match the mood," she says. "But people who have something terrible happen to them are desperate for a laugh. It's like the only way to deal with the horror. You don't want to create more horror or solemnity in the face of horror. You want to create jokes, and your cynical about how horrible things are. And out of cynicism usually creates humor."

Nixon appreciated the role for "all the colors" she was able to play. For the actress, her worst fear is being "the person who always sounds monotone. I wanted to show that Gail was tough, and wasn't gonna let up on her son."

Her son, played by Abbott with many varying colors of his own, made sure to treat Nixon with the respect and admiration he would apply to his own mother. According to Nixon, all of the men on set — for which there were many — treated her as very "other," in the kindest sense of the word. "It was strange because being on [a male dominated set] is something that almost never happens to me. I'm in a lot of female dominated or even entirely female dominated things," she says. "But it was great. I love the guys. I love the way they are with each other. They have such a brotherhood. They are very touchy, they are very affectionate. They are very respectful, of particularly a woman of my age. We knew we had each other's back."

James White, though it dives into the deep, dark caverns of cancer and forces audiences to confront their own mortality, also showcases the kind of kinship Nixon feels with her co-workers. It's almost a love story: A mother and son torn apart by cancer, but ultimately bonded by love. It hits theaters Nov. 13.