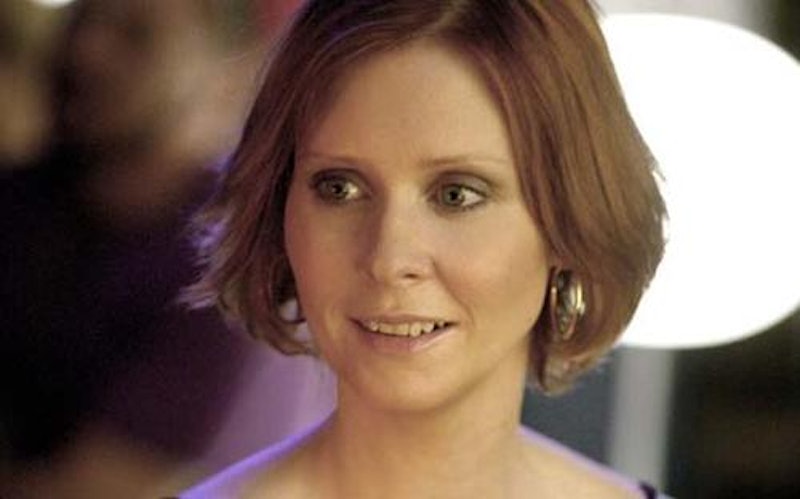 I won't deny it: One of my favorite past times is without a doubt talking about Sex and the City. Moreover, as both a fan of SATC and a redhead (born that way, baby), I'm even more excited to discuss the fierce, flame-haired lawyer who taught all us fans important life lessons, Miranda Hobbes (played by the brilliant Cynthia Nixon). No one can deny that all four women contributed to the show's fabric in their own unique way, each coming armed every season with varying experiences and life lessons that ended up mirroring the experiences of other single women entrenched in the dating world.

Between Carrie's tumultuous on-again/off-again relationship with Mr. Big, Charlotte's relentless pursuit to find someone who could put a ring on it, and Samantha engaging in sexual trysts as often as Carrie went shoe shopping (no hate, of course — play on player), Miranda fixed herself as the voice of reason throughout the show. Some people may have viewed Miranda as cold or guarded, but I personally found her to be the most levelheaded of the bunch. She also delivered the most valuable advice throughout all six seasons.

Oh, and she had a delightfully plump tabby cat named "Fatty." What more could you ask for? Let's take a look at the life lessons we learned from Miranda Hobbes.

It's Good to Be Cautious

When Miranda first meets bartender Steve in Season 2, she is decidedly apprehensive about his seemingly smitten nature after what had all the familiar symptoms of a one night stand. Steve pursues Miranda, and after a few rebuffs on her part, Miranda decides that "maybe she can believe" that there was something between them other than sex, which leads to a magical kiss in the rain and the beginning of the gloriousness that is the Steve/Miranda coupling.

That being said, I found Miranda's reticence to be a positive thing. For every one night stand that leads to a monogamous relationship (they seem to happen as frequently as shooting stars), there are a string of hookups that can lead to mixed messages and hurt feelings. Miranda recognized this from the get-go, and saved herself some distress.

Miranda knows how to spot a slime-ball, and did so multiple times. Whether it was a guy who refused to date anyone other than models, or a guy who wasn't divorced but was "seriously separated," Miranda taught us not to put up with any flack. We're fabulous, after all, and fabulousness deserves only the best.

Some Things Can't Be Sugarcoated

OK, I am going to go on the record and say I was always a shipper of Carrie and Mr. Big. Still, Carrie's relationship woes with Big (especially that time with the extramarital affair — #yikes) were borderline masochistic at points. Did I say borderline? I meant that they were totally masochistic at points. Of all the girls, Miranda was the one to give Carrie the unfiltered truth, which she definitely needed to hear.

Nothing heals a broken heart like cosmos with gal pals and a new pair of pumps. These things also have a tendency to drain your bank account. Rather than repeatedly squander her pennies (of which she had many, being a partner at a law firm and all), Miranda was frequently seen sweating out her stresses at the gym, company softball games, running tracks, and more. Work it, girl!

Although Miranda did her fair share of dating, it never seemed as high a priority to her as it did for Carrie and Charlotte. While Carrie was trying to make sense of her dizzying relationships with Big and Charlotte was penciling "husband hunting" into her daily routine, Miranda was advancing her career. Of course, this isn't to shame Carrie and Charlotte's choices — quite the contrary — but it's still inspirational that Miranda was clearly dedicated to her career. Like I said, girl, work it!

Miranda's cautiousness when it comes to love has been noted on this list as a good thing, but she could sometimes take this apprehension too far. Case-in-point: Miranda tormented herself during Season 6 by not telling Steve she was still in love with him. During their son's first birthday, however, Miranda finally took the plunge with a tearful admission. The result was a Steve/Miranda reunion we had all so desperately been waiting for!

It's OK to Indulge

Apple martinis aren't the only thing Miranda displayed a penchant for throughout the years. In one episode, we watched Miranda develop a fixation with chocolate cake that was strong enough to send her reaching in a trash can for one last sliver. In another episode, where the girls were describing their "secret single behavior," Miranda gushed over moisturizing her hands with Vaseline and binge watching infomercials. Oh, and who can forget that time her boyfriend said "I love you" on a ginormous cookie, and Miranda proceeded to eat the entire thing? Excuse me, Miranda, while I nurse a pint of double fudge ice cream and peruse various images of Ryan Gosling in your honor.

Friendship is the Best Ship

Throughout everything, Miranda always put her friends in the same ranks as family. Whatever dating disasters, breakups, or mixed signals (it took many of us a few years before learning the epic phrase "he's just not that into you") occurred, Miranda always knew the value friendship had in making it through.

Thanks for the life lessons, Miranda! I'm dedicating my next cosmopolitan to you.