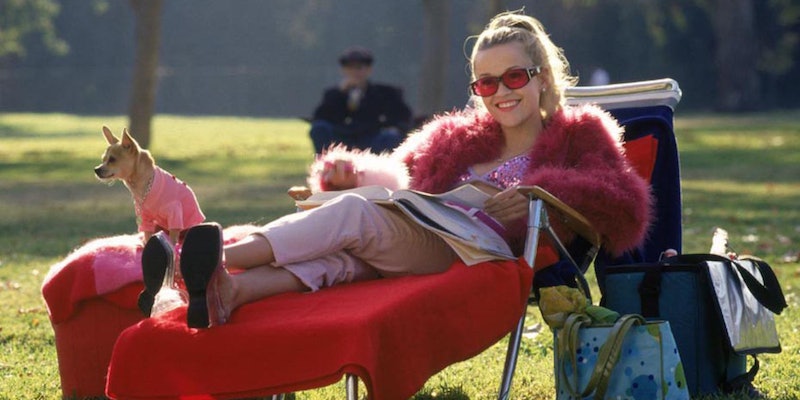 During his Monday night appearance on The Late Late Show, Luke Wilson joked half-heartedly about wanting to make a third Legally Blonde movie. Though the joke may have been half-hearted though, as a fan, the idea of making a third Legally Blonde film is an exciting one to me. Also, it doesn't even look too far out of the realm of possibility: In fact, Reese Witherspoon talked openly about the idea on Fashionably Late with Rachel Zoe: "I think it’d be kind of a cool thing to have her be a Supreme Court Justice or somebody who runs for office, president."

Elle Woods 2016? To be honest, the timing is kind of right for it — and I'm sure she'd absolutely obliterate Donald Trump during a debate.

But, considering the original film was released in theaters back in 2001 (and the sequel was released in 2003), a lot has changed in 14 years — so, if it were to happen, how would Legally Blonde 3 be different than the first two films? Just take a look at how much the world has changed since the first film aired, and how Legally Blonde 3 would have to be different if it were to happen.

If the movie were made today, Elle would be 36 years old. I imagine she’d either be trying to juggle her career with kids, or trying to figure out if she wanted to get pregnant. Either way, it could add a really compelling element to the movie and to her character.

Professor Callahan Would Be Prosecuted

Or, at least, I hope he would be. That kind of sexual harassment in school or in the workplace is so not tolerated.

I hated all of that silly beef between Elle and Vivian in the first movie. In today’s more feminist films, there are more examples of women working together than not. Something tells me Elle would be all about that.

Sorry, but murder cases and animal rights activists would probably take a back seat to bigger feminist issues, like reproductive rights and equal pay.

With all of these changes in mind, I think it would be awesome to see Elle Woods navigating the world as a powerful woman in 2015. Can we start a petition or something to seriously make this movie happen?

More like this
Sandra Bullock, Girlboss Extraordinaire
By Matt Harkins & Viviana Olen
Harry Styles Called For "Backlash" In Powerful Statement On Abortion Rights
By El Hunt
Twitter Was Saying The Same Thing About Sam Ryder’s Surprising Eurovision Result
By El Hunt
Laura Dern Said “Cultural Awareness” Made Her Rethink This 'Jurassic Park' Fact
By Grace Wehniainen
Get Even More From Bustle — Sign Up For The Newsletter