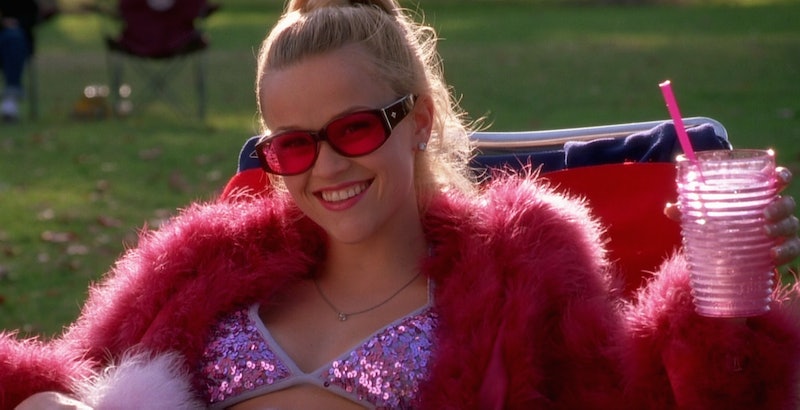 Hey, Legally Blonde fanatics, we have some news that’ll make you totally bend and snap. In an appearance on Fashionably Late, Reese Witherspoon discussed the possibility of a Legally Blonde 3 . "It’s kind of great right now because we’re talking about women in politics and how important that is to get more women." And I think it’d be kind of a cool thing to have her be a Supreme Court justice or somebody who runs for office." Hell yes, to President Woods! However, if we’re going to do another Legally Blonde sequel, we should approach with caution.

Now, everyone who knows me knows that I adore the original Legally Blonde with a fiery passion. It has proven to be, several times over, a feminist masterpiece in the guise of a fun, funny, and fashion forward film. And then you have Legally Blonde 2 , an enjoyable though polarizing rehashing of the first film that puts Bruiser in the spotlight with his own subplot along the way. Both films have a little something for everyone, but which one is your favorite can often start arguments over family dinner.

So if we're going to pursue a follow-up to the follow-up, we need to do it right this time. And here is a short list of everything that Legally Blonde 3 would need to stay gold.

I guess a seat at the Senate would be slightly more believable (slightly), but it's a movie, so let's go big or go home. Elle was eying the White House at the end of the last film, we know where her ambitions are at... and where they can take her.

2. The Return Of Vivian Kensington

Remember how at the end of the Legally Blonde Elle and Vivian had become best friends? And then in the next flick she's somehow mysteriously disappeared? I think it's prime time that Vivian makes a resurgence. Hmmmm, Vice President Kensington, I like the sound of that.

With all due respect to Elle's Delta Nu sisters, they're really more like comedic side characters. Of course the two deserve their own cameo (everyone knows they would get involved in a campaign for our girl), but more screen time should go to Vivian.

4. Elle Dealing With The Emotionally-Battering World Of Social Media

Not because I want her to suffer; just because I think it's a modern way of coping with some of her old prejudices. In the past, Elle had to prove her worth to a group of peers that doubted her abilities. In 2015... it's a lot harder to win over millions of hungry trolls.

Which you, and I, will think is brilliant, but the mainstream media will tear apart as Elle not being a "serious enough" candidate.

6. "Bend And Snap" As A Campaign Slogan

I mean, what else will do?

7. Bruiser Dressed Up In Many On-Theme Costumes

For the uninformed, Elle is actually dressed as Gloria Steinem undercover as a Playboy Bunny in the "costume" party scene. I have faith the women's rights activist would be a big Woods 2016 supporter.

Without question, Paulette is the best part of Legally Blonde, and perhaps modern cinema as a whole.

10. A Rousing Speech That Encapsulates Elle's Obscured Intelligence And Her Style Prowess

There is nothing as exhilarating as watching Elle grill Chutney Windham and reveal her as a murderer based on her supreme knowledge of getting a perm of all things. However, I think Elle would best win an election by delivering something that separates looks (beautiful, shiny, pink looks) from politics, proving she has just as much substance as some stuffy old man in a dowdy suit... if not more.

11. And Of Course, Absolutely Flawless Hair

Anything less than that would be completely unacceptable.

Come on, Hollywood. As Elle herself says, "What, like it's hard?"