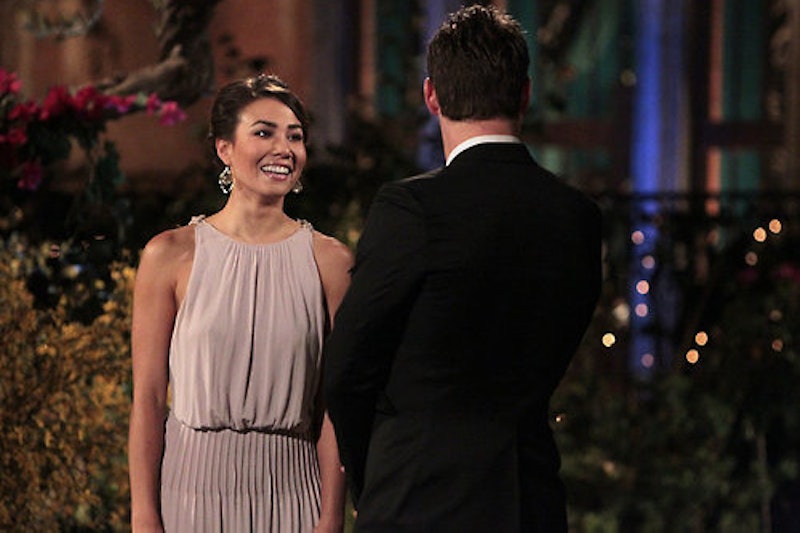 Everyone is calling The Bachelor 's first impression rose moment with contestant Sharleen Joynt super awkward, but I'm calling it super normal. I don't know how The Bachelor producers slipped up and let a regular girl on the show, but it's refreshing. It's like watching myself if I was ever on the show. With a house full of 26 other girls declaring their love for Juan Pablo Galavis and how meant to be they are — Sharleen, who flew all the way from Germany for the show, had some totally understandable misgivings about her probably two-minute conversation with the bachelor.

“Juan Pablo is definitely a good package,” she said. “But you know, I guess I thought I would feel a little more of this insta-chemistry than I did. I guess I feel a little distraught because there has been so much buildup and you kind of expect some kind of connection that honestly — if I’m totally honest — seemed a little forced.”

Finally someone's got it — that first meeting (and most of the show) is a little forced. Yes, marriages can come out of it, but mostly that's just luck because the framework of this show is to put a ton of girls (or guys) into one house, deprive them of outside entertainment, and make them fight over the same significant other. That's not a recipe for true connection. You can already see the superficiality on day one when girls who get sent home are tragically upset and other girls who get to stay are so thrilled because they just know Juan Pablo is their future husband. How do they know all this? From a few minutes of conversation? Sometimes it feels more like they're in love with the idea of winning, than with finding love. (Remember Courtney from Ben's season?)

So Sharleen's totally right in being unsure because while she just didn't feel the connection, Juan Pablo felt she warranted the illustrious first impression rose. That definitely shows they're not on the same page. I almost wish Sharleen had just told him what she was feeling, but instead she hesitated for several seconds and then accepted his rose with an amazingly brilliant "sure?". It was hilarious and of course probably just made Juan Pablo want her more because thrill of the chase and all that boy stuff.

The season preview makes it look like she goes pretty far, so I guess we'll have to see if the connection ends up growing for her. I just selfishly want Juan Pablo to keep her because she adds some normality to the whirlwind of tears and fake tans that all the other girls have going on.