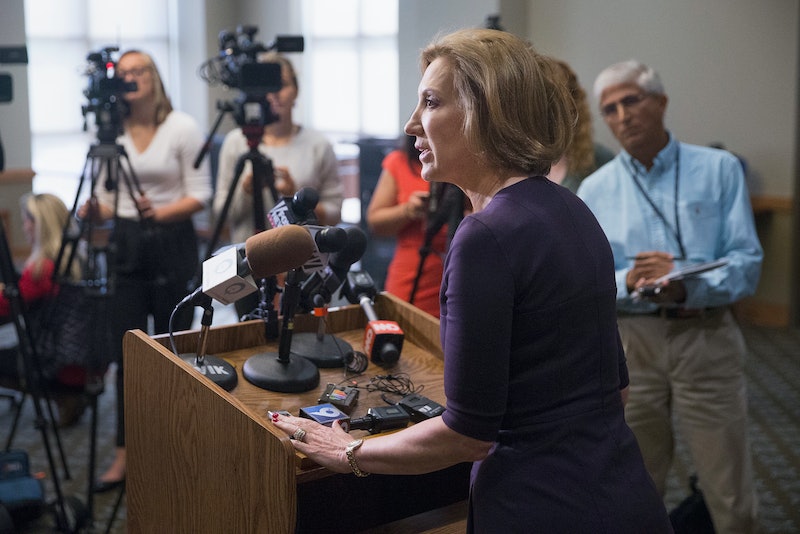 Carly Fiorina is at the grown-up table again for the upcoming Republican debate on Wednesday night, and there is sure to be renewed interest about her family, including Carly Fiorina's stepdaughter, Traci Fiorina Tribby. At the last debate in September, Fiorina shared with the world the heartbreaking story of the loss of her younger stepdaughter, Lori Ann Fiorina, who died of chronic drug and alcohol abuse in 2009. Fiorina's mention of Lori Ann's tragic drug overdose, and Fiorina's continued success in national polls, brought a new spotlight to Fiorina's family life.

Born in 1971 to Frank Fiorina and Patricia Easler, Traci was an only child for four years before little sister Lori Ann was born. Her parents separated when she was 10, and her father would marry Carly Bartlem four years later in 1985 — Tracy was one of only six attendants at their small, backyard wedding. According to Fiorina's memoir Tough Choices, Carly and Frank wanted children of their own, but it "wasn't God's plan" for Lori and Tracy to have more siblings. According to her personal Facebook page, Tribby was a member of the White Star Majorettes Corps, a baton twirling team that performed in local parades. She graduated from Osbourn Park High School in Manassas, Virginia, in 1989. Just like her father and stepmother, Tribby took a job at AT&T and worked full-time while earning a bachelor's degree from Strayer University and a mini-MBA from Pennsylvania State University.

Tribby now lives with her husband and two daughters, Kara, 12, and Morgan, 16, in Chantilly, Virginia, about a 45-minute drive from the big white house Carly Fiorina wants to live in come January 2017. She left AT&T after 15 years to focus on raising her daughters and is a full-time stay-at-home mother, but she seems to have kept busy. She was the honorary co-chair for the Moms For Carly coalition during Fiorina's 2010 Senate run, and was described as "proud, goal-orientated" and "an active volunteer in her community," working with her daughters' schools and Girl Scout troops.

Tribby's apparent reluctance to enter the public eye is understandable — with all the media attention surrounding Fiorina's campaign and the upcoming debate, being thrust into the spotlight would be immediate and jarring. But Fiorina is gaining in the polls in Virginia, and if her campaign is still surviving by the time primary season kicks into high gear, Tribby and family might be called upon to make a public appearance or two.