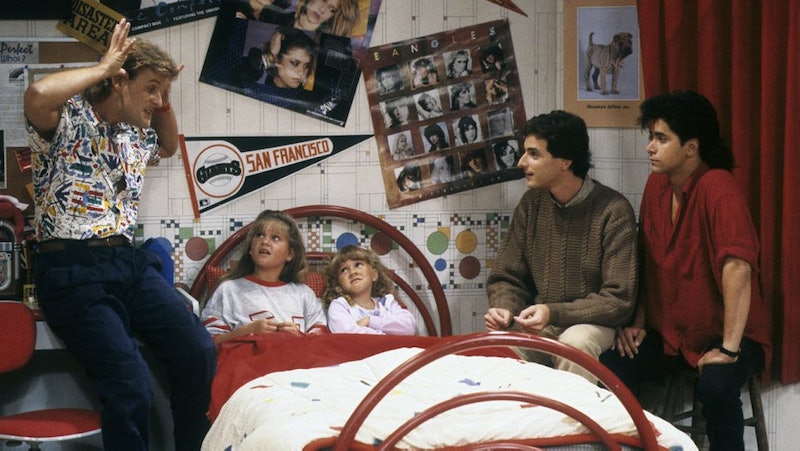 As much as I may worship the ground every ‘90s sitcom walks on, one thing has always abundantly clear: The families in ‘90s sitcoms were a whole lot different compared to the real families I knew and loved in the '90s. Granted, I’m sure this feeling has been consistent amongst generations comparing their favorite sitcom families to their own: Though what we grew up watching in the ‘90s was nothing like what our parents grew up watching, those shows in the '60s and '70s that depicted practically perfect families must have been unbearable at the time. But still — '90s shows were definitely way more quirky than something like, say, Leave It To Beaver, and because of that, there were a lot of things that were totally off-base when it came to real family life.

Thankfully, television shows have come a long way since the ‘90s as far as representation and realism are concerned, but there are so many things that I notice when I re-watch these old shows now. They seem so far from the reality of my life and the life of so many people I knew. First of all, nobody’s house looked like the Banks’!

But, that’s beside the point.

Reality: The one time you can remember your dad cleaning, you’re pretty sure he was using Windex to get salsa out of the carpet.

Expectation: The Tanners from Full House.

Reality: Meanwhile, you asked you family to renovate the attic so you could finally have your own bedroom and they “talked about it” for three years before it was too late and you were already in college.

3. Being Cool With Friends Visiting Through The Window

Expectation: Sam from Clarissa Explains It All.

Reality: Yeahhhhh, you learned early on that sneaking friends in and out of your bedroom window would earn you a direct ticket to grounding.

4. Moms Who Are Retired Models

Reality: Your mom was a former band nerd.

5. Wives Being Cool With Their Husbands Spending All Day In The Garage

Reality: Nope. Your mom would make you go get your father after letting him tinker with the car or something for a few minutes.

Expectation: Zelda and Hilda from Sabrina, The Teenage Witch.

Reality: Yours squeezed you a little too tight and judged your parents for not teaching you to keep your elbows off the table.

7. Problems Being Solved In Under 30 Minutes

Expectation: Every sitcom, ever.

Reality: Real life is a little less timed than that.

Honestly, I’m thankful for these differences. Those ‘90s families were just a little too scripted for my taste. I prefer my family dynamics a little more on the quirky side, thank you very much.