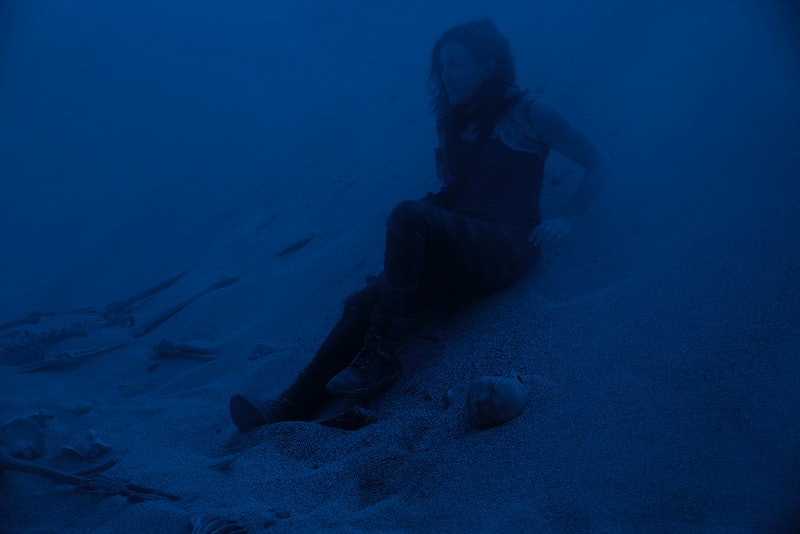 The revelation that Jemma grew close to someone who wasn't Fitz during her time on the alien portal planet is potentially sad, but not the craziest thing to happen on the Marvel series this Tuesday. Who or what is Death on Agents of S.H.I.E.L.D. ? A mysterious hooded figure haunted the planet's residents and caused sandstorms, with Simmons' co-inhabiter Will referring to it as "Death." This may explain not only why people were being ritualistically sent through the portal, but where this plotline fits within the Marvel Cinematic Universe.

Before her encounter with Death, Jemma met Will Daniels, an astronaut who came with his crew through the portal in 2001, which means that NASA was aware of the monolith. Will has been living on the planet for 14 years and watched his friends go insane and then vanish after visiting the "No Fly Zone" where this individual resides. He hasn't seen what he calls "Death" that many times, but seems to have an understanding of how it affects people. However, Will also talked a big game about how much he missed the sunlight, and then didn't seem too perplexed at the end of the episode when he was basking in some kind of solar energy.

Back to Death, who is this hooded figure, and why does he or she send aliens to confuse you? There is a character called Death in Marvel comics, and she (oh yeah, Death's a lady) wears a cloak and lives in the Realm of Death. Could that realm be what this planet really is? She also has the ability to take the form of a loved one — so it's a good thing that Fitz was really there! Thanos is in love with Death, because of course that evil guy is. Death is also associated in the comics with Deadpool, the male version of Captain Marvel also known as Mar-Vel, and an Angel of Death named Azrael.

The name "Death" also matches up with the Hebrew writing that Fitz found on a scroll earlier in the season, and carved into the temple where those crazy Europeans were sacrificing each other to the monolith. Clearly, someone on Earth has an understanding of who this character is and what they want. This is great news, oddly, because if Jemma and Fitz want to get Will back in one piece, they're going to have to fight Death.