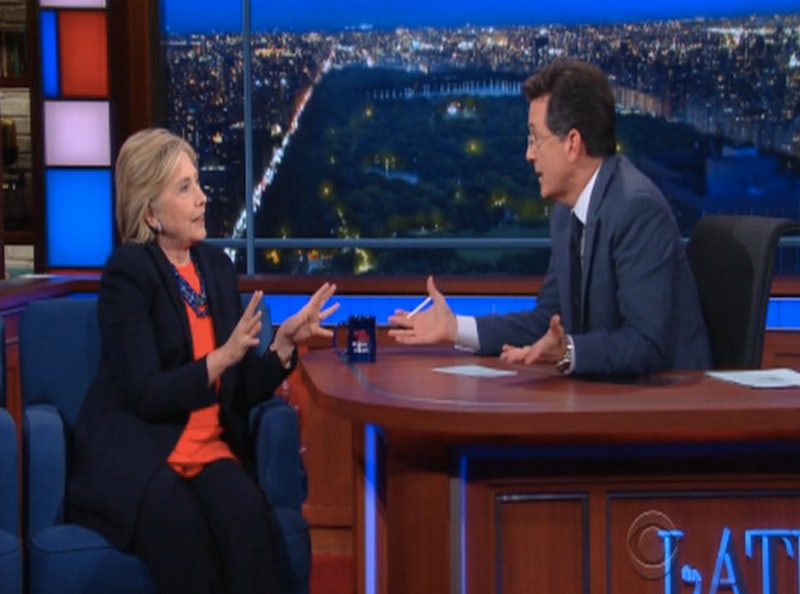 Hillary Clinton made her first Late Show appearance since Stephen Colbert took over hosting duties in September, giving an interview to the comedian on Tuesday night's program. The Democratic presidential hopeful made her appearance a relatively lighthearted one, revealing that she and husband Bill were avid fans of bad television and had finally finished the political drama House of Cards on her birthday on Monday. But Clinton got serious when it came to the subject of the economy. The third GOP debate, to be held Wednesday night, is primarily focused on the country's finances, so it only makes sense that Clinton would touch upon the subject. What's really surprising is how Hillary Clinton attacked big banks and Wall Street, however.

Clinton has previously stated that she does not support reinstating the Glass-Steagall Act, a bill first implemented in 1933 that created a divide between investment and commercial banking while also establishing the FDIC. The former secretary of state has stated that she'd rather implement a more comprehensive reform, which she outlined in a lengthy July 2015 speech at The New School in New York City. Though less verbose during her interview with Colbert, Clinton indicated that she is firmly committed in shaking up Wall Street and allowing institutions that were "too big to fail" to finally fall without government intervention.

Clinton repeatedly answered "yes" when Colbert asked if she would allow big banks to fail, and continued:

Under Dodd-Frank, that is what will happen because we now have stress tests. I'm going to impose a risk fee on the big banks if they engage in risky behavior. But they have to know — their shareholders have to know — that yes, they will fail, and if they're too big to fail, then under my plan ... they might have to be broken up, because if you can't manage it, then it's more likely to fail.

Regardless of her strong ideals, Clinton has been repeatedly criticized for her ties to Wall Street — especially when it comes to campaign donations — as well as the high price she commands for speaking engagements. Critics view Clinton's comments as out of touch given her own economic status. She stands as one of the richest candidates vying for the presidency: Forbes pegs her and Bill's total declared assets at $45 million. Clinton's Tuesday night appearance marks the first time she's been interviewed by Colbert as a stand-alone host, rather than a comedian playing a character. The appearance could mark a shift for both in terms of transparency. It certainly helped humanize the Democratic presidential hopeful while also shifting the focus of her campaign to the economy.