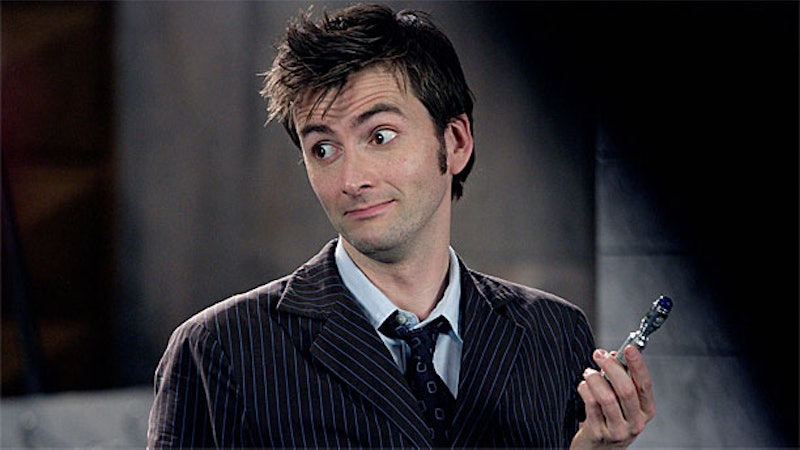 I think I speak for many of us when I say that I really miss David Tennant on Doctor Who. Sure, I eventually got used to Matt Smith as Eleven and even eventually became fond of him, and I've tried ("tried" being the key word) to warm to Peter Capaldi as Twelve, but nothing will ever erase the years we spent with Ten from my memory. He was sassy, fun, adventurous, and pretty adorable — not to mention he got to travel with some of the best female companions (love you, Rose Tyler and Donna Noble). I've been wishing Tennant could come back ever since the Season 4 finale, and now it seems like I finally got my wish — well, kind of. Tennant is returning to the Doctor Who universe, but not exactly how you might think. Instead, he'll be lending his voice to three new installments of the Doctor Who Audio Dramas.

If that news isn't enough to make your entire week (and let's be honest, it probably is), there's even better news: Catherine Tate will reprise her role as Donna in the dramas, as well. Together, Tennant and Tate will voice Doctor Who – The Tenth Doctor Adventures: Technophobia, a story set in futuristic London, as well as Time Reaver, which is set on a mechanical planet called Calibris. Finally, Death And The Queen is one for the hopeless romantics between us, telling a love story set in the picturesque land of Goritania.

Frankly, I can't think of anything better. Donna was absolutely legendary both on her own and as a companion, so getting her back — albeit in a smaller way — alongside Ten is a dream come true and will appeal to the nostalgic among us. Not only that, but I bet the audio dramas will be great, as well. Sometimes they really hit the spot when you're too busy to watch the show but want something engaging to listen to while you're going about your day.

Now here's the bad news: The new Doctor Who Audio Dramas aren't going to be released until May 2016, so we still have a while to wait until we get to catch up with Ten and Donna again. However, time flies, and it'll be here before we know it — in the meantime, it's good to know we have something so amazing to look forward to really soon.