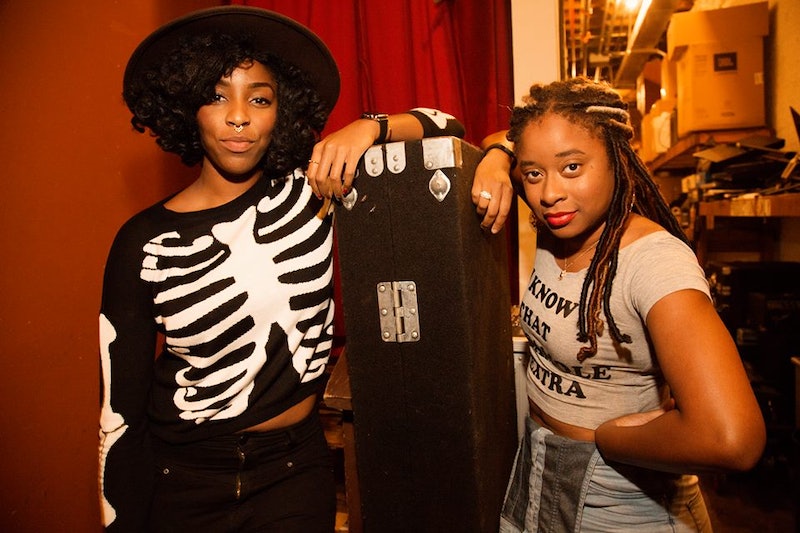 If you're a fan of The Daily Show, there's no doubt you know Jessica Williams. You know, the Senior Beyoncé Correspondent who brings the world hilarious and so, so accurate segments about women? And, if you follow stand-up comedy, there's a good chance you've heard of Phoebe Robinson and seen her humorous takes on everything from race to dating to pop culture. While they're both known for their own things, Jessica Williams and Phoebe Robinson are actually friends who work together on a comedy show called 2 Dope Queens, (formerly Blaria). Of meeting each other, Robinson tells me during a phone call with both ladies, "I was like 'I’m Phoebe nice to meet you!” and she’s like, “I know who you are!"

The two comediennes first met on an elevator ride when Robinson was doing background work on a project. They started chatting and Robinson asked if Williams would be interested in being a guest on her podcast, Blaria, which was also the name of her blog and her comedy show. I was like “Hey would you ever want to do my Blaria podcast, which makes sense because you know my Blaria blog, and I’ve had people like Wyatt [Cenac] on, so it’s not some super shady low-budget thing," Robinson says.

They ended up doing an episode together and when Williams mentioned that her birthday was coming up, Robinson asked what she wanted. "She says that she’s always wanted to do standup," Robinson explains. "And I was like, 'Do you want to do stand-up on my show? I run a monthly show and this weekend we can host it together it’ll be fun.' And so we ended up doing it and we really hit it off."

This was how Blaria came to be hosted by both women, but the story behind the name is far more connected to Robinson. Blaria is short for black Daria, a reference to the animated series that aired on MTV in the late '90s and early 2000s. "Like, two or three people had separately been like, 'You’re such a black Daria.' Just like dry and sarcastic," Robinson says. "And I was like, that’s weird that multiple people have said that."

Williams got involved in the live show after befriending Robinson and appearing her the podcast, but now that the show is equally about both women, they've decided on a name change. "2 Dope Queens is like both Phoebe and I put together," Williams says. "We’re both in this together, so we should have a name that reflects our union. Our civil union." She continues of the comedy show, "We enjoy each other and love each other, and it's really fun to spread that positive energy to others."

As for what you'll hear if you attend a 2 Dope Queens show, Robinson says, "We don’t really sit down with like a specific plan before each show and be like, 'These are the issues that we want to tackle.' We just want to be funny ... That's really the goal, just to be funny first and then, you know, whatever comes up, whether we talk about something serious or something crazy like the whole Rachel Dolezal thing..." Williams adds, "We’re not trying to be like super message-y. We don't force it."

2 Dope Queens is held twice a month, with one show focused on storytelling and one on standup. "We’ll have the first show of the month with a storytelling theme. So, we’ll definitely still have standup comics on, but we’ll also have storytellers and people from all walks of life. And anyone who’s like super dope and cool and New York-y will definitely be on the show. And the second show of the month will just continue being strictly standup," Robinson says.

To check out 2 Dope Queens yourself, be sure to follow the show's Facebook page for upcoming events.