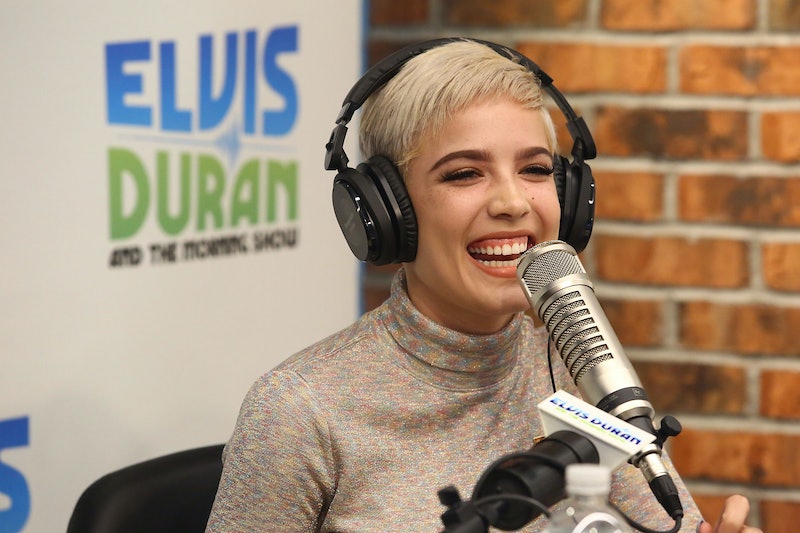 Justin Bieber has been hard at work promoting his upcoming album Purpose and he just shared an awesome piece of news. Halsey, one of the celebs who helped promote "What Do You Mean?," confirmed that she'll be duetting with Bieber on "The Feeling." Halsey announced the news in a short video that was posted to Bieber's Twitter account. The collaborating will appear alongside other features, such as Travi$ Scott and Big Sean.

In an interview at the 2015 Wango Tango, Bieber spoke about the vibe of Purpose , explaining (via Fuse), "Overall, I'm just happy with the place I'm at creatively. I feel like this is probably the best I've been. There's not really a direction. It's like, uplifting music that people can dance to ... it's a little different, it's really uplifting and people are going to smile when they listen to it."

Given that description, it totally makes sense that Bieber would team up with Halsey. She burst onto the mainstream scene earlier in 2015 with "Ghost" and her album Badlands has been getting rave reviews. In an interview with Billboard, she explained, "Kids I grew up with are going off to college, having threesomes in ­bathrooms and 'vaping' beer, but I went through my sex, drugs, loss and existential confusion phase at 17." It's this search for identity — as well as the assumption that she now has more answers — that makes her a perfect fit for Bieber's new project.

Sonically, Halsey's sound also meshes well with what Bieber's given us from Purpose. Badlands has strong currents of electropop, but with a cohesive polish. It pairs well with the EDM-tinged songs of Purpose, but stands to lend some diversity as well.

Although we don't know much more about "The Feeling," we'll be able to hear it when Purpose drops on Nov. 13.