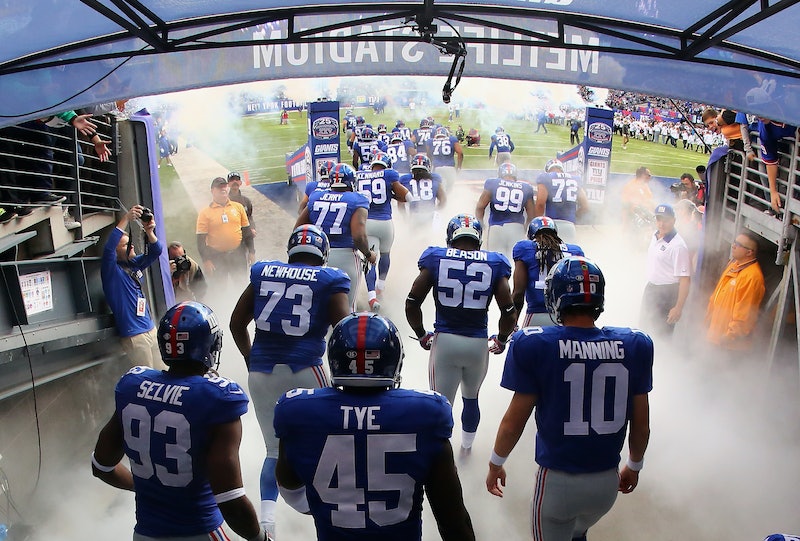 Organized sports don't always have the best history with inclusiveness, which is why it's so inspiring to see the New York Giants support LGBTQ athletes. Sports have a storied and problematic past with LGBTQ players, but it does genuinely seem like things are changing — especially in the wake of Caitlyn Jenner, who, if you've been living under a rock and just emerged to read this article, is a transgender athlete, and was awarded an Arthur Ashe Courage Award at the ESPYs this year. This video released by the NY Giants is another sign of that change, promoting the You Can Play Project, which supports LGBT athletes, coaches and fans.

The video doesn't actually mention any words like LGBT, "homosexual," or "gay", but regardless, the message is clear, as it's repeated over and over: "If you can play, you can play." The video ends with a plug for the You Can Play Project initiative, and although the language is not explicit, the message is powerful — and, I hope, meaningful. At least insofar as it promotes inclusivity in a culture that is not traditionally inclusive, and that still has a lot of very old fashioned fans. The video features members from the current Giants team, and according to Google, also includes Hall of Fame linebacker Harry Carson. (I might be excited about football players endorsing LGBTQ rights, but that doesn't necessarily mean I know who those footballers are.) I would like to shake their hands for the sentiments though, and don't tell my Seahawks fan boyfriend, but I might become a Giants fan now...

1. For The Giants, Inclusion In Sport Is Pretty Cut And Dry

4. Because Everyone With Sports Skill Deserves A Chance At Sport, Free From Arbitrary Discrimination

Watch the whole PSA below:

More like this
How To Use Festify, A Spotify Plug-In
By Emma Carey
23 Abortion Funds In States With Trigger Bans To Donate To
By Emma Carey
Spice Girls’ Net Worth: The Richest Member Is Wealthier Than The Rest Combined
By Hugh McIntyre
Here's Your Daily Horoscope For May 16, 2022
By Mecca Woods
Get Even More From Bustle — Sign Up For The Newsletter