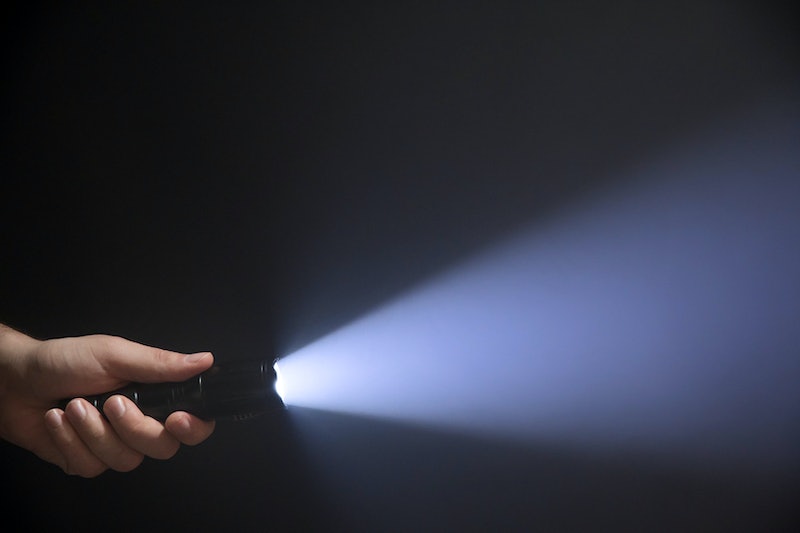 Have you ever had a flashlight give out at the worst possible moment: While lost in the woods, when the power goes out, or, in the spirit of Halloween, while you're ghost-hunting in a place that turned out a little too paranormal? Watching your only source of light flicker and go out is a terrifying feeling, but thanks to Lumen, the body heat-powered flashlight, we won't have to worry about not seeing the things that go bump in the night anymore, which... isn't all that appealing, when I put it that way. Maybe I'll feel better about it once Halloween is over.

According to its Kickstarter, Lumen uses a thermoelectric generator (TEG) to produce a small electric current when there is a significant enough temperature difference between the upper and lower parts of the device. Luckily, your body temperature is just about perfect for the amount needed to create enough juice to power a single LED — a fact that creator Ross Zhuravskiy put to use when he created the prototype for Lumen. According to the Daily Dot, he got the idea for his heat-powered flashlight when his mercury-vapor factory lamps proved inefficient in the long run. Some extensive Google searching later, and voila! Zhuravskiy had the concept; all he needed was working prototypes, which eventually morphed into Lumen.

Although the Kickstarter initially set its goal at just $5,000, the project has received almost $100,000 in donations so far, and it still has two weeks left to go. He's not the first to come up with the idea for alternatively-sourced lights, or to harness warmth as a source of power — solar-powered flashlights have been around for some time, and Power Practical is a company entirely devoted to phone chargers, batteries, and other such electronics powered by TED, just like Lumen. In fact, high school student Ann Makosinski created a working prototype of a TED flashlight known as the Hollow that won an award at the 2013 Google Science Fair.

However, the Lumen will be the first instance of commercial production of TED flashlights, largely because Zhuravskiy already has access to materials in his factory that can produce them easily. In theory, this could spell the end of the battery-powered flashlight era; as Zhuravskiy puts it, the Lumen provides an "everlasting light source" for users. Forget hoverboards and self-lacing sneakers. The future is now, people — as someone who spends way too much time reading creepypasta and then freaking out when their computer dies, taking the only source of light with it, I'm so here for it.

More like this
Remember These Ancient Pieces Of '90s Tech?
By Lucia Peters and Emma Carey
This App Tells You If Your Skin Care Products Are Working — So I Tried It
By Amanda Ross
What Does “Gatekeeping” Mean On TikTok? The Viral Term, Explained.
By Courtney Young
How To Use The Shook Filter On Snapchat, TikTok, & Instagram
By Emma Carey
Get Even More From Bustle — Sign Up For The Newsletter