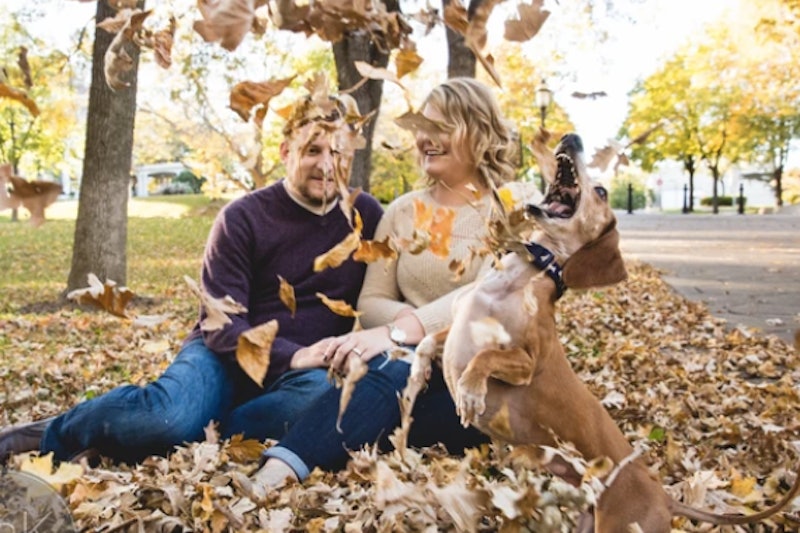 Here in the South, we tend to overindulge our pets — let's just say our dogs own just as much in the way of monogrammed apparel as we do. As such, it does not give me a moment's paws (couldn't resist) when I hear of someone carting their four-legged friends along for family vacation — or, in the case of Louie the photobombing dachshund, inviting them to take part in special occasions like the commissioning of engagement photos.

Such was the case for Megan Determan and Chris Kluthe. The Minnesota couple decided to include Determan's dachshund, Louie, in the photos they'd enlisted Karin Berdal of DnK Photography to capture in commemoration of their newly engaged status. It wasn't an off-the-wall request, according to Berdal, who explained on DnK's blog, "We've taken a lot of sweet, fun, and wacky photos with pets." Louie, though — well, this plucky little fellow took it next level. "Megan and Chris mentioned that Louie enjoyed playing in the leaves, but I wasn't quite ready for HOW MUCH!" Berdal said. For all his cute looks and wholesome leaf frolicking, Louie was a dog with a nefarious agenda: to reclaim his rightful spot as the sole focus of Determan's affection.

In doing so (and in Berdal capturing it), the world was treated to a rare glimpse into the thought-process of a serial photobomber. Oh, yes, I said serial. "Turns out this isn't the first time Louie has photo-bombed Chris, and Megan is starting to suspect a little bit of jealousy," Berdal noted, laughing. So, here it is, my friends: the anatomy of an epic photobomb, courtesy of camera-lovin' Louie.

Step 1: Lull Subjects Into a False Sense of Security

Nothing to see here, guys! Just a dachsund who loves romping in the leaves. As you were.

Step 2: Subtly Move Yourself Into Position

He's so cute, they said. He's just burrowing in the lovely fall foliage, they said. But look at Louie's eyes — this pup is locked in on that lens. That move was strategic.

Whilst Determan and Kluthe lock lips, Louie holds his pose. These things can't be rushed, y'all. It's like baking a soufflé — if the timing isn't perfect, the end result will fall flat.

They're watching! Quick, act like you're a dog who is entirely absorbed in his own little world of leaf tossing.

Step 5: Move in for the Kill

All systems are a go. Louie has now achieved optimal positioning and timing to completely and utterly replace his mom's future husband in this would-be romantic moment. Score one for the little dudes.

And, because Louie is clearly a guy with follow-through (perhaps he's related to the photobombing royal family), he continues to steal the spotlight from the unwitting couple canoodling behind him.

Ahh, yes. Something tells me Kluthe can look forward to a long future with his new family full of the jarring midnight phenomenon known as "cold nose meets warm legs."

Of course, this is far from Berdal's first experience with pups crashing the engagement pic party. Here are a few fellow canines whose camera-ready looks are the envy of dogs with engaged parents everywhere:

Dogs pretending to be humans is a genre of dog as timeless as time itself.

Honestly, humans are great and all, but what are we even if there isn't a dog to photobomb our pictures?