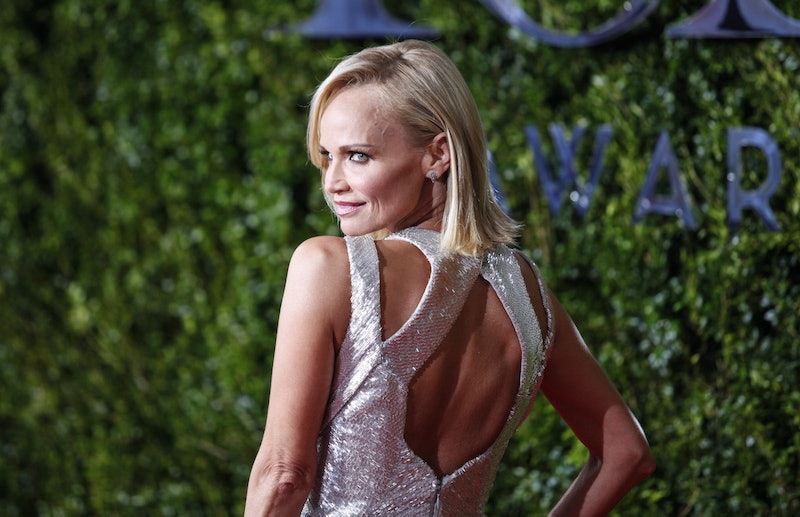 I'm thrilled to add another item to the category of "Things Kristin Chenoweth Does That We Care About" — which is really the exact same category as "Things Kristin Chenoweth Does" — with the news that Chenoweth will voice "Fifi" in The Peanuts Movie , which will be hitting theaters on Nov. 6. Eeee! So exciting! I wasn't on the market for more reasons to be excited about this animated feature, since I already had plenty, but this will certainly do. Fifi is a sweet little pink poodle who's set up as Snoopy's love interest, but also more than holds her own as his equal. She lives in Paris and even has her own plane that she flies around, something that the two pups have in common, so don't expect to see her fading demurely into the background.

As Chenoweth explains in her description of the character, "Fifi's a smart, spirited poodle and she has some great pink accessories. She's a dog, but she has this feminine way about her while still being very much Snoopy's equal." I know it's not even a live-action film, and these are dogs we're talking about, but I love this attitude, and I think it's super necessary. I'm always so relieved when we come up with something to show kids that aren't the traditional gender roles that have so grated on me my whole life.

Sure, Fifi has a "girlie" name, and she likes pink, but that doesn't mean she should be taken any less seriously by Snoopy or by the audience. Or by Chenoweth, for that matter, who has a soft spot for Peanuts ever since her performance as Sally in You're A Good Man, Charlie Brown on Broadway launched her career and earned her a Tony Award in 1999. "I really did this because it's something close to my heart," she said. "I'll always remember my history with the family and Peanuts. It seemed like the right and most natural thing to do."

Hurray! Everything's coming full-circle! This is the perfect project for Kristin Chenoweth, and I can't wait to see what she does with it. Especially since the character of Fifi has never had a voice before, despite being introduced by Peanuts creator Charles Schulz all the way back in 1980.

The trick was to invent Fifi's language and make it emotional, without words. It was vocally challenging. I used Snoopy as my guide and did a female version. And it gives a personality there.

Yup, don't have to talk me into it any more — I'm there. Can't wait to see Chenoweth knock it out of the park without saying a single intelligible word.