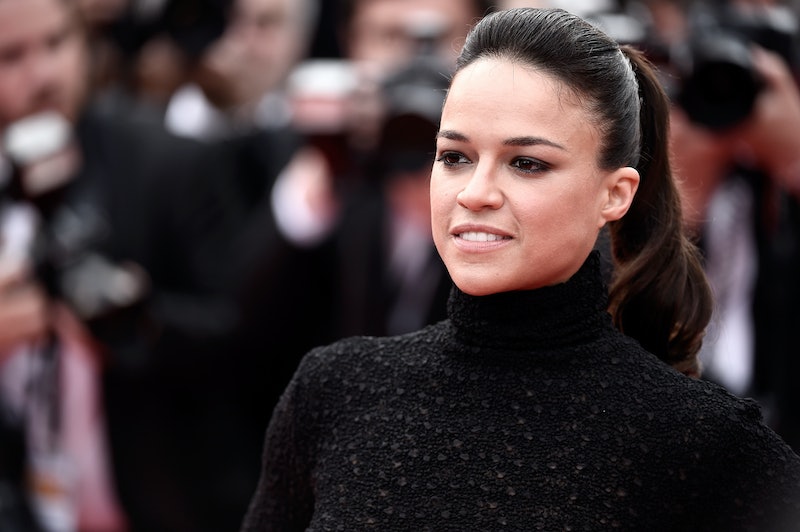 According to The Hollywood Reporter, Michelle Rodriguez is set to star in Tomboy , a new thriller from director Walter Hill. In the project, according to the site, Rodriguez will play a male expert assassin who lands on the operating table of a dangerous surgeon (played by Alien star Sigourney Weaver) who performs sex-reassignment surgery on Rodriguez's character — prompting the assassin to seek revenge on the surgeon. Based off this description, the film certainly has the potential to be problematic — turning this kind of surgery into a punishment for which one would seek revenge has the potential to trivialize the experiences of many transgender people.

Though there is ample opportunity here to explore the concepts of identity and gender roles, based on the plot, Tomboy appears to be using sex-reassignment surgery as a negative and aggressive punishment, which makes me uncomfortable knowing how important the surgery is for many transgender people who use the surgery to confirm their true gender. Many people outside the transgender community still do not fully understand the importance of the surgery or the fact that is actually a very private process.

Taking this procedure and turning it into a plot device for a revenge story could further muddle what people understand about the surgery. What's more concerning is that sex-reassignment can be an arduous, expensive process, and the film's bare bones description makes me worried that the full picture will not make it into the film. Plus, there's the added insult, which is that many trans people cannot afford this surgery, and turning this privilege into a punishment could come off as a bit insensitive.

If Rodriguez's character was originally a cisgender man who was made to undergo sex-reassignment surgery against his will, then that surgery rendered the character a transgender man. But, Rodriguez's character cannot be identified as transgender until there is more to the character's description than what is being offered at the moment (which could very well be the case). Since the assassin's reaction is one of rage, the surgery is clearly not something that he wanted or was considering, which could also be somewhat problematic. Still, there is a chance that the film could be done right, and be sensitive to the subject matter while creating a situation in which Rodriguez's character explores their identity more deeply. And if the film accomplishes this task, we could also see two memorable roles for superb actresses who rarely get to dive into truly challenging material anymore. After all, Deadline is describing Tomboy as a tale "of self-discovery and redemption," so hopefully it'll approach the sensitive areas of the plot with nothing but complete and total respect.

What gives me more hope is the fact that, Rodriguez is a member of the LGBT community and an advocate for equality in general, and I doubt that she would join a film riddled with insensitivity. So I have some hope there is going to be way more going on in Tomboy than a very sensitive process used as an action movie gimmick.

There are also many, many ways Tomboy could go wrong, but it's not completely impossible for the film to do this right. The key will be to remain respectful to the transgender community throughout and not treat sex-reassignment surgery as a novelty plot device to spice up a typical revenge thriller. Featuring Rodriguez and Weaver as the leads has at least sparked my curiosity, but until Tomboy hits theaters, there will be no way to know how the film will handle the sensitive material at its core.