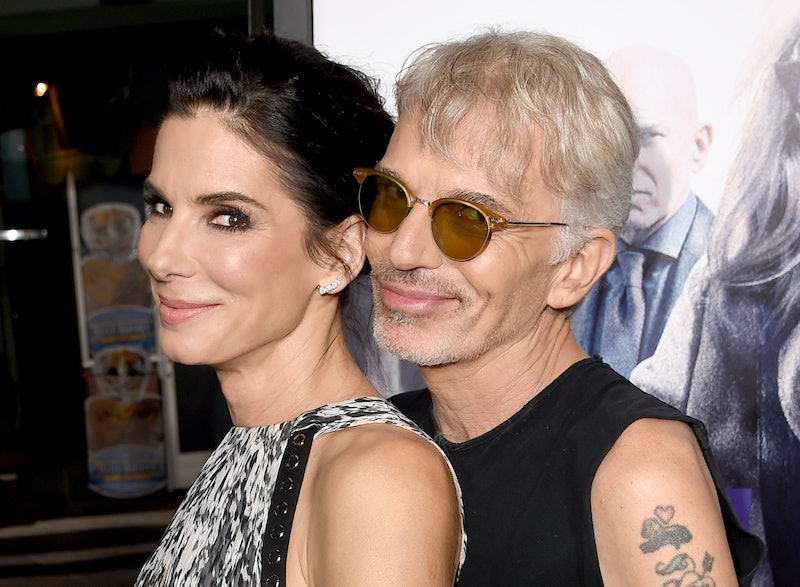 David Gordon Green's new film Our Brand Is Crisis , which stars Sandra Bullock, Billy Bob Thornton, and Anthony Mackie, puts a spotlight on political consulting and the lengths (and the lies) that some go to in order to win elections — whether they believe they are doing the morally sound thing or not. The film stars Sandra Bullock as "Calamity" Jane Bodine, a former hotshot political consultant who gets back in the game in order to go head to head in a Bolivian presidential election with archenemy Pat Candy, played by Billy Bob Thornton. Offscreen, Bullock and Thornton seem to get along swimmingly — in fact, Thornton told Bustle at the Our Brand Is Crisis premiere that working with Bullock was a "joy," — but their characters never quite get the chance to play nice. As depicted in the film, the world of political consulting is cutthroat and full of manipulation, most of which is seen in the personal battle between Bodine and Candy. Though we may root for Bodine to trump Candy, both consultants have questionable morals — and it may make us question just how far we, the audience, would go if put in their shoes.

"This whole world of political consulting, it's a strange world," Thornton tells Bustle of Candy's profession. "What's funny about it is that [political consultants] don't really care who they are working for. It's a job to them, it's a challenge." So, is Candy truly the "monster" that he likens himself to in the film? That depends on how you look at things, according to Thornton: "I think sometimes their personal morals are different from what they do for a job."

As for what Bullock thinks audiences should take away from Our Brand Is Crisis — other than a "great time" — it's the question as to how far you will go for your career. "[This story] is about consequences," says Bullock of Bodine's personal journey. "What [these consultants] are doing in this situation is hurting some people. Which ones will get off the carousel and which ones will stay on the wheel and keep doing it over and over again? That, to me, was an important question to ask."