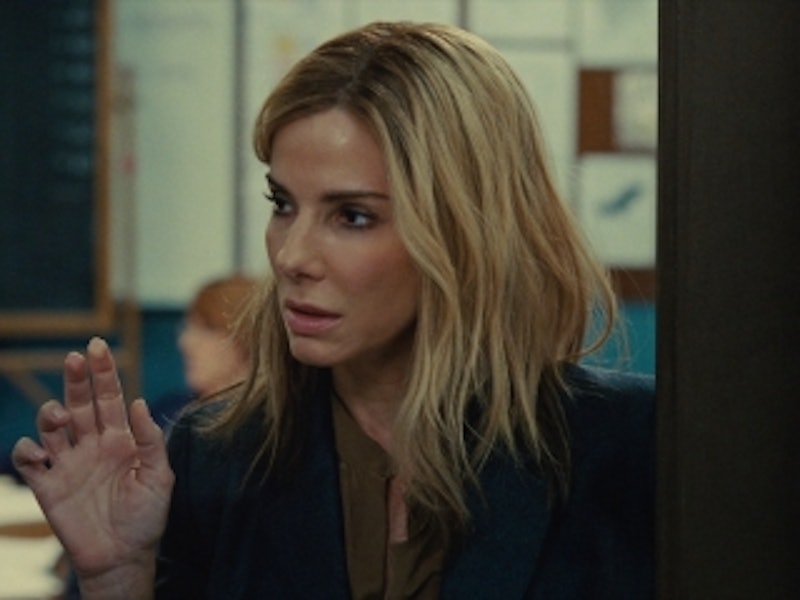 In the new film from producer George Clooney, Our Brand Is Crisis, Sandra Bullock stars as Jane Bodine, a former political strategist hired by an American political consulting firm to help a candidate (Joaquim de Almeida) win the presidency of Bolivia — the American way. It's based on the true story of the 2002 Bolivian Presidential elections, in which Gonzalo Sánchez de Lozada was elected the country's leader after enlisting the help of James Carville's firm Greenberg Carville Shrum and utilizing typical American campaign tactics, all at a time when the country was facing a failing economy and was on the verge of crisis. It's a crazy story, but Our Brand Is Crisis isn't the first time this tale is being told on screen. You can actually watch an Our Brand Is Crisis documentary online, a 2005 movie by Rachel Boynton that tells the real story behind Greenberg Carville Shrum's involvement in the election, rather than the fictionalized version presented in the new film (Bullock's character was invented for the movie). So if you're looking for the truth behind the Hollywood glam, you're going to want to watch the doc first.

While the Crisis documentary is not available for streaming on any online subscription services like Netflix or Hulu, you can still buy or rent it from a couple of outlets. Amazon offers the film for purchase (no rental) at the price of $9.99 in standard definition. Offering a slightly better deal is iTunes, who, in addition to the $9.99 SD purchase option, also offers a rental for the price of $2.99.

Bullock's version of Our Brand Is Crisis is based on the documentary, so if you think the movie looks good and want to see what really went down then it's definitely worth checking out. James Carville is also in it a bunch, so that alone is almost enough of a reason to watch it since he's always so entertaining — even when he's not being portrayed by Bill Hader. If you're still not sure what to expect, check out the documentary's trailer below, and then see the more fictional Hollywood version of Our Brand Is Crisis in theaters on Oct. 30.