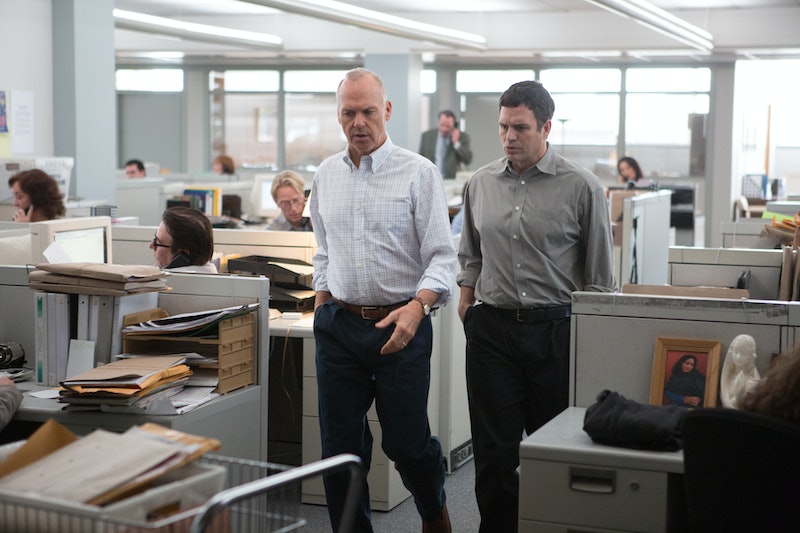 Given how readily available information is to the Google-searching public of the 21st century, a movie like Spotlight feels almost old-school, or at least a throwback to the days of Watergate and All The President's Men. But the conspiracy that the new drama's journalists dedicate themselves to exposing is one that ran deep in an institution that is meant to be sacred, and put thousands of people who trusted that institution to keep them safe in danger. Spotlight tells the true story, albeit a dramatization, of the Boston Globe's elite "Spotlight" team's relentless pursuit of proof to expose the Catholic archdiocese of Boston and its systematic cover-up of rampant sexual abuse.

In 2001, the Boston Globe's team of investigative reporters, led by Walter V. Robinson (played by Michael Keaton in the film) began looking into the the seemingly random manner in which the the state's Catholic leadership shuffled priests around its parishes. What they ended up uncovering was an epidemic of avoidance and secrecy with ripples that were felt nationally, and then worldwide. Priests who were accused of abuse would be transferred to another location within the state. They were never removed from direct contact with the public, and were free to seek out new victims from their next post. The "Spotlight" team won a Pultizer Prize For Public Service for their series of pieces on the unconscionable corruption.

The journalists who led the charge in the Catholic church exposé will see themselves on-screen when Spotlight opens on Nov. 6. Director and co-screenwriter Tom McCarthy pulled no punches when he told Variety how he and his writing partner Josh Singer see the reporters, played by Mark Ruffalo, Rachel McAdams, and Liev Schreiber, among others:

At the beginning of this they were our heroes. They still are our heroes. Those reporters are heroes. The work was heroic; that’s once-in-a-generation reporting. It has a world impact, that story. We’re still feeling it.

This film is firmly on the side of the crusading journalists who put a stop to the ethically and morally repugnant practices, and on the survivors whose bravery helped them to do it. Most of the main ensemble were even able to spend time with the individuals they were portraying, a few of whom wrote about their experiences in seeing their story adapted for the screen for the Boston Globe. "My persona has been hijacked," Walter V. Robinson joked. "If Michael Keaton robbed a bank, the police would quickly have me in handcuffs." Reporter Michael Renzedes said that his sit-downs with portrayer Mark Ruffalo involved him "grilling me for hours about the ins and outs of reporting while trying to understand, as completely as possible, why I remain so dedicated to investigative reporting." The actors were clearly determined to get this right.

The Boston Globe itself has a portal on its website dedicated to the film, the journalistic work that inspired it, and the follow-ups that have been published in the years since. So there's little question that the paper and its reporters are fully supportive of the version of events that's depicted in Spotlight. Though in the clip below, Ruffalo maintains that the film is not an attack on the religion as a whole.

Still, the stark point-of-view of this movie has me wondering where and when the controversy will begin to show itself. There's been no organized response yet from the Catholic church; perhaps it's avoiding the topic out of shame. But even truths can be nitpicked by the biased, and I expect that Spotlight will provoke passionate discussion in Boston and around the world.

More like this
Sandra Bullock, Girlboss Extraordinaire
By Matt Harkins & Viviana Olen
Danny Boyle's 'Pistol' Explores The Extreme Highs & Low Of An Iconic '70s Band
By Rachel Mantock
Harry Styles Called For "Backlash" In Powerful Statement On Abortion Rights
By El Hunt
Twitter Was Saying The Same Thing About Sam Ryder’s Surprising Eurovision Result
By El Hunt
Get Even More From Bustle — Sign Up For The Newsletter