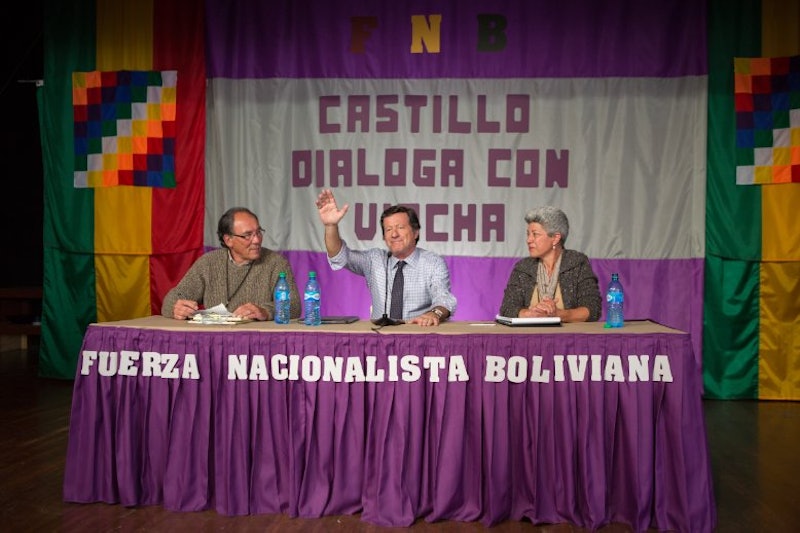 More than a battle of political ideologies, the election scenario of Our Brand Is Crisis is a battle of personalities; namely, Pedro Ignacio Castillo, the underdog, maybe-corrupt former president facing off against Victor Rivera, the vigorous, idealistic newcomer who leads the polls. It's never entirely clear what platforms they're each running on. They're running against each other, and that's what matters. In order to pull ahead, the campaign has to brand itself, has to sell something, says Castillo's political consultant Jane Bodine (Sandra Bullock). "Our brand: crisis," she announces. But the politicians are followed around by their relevant acronyms — FNB for Castillo, and MCB for Rivera. They're emblazoned on badges, banners, and leaflets, though rarely mentioned aloud. What do the political acronyms in Our Brand Is Crisis mean, though?

Like the candidates themselves, the acronyms of Our Brand Is Crisis, and the political parties they denote, are fictionalized versions of the factions competing in the 2002 Bolivian presidential elections. But after establishing the parties involved with loosely affiliated letters, the movie doesn't really delve into what each system entails. What would a Bolivia look like under the FNB? The politicians instead are representative of how an election is really an attempt to sell a product, rather than a face-off between autonomous figures. Perhaps it's not even a battle of personalities; it's a battle of salesmen.

Castillo's FNB stands for Fuerza Nacionalista Boliviana, which roughly translates to Bolivian Nationalist Force. It's based on the Movimiento Nacionalista Revolucionario, a leftist party that was one of the foremost political organizations in the country in the 20th century. But Castillo's inspiration, a politician named Gonzalo Sanchez de Lozada, was ousted in 2003 (just a year after his election). In the aftermath, the North American Congress on Latin America described the party as "a largely irrelevant political party today."

Rivera's MCB is a Democratic Socialist party, based on the MAS (Movimiento Al Socialismo) that Rivera inspiration and current Bolivian president Evo Morales is a member of. Though I couldn't track down the actual party name behind the fictional acronym, it's likely something along the lines of Movimiento Ciudadano Boliviana, if other local party acronyms are any indicator. According to the Bolivia Information Forum, a UK-based lobbyist bureau, the MAS currently holds a majority in Congress in addition to being the president's party (Morales was elected in 2006 after Sanchez de Lozada was forced out of office).

The real party system is broken up even further for the sake of the plot in Our Brand Is Crisis. Another frontrunner, Velasco, remains ahead of Castillo but behind Rivera. Jane doesn't seem to think him a viable winner, so she gives him a little leg up in the race — the U.S. ambassador makes a speech indicating that he'll crack down on cocaine trafficking, pulling votes away from Rivera and towards the anti-U.S. Velasco, as well as Castillo. This event actually played out between Sanchez de Lozada and Morales in the 2002 election — former U.S. ambassador Manuel Rocha made a speech alluding that if Morales were to win, it might cost Bolivia its much-needed U.S. aid, according to a speech Morales gave at Columbia in 2008.

The film isn't fully concerned with party affiliations of its key figures, or that the party divisions accurately reflect the politics of the time. On the one hand, that makes sense — the film is a fictional account, and quotidian political decision-making does not exactly make for high drama. On the other hand, party politics might not even be fully relevant. After all, Jane is a saleswoman, not an ideologue. Her main platform is a battle cry of "socioeconomic crisis." In sidelining political affiliations, Our Brand Is Crisis actually underlines its own cynicism. Its presidential election runs on appearances more than an identifiable ethos, and at the end of the day (or the political term), it really is all branding. And Castillo's brand is not FNB. It's crisis.