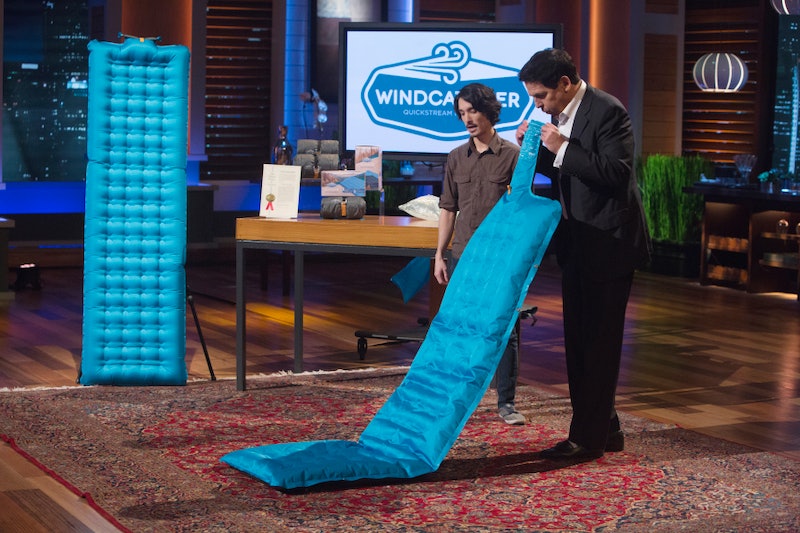 I have slept on many an air mattress in my day, and it's always a pain in the butt to inflate those things with the pump that accompanies them. I can only imagine what it's like to blow up an air mattress with your own two lips and breath and then have it be full enough and strong enough to be comfortable while sleeping on the ground out in the wilderness while camping. However, the Windcatcher AirPad 2, one of the products appearing in Friday night's episode of Shark Tank makes that actually seem easy.

Though I can't really say whether or not the Sharks are big on sleeping out in the great outdoors instead of on their King-sized beds probably covered in the finest Egyptian cotton in their multimillion dollar homes, the technology behind the Windcatcher AirPad 2 is so impressive, it should make anyone interested in taking a closer look. And now's your cue to do so.

You'll Be Sleeping On Air — Literally

The Windcatcher AirPad 2 is an air mattress that uses some special technology to inflate just by having someone blow into it (more on that later). It's not to be confused with with the children's book by Avi of the same name or a dreamcatcher, although both of those can help you get to sleep, too.

No Mouth Required (Sort Of)

Though you have to blow into the Windcatcher AirPad 2 to inflate it, your mouth never actually touches it. How is that possible, you ask? Instead of having a conventional air mattress valve, the Windcatcher AirPad 2 has a large opening that uses what the company is calling Quickstream Inflation to not only blow up the mattress with the air that you're supplying but also the surrounding air, which is how it's able to become inflated so much faster. Just think of what you can do with your life when it's not spent blowing up a glorified balloon.

It Can Blow Into Your Life Right Now

Ready to try out the Windcatcher AirPad 2 for yourself? Good, because you can take this baby out for a spin now. The air mattress is available for purchase through the company's official online store for $99.95. It even ships at the respectable pace of two to five business days. It doesn't blow in from the wind quite the same way as, say, Mary Poppins, but it's close.

It's Already Been On TV

Ryan Frayne invented the Windcatcher AirPad 2 after seeing his brother try and fail to inflate a toy at the beach with his breath. He has a patent for his inflation valve, which is something that's not easy to get and is sure to impress the Sharks, especially Lori Greiner, who holds 120 U.S. and international patents herself. As president and head of R&D for the company Oceanic Innovation, according to his LinkedIn page, Frayne is always coming up with ideas for new products. But if the Windcatcher AirPad 2 gets some love from the Sharks, it's possible that it could become his one and only project.

He Really Wants You To Be Able To Sleep Anywhere

After revolutionizing the air mattress, Frayne brought inflation to the backpack, of all places, with the self-inflating Air Pakk. This serves as a backpack for when you need to carry around all of your stuff and a cushion that can help you nap pretty much anywhere you can rest it on. Beyond making the product available through this Kickstarter campaign launched last year, it doesn't look like you can currently buy the Air Pakk. However, if the Windcatcher AirPad 2 does well on Shark Tank, maybe this accessory could see a revival, too.

More like this
JoJo Fletcher & Jordan Rodgers Got Married In A “Playful & Fun” Wedding
By Grace Wehniainen
What’s New On Netflix: A Victoria Justice Rom-Com & The Return Of David Letterman
By Arya Roshanian
The Richest 'Bling Empire' Cast Member Is...
By Hugh McIntyre
Twitter Is Upset About The 'American Idol' Top 3 Results: "Who TF Is Voting?"
By Jake Viswanath
Get Even More From Bustle — Sign Up For The Newsletter