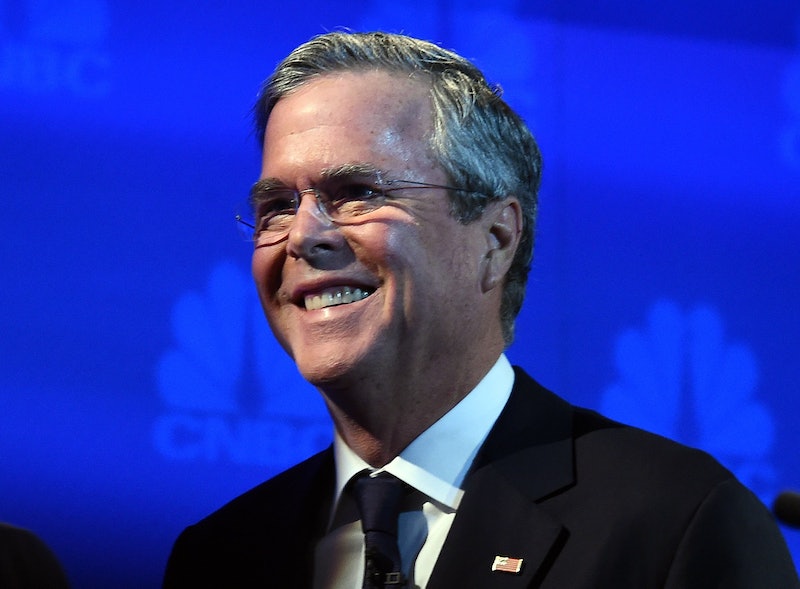 On Wednesday, Republican candidate for president Jeb Bush raised a few eyebrows and elicited quite a number of jokes when he offered a "warm kiss" to any Democrat who supported cutting government spending by $10. It was the first memorable thing he said all night. It's too bad the Internet didn't take the joke so warmly.

Unlike many of the candidates on the debate stage, Bush is not known for his boldness (*cough cough* Donald Trump). The former Florida governor probably should be known for having at least one laughable, memorable quote per debate, though. During the second GOP debate, for example, he admitted to smoking weed in prep school. This time, it was his outlandish offer to plant a warm kiss on a Democrat who was willing to compromise on taxes and government spending.

Particularly after the heated dialogue that occurred between Bush and fellow candidate Marco Rubio — who I thought were BFFs! — early in the debate, it's good Bush was in a joking mood later on. While it's unlikely that any Democrat would rush to accept a warm kiss from a Republican as prominent and recognizable as Bush, it also seems unlikely that the debate's viewers would want to see it happen.

Oh, Jeb. Maybe it's better to stick to politics.

More like this
Gillian Anderson's New Netflix Drama Is *Nothing* Like 'Sex Education'
By Frances Stewart
Matt Hancock’s TikTok Is The Most Matt Hancock Thing Ever
By Sam Ramsden
Eurovision Has Been Given A Whole New Look Ahead Of Its Liverpool Debut
By Bustle UK
The Internet Is Obsessed With These LEGO Flowers — Here’s Where To Buy Them
By Alexis Morillo
Get Even More From Bustle — Sign Up For The Newsletter
From hair trends to relationship advice, our daily newsletter has everything you need to sound like a person who’s on TikTok, even if you aren’t.