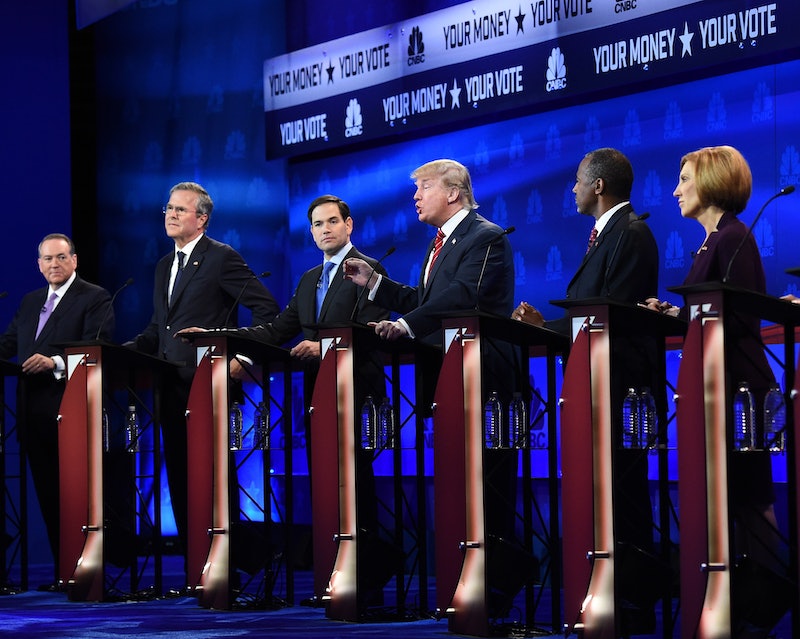 If there was a loser at Wednesday evening's debate among 2016 Republican presidential hopefuls, it may have been women's rights. The Republican candidates didn't appear too concerned with speaking to female voters, despite the fact that all of them seemed to view former secretary of state and Democratic presidential hopeful Hillary Clinton as their biggest threat from the opposing party. Luckily, plenty of Twitter users posted awesome — and hilarious — feminist tweets about the debate. Before the event, Clinton tweeted that "no one said a word about equal pay" during the first two Republican debates. Unfortunately, gender equality wasn't a huge part of this debate, and when it was mentioned, the facts weren't accurate.

Former Hewlett-Packard CEO Carly Fiorina, for instance, said that "92 percent of the jobs lost during Barack Obama's first term belonged to women," which simply isn't true. Fiorina also said that "every single policy under Barack Obama has been bad for women," which isn't true either. (Hello, birth control covered under Obamacare??) Texas Sen. Ted Cruz also tried to present himself as a champion of women's rights and gender equality in the United States, but his statements only emphasized the fact that he doesn't support reproductive rights. (In September, Cruz said that paid leave for workers shouldn't be required by the government.) But as Clinton pointed out on Twitter, "women — not the politicians on stage — should make decisions about their own health." And these Twitter users would agree.

On Women's Right To Healthcare:

On Fiorina's Claims That Obama And Clinton Were Bad For Women:

And One Tweet Which Sums Up The Debate's Discussion Of Women's Issues Entirely:

More like this
How To Support Gun Control Reform Right Now
By Morgan Brinlee and Carolyn Steber
Twitter Is In Utter Meltdown After 'Derry Girls’ “Poignant” Finale
By Sam Ramsden
Is TikTok’s “Villain Era” Trend Just An Excuse For Bad Behaviour?
By Chanté Joseph
Taylor Swift, Kerry Washington & More Speak Out On Uvalde Mass Shooting
By Jake Viswanath
Get Even More From Bustle — Sign Up For The Newsletter