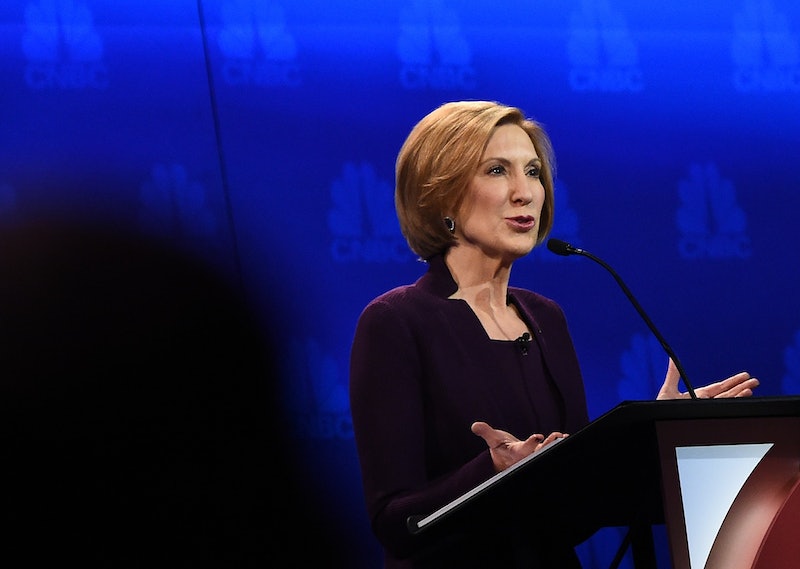 Carly Fiorina sought to capitalize on her position as the lone woman on the Republican presidential debate stage Wednesday night, arguing that President Obama and his administration did nothing for women's economic empowerment and pitting herself against the Democratic Party's lone woman candidate Hillary Clinton. But then she threw out a contentious statistic about women and the recession that already embarrassed one big-time Republican candidate — Mitt Romney — in 2012. While Fiorina is correct that American women need sound economic policies more than ever, the former Hewlett Packard CEO has yet to prove herself as an advocate for women. It seems the right way for women in America to move forward, according to Fiorina, is her very Right way that undercuts critical services for women.

Fiorina's big moment Wednesday night was essentially an abridged televised version of her recent (and flawed) Wall Street Journal editorial, in which Fiorina blamed the Obama administration, Clinton included, for harming American women financially. "For Mrs. Clinton to talk about being the first woman president when every single policy she espouses ... has been demonstrably bad for women," Fiorina said during Wednesday's CNBC-hosted debate to modest applause. "Ninety-two percent of the jobs lost during Barack Obama's first term belonged to women."

It's an astounding percentage — so astounding that it's pretty much false. This percentage can be traced back to Romney's 2012 campaign, when it was promptly proved "mostly false" by Politifact. But in some ways, it's a good thing Fiorina brought up this flawed statistic. It reveals just how much women are in need of economic policies that support them and their families.

As Glenn Kessler of The Washington Post explained in 2012, men were actually the hardest ones hit by the recession of 2007-2008, losing 3.2 million jobs compared to 1.8 million for women, which spawned the term "mancession." But in the recovery period, men benefited more than women. "In other words, men did lose more jobs in the recession," Kessler wrote in 2012. "Now that the economy is growing again, men are recovering jobs at a faster pace than women."

So, what does this mean, exactly? Well, despite the male-heavy recovery, the recession was harsher on men than women overall. But it also shows that perhaps the workforce is still a rough place for women — something that Fiorina fails to acknowledge.

For instance, where is Fiorina on paid family leave and earned sick days, two policies that overwhelmingly affect low-income women and their families? According to the National Partnership for Women and Families, just 13 percent of the U.S. workforce is eligible for paid family leave. But for women, paid family leave could be huge for their personal finances and career mobility. A 2012 report from Rutgers University's Center for Women and Work found that a majority of new mothers with paid family leave end up staying in the workforce, and more than half have reported receiving wage increases. That same report also found that women who use paid leave after giving birth have a much lower likelihood of using public assistance and food stamps.

Yet Fiorina has publicly come out against federal family leave legislation, even though she thinks companies that do offer paid leave for new mothers, such as Netflix and her own Hewlett Packard, are doing the "right thing." Although Fiorina has praised these companies, she leaves out one little thing: low-income women, such as those working low-wage or non-salaried jobs outside of Silicon Valley, are in desperate need of paid family leave. In New York alone, just 5 percent of women in the lowest wage quartile — $38,000 for a family of three — were eligible for paid maternity leave, according to a May 2015 report from the Community Service Society. These women were more likely than their higher earning counterparts to feel pressure to return to work quickly after giving birth; suffer from depression and stress; or lose their jobs entirely because of the need to take off for delivery and recovery.

In addition to mandated paid family leave, Fiorina also supports defunding Planned Parenthood, which provides health services to millions of low-income women each year, as well as repealing the Affordable Care Act that includes the birth control mandate. The latter has helped American women save at least $255 a year, according to new research published last July in the journal Health Affairs. The study's lead author, Nora Becker, told Kaiser Health News that women were spending, on average, "about 30 to 44 percent of their total out of pocket (health) spending just on birth control."

$255 may not be much to Fiorina, but for many American women, that's much-needed money for rent, groceries, or savings. And of course, it's also worth mentioning that subsidized birth control, such as contraception provided by health clinics like Planned Parenthood, saves taxpayers money in the long run.

Maybe, Fiorina, it's time you check your privilege on the campaign trail.

More like this
How To Fight For Reproductive Rights, Based On How Much Time You Have
By Courtney Young
Sandra Bullock, Girlboss Extraordinaire
By Matt Harkins & Viviana Olen
The 'Hocus Pocus' Sequel Finally Has A Release Date & It Makes Total Sense
By Shannon Barbour and Radhika Menon
Michigan’s Governor Is “Going To Fight Like Hell” To Protect Abortion Access
By Andrea Zelinski
Get Even More From Bustle — Sign Up For The Newsletter