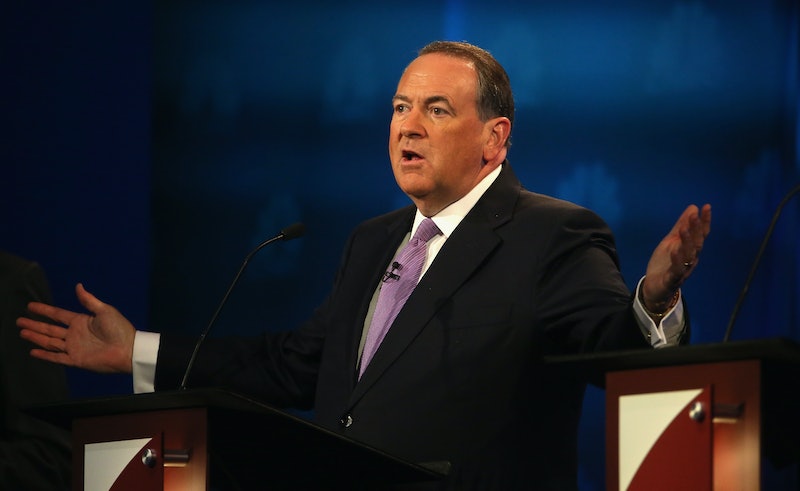 Wednesday's third GOP primary showing was something to behold. From in-fighting between candidates to a near all-out brawl between the Republican field and the panel of CNBC moderators, there was rarely a dull moment. Trying to make the best use of the ongoing rivalry between billionaire real estate mogul Donald Trump and the remainder of the Republican candidates, CNBC host John Harwood at one point attempted to steer the conversation into more explosive territory by asking former Arkansas Gov. Mike Huckabee whether he believed Trump had the "moral authority to unite the country," only to be met by a strange response from the governor about Donald Trump's ties (which are notoriously made in Mexico and China, of all places).

"Governor Huckabee, you've written about the huge divide in values between middle America and the big coastal cities like New York and Los Angeles," Harwood said midway through Wednesday's debate. "The leading Republican candidate, when you look at the average of national polls right now, is Donald Trump — when you look at him, do you see someone with the moral authority to unite the country?"

"I love Donald Trump," Huckabee replied smartly, adding that the last thing he needed to do was give Trump extra time to respond. "He is a good man — I'm wearing a Trump tie tonight, [so] get over that one, okay?"

It was a strange exchange, especially given the generally uncomfortable relationship between Trump and the rest of the GOP field. Nonetheless, the brief banter managed to lighten the atmosphere enough for the group to rally against the moderators once again, with Trump himself subsequently calling the initial query "such a nasty question."

Trump's desire to shift the conversation away from himself, however, didn't necessarily work, as both rival Jeb Bush and Twitter as a whole jumped at the chance to remind viewers of the tie's real origins.

"That Trump tie Huckabee is wearing was made in China or Mexico...BTW," tweeted Fusion's Collier Meyerson. GOP rival Jeb Bush also jumped in on the action, brazenly questioning out loud whether the tie had been "made in Mexico."

Huckabee's reply was a painfully obvious sidestep. The particular tie that the former Arkansas governor had donned for the evening was, in fact, a $50 purple silk number plucked directly from the Donald J. Trump Signature Collection — which, as BuzzFeed editor and Latino coverage reporter Adrian Carrasquillo (as well as several other media outlets) deftly pointed out this past July, is produced largely in Mexico and China, and was dropped by Macy's earlier in the year after Trump made disparaging remarks about immigrants in his campaign kickoff speech in June.

All that seemed to be forgotten on Wednesday night, however, as Huckabee proudly displayed his Trump tie to the audience of conservative voters, who applauded wildly. Even after the moderators pressed Huckabee for more details (host Carl Quintanilla notably asked whether the tie was made "in Mexico or China" as well), Huckabee refused to take the bait.

"Let me tell you," Huckabee responded. "Donald Trump would be a better president every day of the week and twice on Sunday, rather than Hillary."