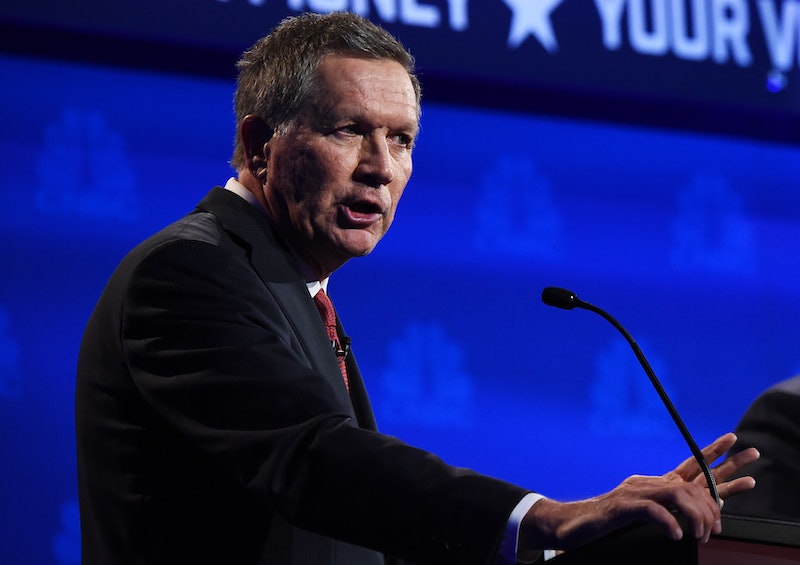 The third GOP presidential debate is now in the books, and there's a lot left for the fact-checkers, analysts, and observers to parse. And while John Kasich hasn't exactly been surging in the polls lately, he's been getting plaudits for his performance, and he was also at the center of one rather contentious moment with Donald Trump. But who was right? Did John Kasich really work at Lehman Brothers? Or was the golden-haired real estate magnate telling a fib?

The relevant exchange happened in the early stages of the debate, when Kasich decried some of the seemingly magical thinking some of his more successful GOP rivals have embraced, specifically citing Ben Carson's tithe proposal and Donald Trump's draconian immigration platform. This comes after remarks he made Monday that lamented the state of the modern GOP: "I've about had it with these people."

Trump being Trump, you could've guessed that this wouldn't go unanswered. He launched into a prickly rebuttal immediately following Kasich's remarks, calling the Ohio governor "lucky" that fracking boosted the economic fortunes of his state. Trump followed with a dig at Kasich's private sector career:

Kasich responded with a straightforward denial. "I wasn't on the board of Lehman Brothers," he retorted. "I was a banker, and I was proud of that."

So where does the truth lie? Trump is guilty on this one. Kasich was indeed a Lehman Brothers employee leading up to the 2008 financial collapse, but he wasn't on the board. He was, as Bloomberg detailed back in July, a "managing director" for the now-defunct mega-bank, which declared bankruptcy in 2008.

The knife cuts a little both ways, however. Kasich's characterization of himself as simply a "banker" is a little deceptive, given what most average people might imagine when they hear that word. In reality, as a managing director before his departure from the bank in 2008 (taking a more than $400,000 bonus with him), he possessed an uncommonly high-level position. As Bloomberg notes, only 700 or so people at Lehman were managing directors.

Regardless, Trump's specific claim was demonstrably false, and an overreach at that. Whether Kasich's Lehman ties give people pause in deciding whether to vote for him is one thing, and frankly, it's more than enough. But he wasn't on the company's board, no matter what Trump would like you to believe.