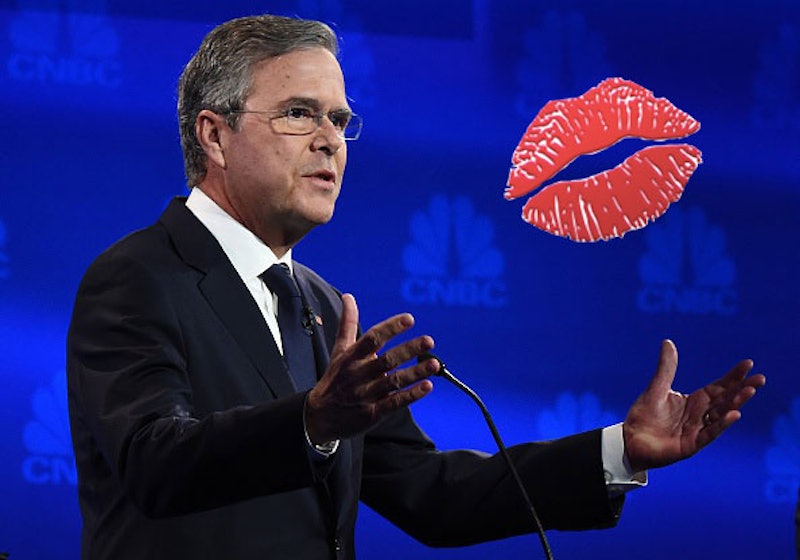 During the third Republican primary debate, the candidates were offering all kinds of things to win over voters. Ted Cruz offered a ride home, tequila, and some pot brownies, while Jeb Bush offered a nice warm kiss. There are some prerequisites to Bush's smooch offer, though — you have to be a Democrat, and you have to be down to cut taxes.

“Find me a Democrat that will cut $10, and I’ll give them a warm kiss,” Bush told the audience during Wednesday night's debate in Colorado. He was one of many candidates who attempted to blend humor into their performances. But Bush's joke didn't really go anywhere. And Twitter was kind of grossed out. Although it was a very kind offer on the former governor's part, on behalf of Democrats everywhere, I will pass. It's not you, Jeb; it's us. OK, maybe it's you a little bit.

But Bush might be on to something. Republicans seem to be big on incentives, so maybe Bush should start including additional incentives as part of his policy packages. Maybe Congress should get a pizza party every time they pass a bipartisan budget. Or when foreign leaders agree to a treaty, they get a cookie cake. I'm telling you, this could be the start of a whole new America. But before he can make these promises, Bush really needs voters to turn out for him. And that's just not going to happen when we're thinking about all the things we would rather have than his warm kiss. And it's kind of a long list.

One Perfect Eyebrow And One Terrible Eyebrow

Having To Pay Extra For Guac On Everything You Ever Order, Always

Getting Stuck Talking To Jim Webb At A Holiday Party

A Philosophical Discussion With Donald Trump About Racism

Having To Tell Mexico That Donald Trump Won The Presidency

Finding Out That Jon Snow Is Actually Dead

Having To Sit Through All 11 Hours Of The Benghazi Hearing

Having To Watch Minions Every Day For A Year

Wet Kisses From Literally ANY Democratic Candidate (Looking At You, Martin O'Malley)

I'm sorry, Jeb. I know this all seems so harsh. But if you just stop offering to kiss people, then maybe we can be cool again. Maybe.

More like this
Michigan’s Governor Is “Going To Fight Like Hell” To Protect Abortion Access
By Andrea Zelinski
How To Fight For Reproductive Rights, Based On How Much Time You Have
By Courtney Young
LGBT+ Men Fleeing Afghanistan Were Denied Asylum By The Home Office, New Findings Show
By Sam Ramsden
81 Epic Truth Or Drink Questions To Play 'Say It Or Shot It' With
By Bustle UK
Get Even More From Bustle — Sign Up For The Newsletter