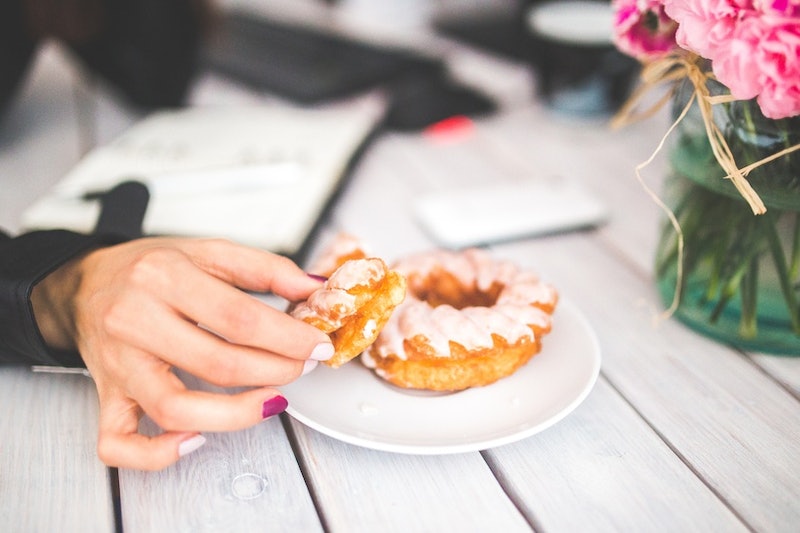 Being advised to try antidepressants by a doctor, but uncertain about which one might be right for you? You're not alone. After all, there's a big range on the market — and they're often prescribed for things other than depression, from sleep problems to trying to quit smoking, so you may be given the choice of an antidepressant for an issue that doesn't even have to do with mood. One of the most interesting side affects of taking antidepressants, though, has to do with appetite — our neurological craving for food, essentially — and how different antidepressants affect your appetite in different ways. It turns out that your choice of antidepressant can alter your appetite radically, either through increase or depletion.

Appetite isn't just "tummy rumbles" — that's a symptom, not the essence of hunger. In 2014, a Harvard team actually tracked down the specific parts of the brain that send signals about food cravings, a discovery that could lead to revolutionary treatments of obesity and diseases that involve uncontrollable appetite, like Prader-Willi Syndrome. Understanding the brain-based nature of hunger is key to sorting out which antidepressant does what to your appetite.

A note: antidepressants should never be prescribed or obtained purely for weight loss, except in the case of severe obesity. These are not magic pills for keeping off the pounds or putting them on, so don't view them as potential dietary supplements, or choose an antidepressant based on this factor alone. These are powerful neurological agents — which is why you need as much information about them as possible.

SSRIs, or selective serotonin re-uptake inhibitors like Zoloft, function by blocking the absorption of the neurotransmitter serotonin into the brain's cells, allowing it to flood the brain — and, the science goes, raise mood. But this serotonin flood looks like it also has an affect on appetite — though it's not the same for everybody, or indeed for most people who take it.

One of the first side affects of SSRIs is actually a temporary loss of appetite, but consistent use is linked to increased appetite and a corresponding small weight gain. The average weight gain of people on SSRIs, according to a JAMA Psychiatry study, rarely goes above two and a half pounds. But the phenomenon is a recognized one — and scientists think that some of that weight gain can be explained by better mood, which can naturally lead to something called "social eating" (going out with friends for dinner, for example, is more likely if you're not feeling depressed). But there's also another component, and it has to do with how that serotonin flood affects our brain.

The key thing to understand about serotonin is that it actually affects the part of the brain that controls appetite. Large, natural amounts of it have actually been linked to appetite suppression, but the artificial serotonin fiddling done by SSRIs seems to disrupt how the neurotransmitter interacts with the brain's appetite-bits. The result? Serotonin's natural appetite-suppressing qualities are dampened, and we end up with more hunger.

Wellbutrin, or bupropion, is an example of an atypical depressant, falling outside the normal lines of the industry. It's unique because it doesn't focus on serotonin levels. Instead, it stops the brain's re-uptake of norepinephrine and dopamine. And that combination seems to turn it in the opposite direction to SSRIs when it comes to appetite.

Norepinephrine is, like serotonin, a hormone that works in the brain, but it's more focused on stress reactions. If you need to react to something quickly because it's a threat, norepinephrine will be right on it. And it turns out that bupropion's interaction with that hormone, and possibly its interaction with dopamine too, does the opposite of SSRIs: it dampens appetite, so much so that Wellbutrin is sometimes prescribed as an appetite suppressant for the severely obese.

Norepinephrine's appetite-suppressing nature has been known for a while. It's one of the brain's signals of satiety, or "fullness," and also seems to help keep metabolisms ticking over at healthy high rates. Stanford found that up to 28 percent of people who take bupropion had what they describe as a "significant" weight loss — which means over five pounds.

SNRIs like Cymbalta and Effexor try to have the best of both worlds: they disrupt the brain's re-uptake of both serotonin and norepineprhine. Interestingly, however, they often seem to fall into the same pattern as SSRIs, with up to 29.6 percent of patients experiencing weight gain while on an SNRI, according to the Journal of Pharmacology.

One of the possible explanations for this, and for all weight gain on anti-depressants, may be a side affect of a better mood: a 2006 study at the University of Bristol found that antidepressants actually improved the sense of taste in depressed people, who'd formerly been less sensitive to bitter, sweet and sour tastes. So it's theorized that antidepressant taste boosts, plus the artificial influence on cravings, may contribute to a greater appetite and more weight gain.

Tricyclics are one of the earlier discoveries in the antidepressant field, and are less prescribed than SSRIs or SNRIs, but they're still popular in their own way, and are often used for treating things other than depression, like ADHD. They're very similar to SNRIs, but they have a few differences: tricyclics have a different chemical structure, which means that they interact with the neurology of the brain differently — they effect more of the brain's neurotransmitters, and are associated with more nasty side affects.

Studies of tricyclic antidepressants have shown that, like SNRIs, they're also linked to increased appetite, lowered metabolism, and weight gain, and that, depressingly, gaining too much weight is one of the most common reasons that people demand to change prescriptions or stop taking the medication altogether.

These are the dinosaurs of the anti-depressant world, and they're exceptionally powerful. They're the last resort, and are very rarely prescribed nowadays, because they do some pretty drastic things to the brain's neurotransmitters. It's pretty common lore in depression studies that, for all their blunt-force action, they're actually less likely to cause weight gain than tricyclics or SNRIs — but we're not sure exactly why, or what it does to appetite.

One possible, and slightly upsetting, reason is that MAOI antidepressants are commonly associated with severe nausea — which obviously is a serious appetite suppressant. It likely also damages the brain's hormonal ability to listen to hormonal messages about appetite.

While a medication might sometimes cause a certain side-effect with appetite, there are often counter-cases where it does the precise opposite, because the balance of neurotransmitters in the brain is a highly individual thing. You never truly know how your body will react — which is why you shouldn't make a decision about which anti-depressant to take based on its potential influence on your appetite alone.

More like this
An Honest Review Of The TikTok-Famous WalkingPad
By Kaitlyn Wylde
Heinz Is Selling A Sprayable Mayo Mousse
By Maxine Harrison
Are We Drinking Rosé All Wrong?
By Sheila Yasmin Marikar
TikTok's Favorite Bartender Thinks Mimosas & Bloody Marys Are Out For Brunch
By Alexis Morillo
Get Even More From Bustle — Sign Up For The Newsletter