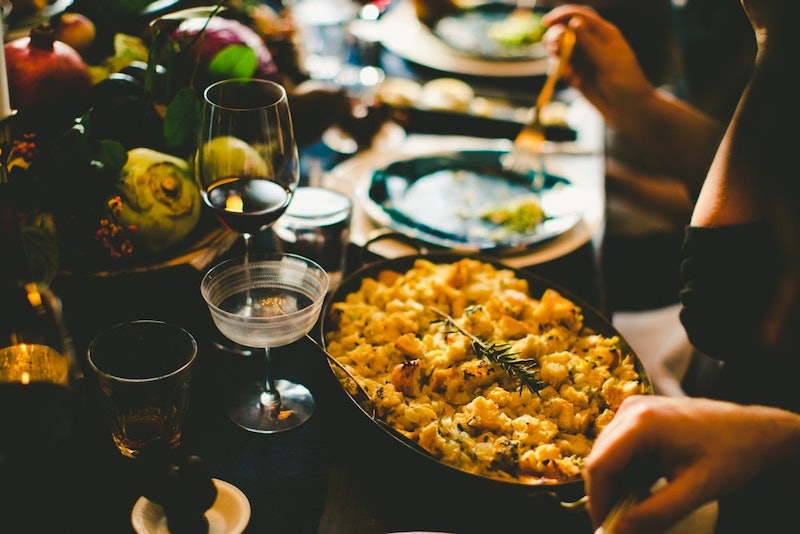 The turkey may be the star of the show, but more often than not, it's the sweet and savory Thanksgiving side dishes that get our mouths salivating and hearts pumping as we immediately plan out how to maximize portion sizes, and wonder how soon is too soon to go back for seconds. Our taste preferences are a window into our personalities, and when it comes to the loaded lineup of what makes up the Turkey Day menu, your favorite Thanksgiving side dish says a lot about you.

Among the various competing compositions of starch, butter, and herbs that accompany the turkey meal, there's a lot to love. You may never publicly vocalize whether you prefer grandma's bread pudding or Aunt Sally's green bean casserole — and rightly so, given the plausible repercussions — but (not so) deep down you're perfectly aware of your absolute favorite. Be it the biscuits whose buttery, flaky perfection make it impossible to stop after just one (or five), or the tart zing of the cranberry sauce that invigorates the palate, your dinner delicacy go-to reveals more about you than you think. So without further ado, scroll on, find your favorite side, and see what you're really telling the world when you scoop out your fourth helping of sweet potato casserole.

You're as easygoing as they come. A super fan of comfort food, you're always down for some home cooking and jovial company. You're the last to make a fuss about common Thanksgiving tribulations your other relatives get caught up in, and the first to be asked to make that last-minute grocery run.

You're a traditionalist and appreciate the classics. You see the value in keeping things simple, and would rather stick with what's been tried and tested than mix things up. Some have dared describe you as "boring," but you stick to your guns. You couldn't be happier with your steady job, J.Crew wardrobe, and tattoo-free arms.

You're well-intentioned and big-hearted, but your benevolence is undermined by your flakiness. Others peg you as noncommittal, though you don't see where they're coming from. In regards to your favorite Thanksgiving treat, you tell yourself "just one" this year so you can save room for other foodie delights, but soon find compromise in committing to "just one every hour." Eventually you just lose count.

You know what you want, and won't let anyone stand in your way. On Thanksgiving, for instance, everything tastes better with gravy, and you won't let social etiquette stop you. You douse every side on your plate to the point that your least funny uncle jokes "do you want any potatoes with your gravy?" There's no question about which plate is yours at the dinner table, because your dish is drowning in that slowly congealing grayish brown. Conviction and courage is what you like to call it.

You've been one for the finer tastes in life since you were a small precocious child. Nowadays you're well-traveled, have a master's degree under you belt, and not only can correctly pronounce "Proust" and "Nietzsche," but can recite them too. Your Instagram feed perfectly balances positive and negative space.

Sometimes the tangy bite of sour cranberry sauce is just the reprieve you need from the trials of daily life. You get a lot of flak for your bitchy resting face and on first impression, bystanders might label you as stuck up, though you say you're really just reserved. You pride yourself on being composed and poised, but you know how to really let loose when you choose to — typically when aided by some Cabernet Sauvignon. What you really wanted to choose as your favorite Thanksgiving side was red wine.

Note: If it's the canned version you prefer, ignore everything above. You should be sitting at the kid's table.

You're a crowd pleaser. Sometimes you try too hard to please, becoming a melange of all good things you think other people expect from you. This can make you seem all over the place, and unreliable. But no need to fret, everyone still loves you.

We get it. You're disappointed kale and collards salad didn't make the list. Roasted squash will have to do, and you'll appear just as healthy getting excited about it. You regram inspirational yoga quotes, and wear athletic wear on grocery runs. You were all about Brussels sprouts before they became a standard of the farm-to-table fad.

You'd rather skip Thanksgiving dinner altogether and curl up with a cozy blanket (and maybe a stuffed animal or two) in your old bedroom. There's a special place in your heart for '90s cartoons and boxed cereal. You still have a MySpace account.

Even if it appears at your dinner table each year, you're really not allowed to choose "macaroni and cheese" as your favorite Thanksgiving side dish. Try again.

Between binging on reruns of Dawson's Creek and Gilmore Girls, you love photographing memories that end up in picture frames engraved with the word "Friends." You're an emoji queen, and your Timehops appear in your Facebook friends' feeds ad nauseam with appropriate emoji additions to exclaim just how much you can't believe that was five years ago. Your apartment has wall art that says things like "Live Laugh Love." On Thanksgiving, you're the first to suggest everyone go around in a circle sharing what they're thankful for.

You may have just survived your quarter-life crisis, but you're fooling no one — you're a kid at heart. Though four years of college and a few more years out in the real world should have instilled in you things like compromise, adjustment, and concession, you still want to have your cake and eat it too. In this case, a marshmallow-encrusted dessert parading as a vegetable dish.

For more foodie ideas, check out Bustle on YouTube.