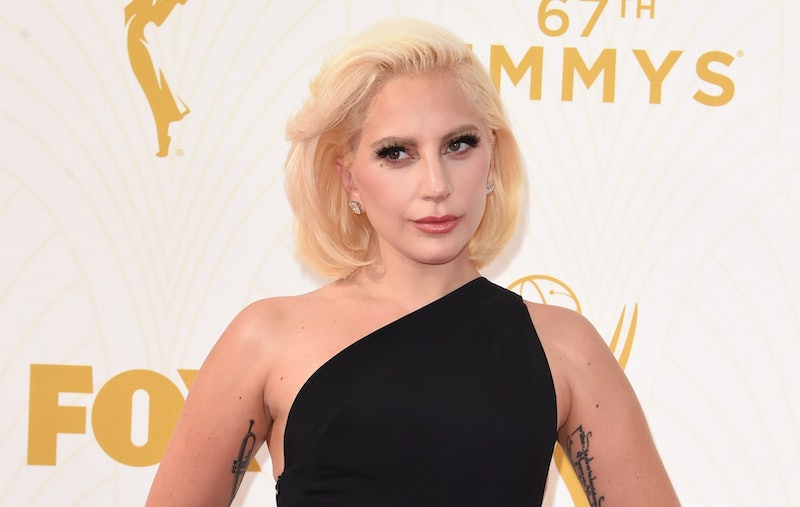 "Why am I unhappy?" It's the question that Lady Gaga asked herself a couple of years ago after feeling like she wanted to quit music completely. But, as she explained in a talk at the Yale Center For Emotional Intelligence, the answer to her question ended up being much simpler than she first imagined. As Gaga opened up about almost quitting music, she began to lay out all of the reasons why she was no longer in love with her career. That's when she realized none of them had anything to do with music.

In 2015, being a musician has less and less to do with actually making music. It's not really about making hit songs, but the ability you have to sell them. So much pressure is placed on creating a public persona that people want to buy into, especially since they're not just buying your albums. Not that Gaga ever seemed to have trouble with that part. From the moment she hit the scene in 2008 with her track "Just Dance" she was like an alien from another planet — and this was way before she entered an awards show in an egg-shaped pod.

Gaga was unapologetic, choosing to be open and honest about whatever was on her mind. She was a hero to the outcasts in her meat dress, talking about her own struggles with weight and confidence. She spoke to those that didn't feel like they were perfect on her song "Born This Way," giving her Little Monsters the battle cry of "Don't hide yourself in regret/Just love yourself and you're set."

But Gaga's ability to connect with the people soon turned her into a spokesperson that wasn't just putting out this idea that you didn't have to follow the crowd, but that you could do so by spritzing yourself with Fame, her perfume line. Or by buying a Polaroid camera — a company that named Gaga its creative director in 2010. Her ability to diversify as a businesswoman across various platforms was certainly good for her checking account, but it wasn't great for her soul. In her speech at the Yale Center For Emotional Intelligence, Gaga recalls ticking off the things she no longer wanted to do:

I really don’t like selling these fragrances, perfumes. I don’t like wasting my time spending days just shaking people’s hands and smiling, taking selfies. It feels shallow to my existence. I have a lot more to offer than my image. I don't like being used to make people money. I feel sad when I am overworked and that I just become a moneymaking machine and that my passion and my creativity takes a backseat — that makes me unhappy.

So what did Gaga do? She started to say no. "I’m not doing that. I don’t want to do that. I’m not taking that picture. I’m not going to that event, I’m not standing by that because that’s not what I stand for," she explained to the crowd. "And slowly but surely I remembered who I am."

Gaga's confession is important because, too often, we as women think we can't go back. That we can't say no to the things we don't want in our life because, if we do, we'll seem ungrateful. It's something Jennifer Lawrence touched on in her essay for Lena Dunham's Lenny Letter about the Hollywood wage gap, explaining that part of the reason she probably didn't try harder to negotiate her salary wasn't because she didn't think she was worth it; she was concerned she would come off as difficult.

And, often, that's true. Even as Gaga attempted to follow this path of saying no by breaking ties with Polaroid, stepping away from promoting her fragrances, and putting more time into her Born This Way Foundation, many saw it as her failure. They saw it as a sign that she had taken a fall — one many seemed to have been looking for for years — instead of considering the fact that it could be her own decision to do so. It was never seen as a reinvention, which was exactly what it was.

Gaga's ARTPOP may have been considered a flop — even Mother Monster herself apologized for the 2013 album — but, since then, she's bounced back, recording an album of jazz standards with Tony Bennett that won her a Grammy and taking a starring role in American Horror Story: Hotel, a bold move that also seems to be paying off.

The point is, Gaga didn't just fade away. She took time to find herself and what she wanted. She may never be as famous as she once was, but she's OK with that. Gaga's doing things her way for the first time in her career and is much happier because of it. She even recommends you try being honest with yourself. "Then you go home and you look in the mirror and you’re like, 'Yes. I can go to bed with you… every night,'" Gaga told the Yale crowd. "’Cause that person? I know that person." And, for many women, that's an important piece of advice: knowing that a no can be as powerful, if not more so, than a yes.

More like this
Halsey Calls Out Label For Asking Them To "Fake A TikTok Moment" For New Song
By Jake Viswanath
Stormi Just Walked A Red Carpet With Mommy Kylie Jenner & Daddy Travis Scott
By Hugh McIntyre
Is Megan Fox Pregnant? MGK Gave A Shout-Out To Their “Unborn Child” Onstage
By Hugh McIntyre
Eleven Turns To An Unlikely Source To Regain Her Powers In Stranger Things 4
By Brad Witter
Get Even More From Bustle — Sign Up For The Newsletter