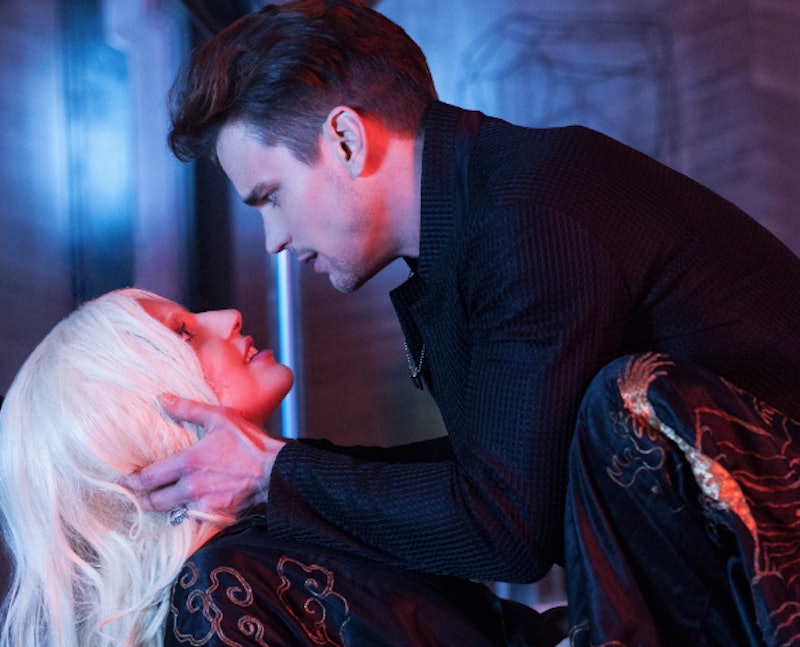 Speaking as someone who watches an insane (and probably even unhealthy) amount of vampire-centric TV shows, let me assure you that keeping all the facts straight can sometimes feel like a full time job. Some vamps can walk in the sun with daylight rings, while others start bleeding out of every orifice if they don't get a certain amount of sleep. The list goes on and on. And the same can be said about the American Horror Story: Hotel vampire rules, which Lady Gaga's character, The Countess, was kind enough to list out to us during Tristan's little tutorial into the fang-tastic fold. So what exactly are these particular rules for Gaga's vampiric ways?

Well, first of all, she doesn't refer to it as vampirism, but instead chooses to call it "the virus," which sounds gross, but comes with a few pretty great perks. For starters, there's obviously the whole immortality thing, but it comes with a slight twist. The virus gives the infected user eternal youth, allowing them to never age. However, that doesn't make them immune to getting hit by buses or shot to death by a silver bullet. So as long as you don't get seriously injured or are reckless, you could potentially live forever.

According to The Countess, the virus also grants its victims with a charged immune system. Sunlight won't kill you, but it does lessen your vitality. They don't use fangs, they cut instead (hence the whole fancy glove thing she's always sporting). Oh, and never drink the blood of the dead or the sick. But the most important rule for The Countess is simple: don't fall in love with anyone. She doesn't go into much detail regarding how she contracted the virus, but I have a feeling it was by the hand (or rather claw) of a man that she cared very deeply about. Perhaps that's why she tends to gravitate toward handsome brunettes? Just saying!