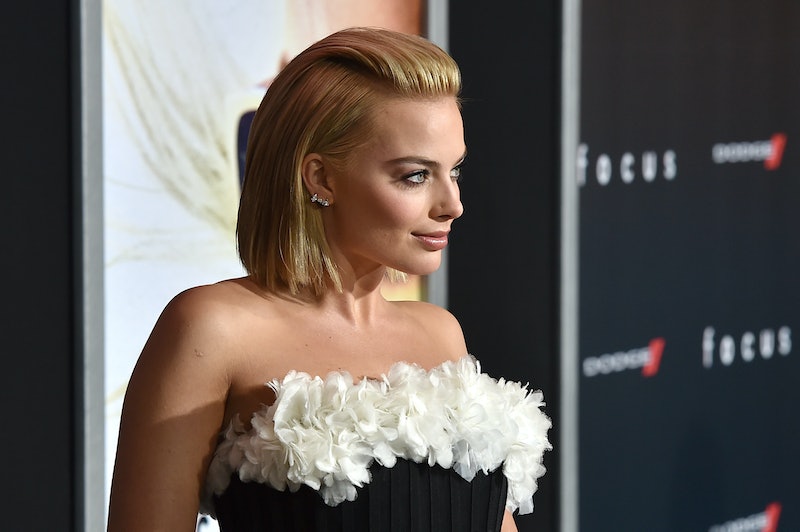 Up until now, I've mostly been excited about Suicide Squad for Jared Leto's turn as the Joker, but Margot Robbie's Empire cover as Harley Quinn is making me think she might give him a run for his money. I'm not saying Leto has been strolling around thinking he has the creeptastic factor in the bag, but, if he is, he might want to rethink it. Robbie is gleefully ghoulish in this spread, a set of adjectives I really wouldn't use anywhere else. But, in this case, they're extremely appropriate, as Robbie is covering the magazine decked out in weapons, with spikes and a collar as jewelry and a pale face with bleeding blue eye makeup and dark red lips, juxtaposed with this huge, creepy smile on her face.

You'd think she was squealing in delight if you didn't catch sight of her cold, dead eyes staring right back into yours. She has a lot of kid stuff going on in her costume and her general attitude, but is also thrusting her sexuality and cold, removed curiosity forward. I'm literally terrified, and the movie isn't even out yet.

I think it's a really good take on the character of Harley Quinn, who is sometimes set up as just a foil to the Joker, a romantic interest who doesn't get fleshed out much on her own. But it looks like Robbie's Harley Quinn will be a creature all her own, who can more than stand up to the choices Leto is making for his own role, as well as (hopefully!) the choices made by all the Suicide Squad 's other villains. Just look at this powerhouse exuding danger in Empire.