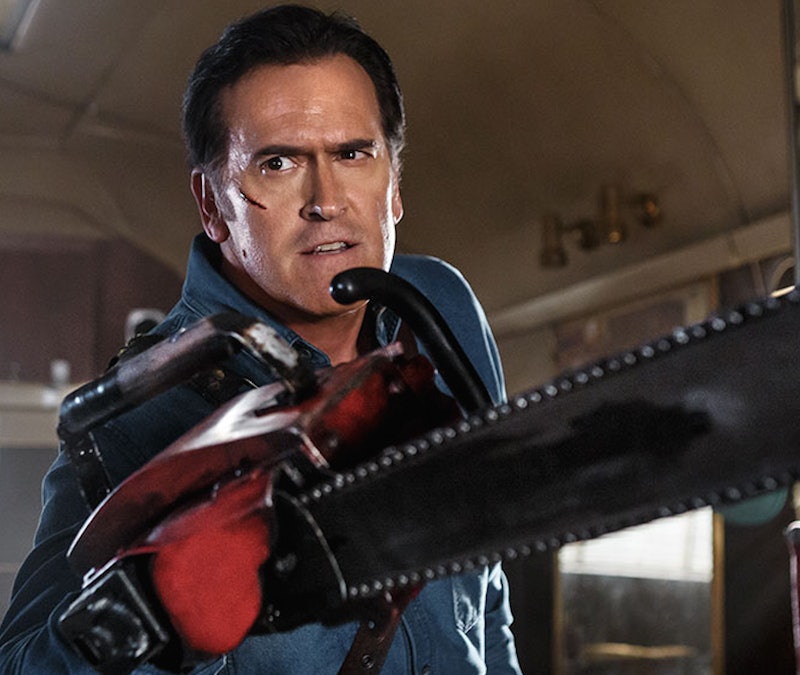 Well, Evil Dead fans, your time of waiting is finally over. The new Starz series Ash vs Evil Dead premieres Halloween night and it could not be more entertaining. While the man behind the Evil Dead trilogy, Sam Raimi, directed the pilot (which was also co-written by his brother Ivan) and serves as an executive producer, it turns out, Ash vs Evil Dead star Bruce Campbell should get a lot of credit for this series evolving into its final form. As many people involved with the series tell Bustle, Campbell really helped shaped not only the return of his beloved character, Ash, but also the transition of Evil Dead from movie to TV series, and even had a lasting influence on the other actors.

Without Campbell, Raimi says, Ash vs Evil Dead would not be a very exciting series. "When me and Ivan were turning it into a TV show, [Campbell] said, 'You guys have to realize that in television, you need people for me to cut away from. Because I'll be working full-time if you have me in just half of it,'" Raimi says. "And meanwhile, you need someone for the second unit to shoot, and other characters, and their stories, and make sure there's enough of them or we won't get enough photography done. It would just be impossible to make it with one guy all the time." Since Campbell serves an executive producer on Ash vs Evil Dead, it makes sense that he's involved beyond acting. And when speaking with him and Raimi, it's clear that both were heavily invested in bringing the best series possible to their diehard fans.

Campbell, meanwhile, passes the credit right back to Raimi and the other writers and producers. "Sam had to convert some of these ideas from an Evil Dead 4 script into a pilot and then introduce new characters," the actor says of the series' formation. "So there was material that they could use, but a hell of a lot that they had to jettison because you're going, 'Well now it's a TV show, who's Ash going to partner with? Where do we find him? Is he still working for his crappy job, what's the scoop?' So it's a lot of things these guys had to figure out."

Campbell then explains that the writers deserve a lot of praise for creating these characters and this new age of the Evil Dead world, but it all came back to Raimi. "We're glad to have the Poobah come back and give it the street cred that it needs," Campbell says. "We would not have been able to do this if it wasn't for Sam, that's the bottom line. Starz or Sam." He then jokes that the series would be fine without him, if they just hired another guy and dyed his hair.

Someone who would likely disagree with that, however, is Ray Santiago, who plays Pablo on the series. "I learned how to hit my mark from Bruce. He taught me that marks have a purpose," he jokes, before explaining that he learned the ease of being a star from both Campbell and their co-star Lucy Lawless. And Santiago's relationship with Campbell is actually mirrored in the friendship between their characters. Pablo and Ash's relationship as well.

"On camera, the character of Pablo learns a lot from Ash," Santiago says. "Pablo learns his strength as a person from Ash, because he sees how strong Ash is and how confident he is. And through idolizing him, [Pablo] realizes the kind of man he wants to be. And off camera, I was really learning a lot from Bruce as well, and I think those two relationships sort of took things to another level, because I do think I learned a lot from this legendary icon on how to be a great actor."

Dana DiLorenzo, who plays Kelly, also says she picked up a lot from Campbell. "What I leaned from Bruce was not only how to deliver a line and how to have timing, which he does so impeccably, but he has this uncanny ability to see when something isn't working in a scene and how to change it," she says.

"He was more than just an actor, he was collaborating with Sam and with the other directors and saying, 'What if we did this for the shot and did that,' and he has a background in directing as well" DiLorenzo continues. "I learned a lot in terms of camera work, and the business and looking at a scene as a whole, which I think is a testament to Bruce Campbell and his passion for telling a story, because it wasn't just about him and it wasn't just about the actors, it was about the crew and the shot and what are we trying to do right now in the scene." Thanks to Campbell, Raimi, and the series' other writers, fans will finally get to revisit the world of Evil Dead on Oct. 31.