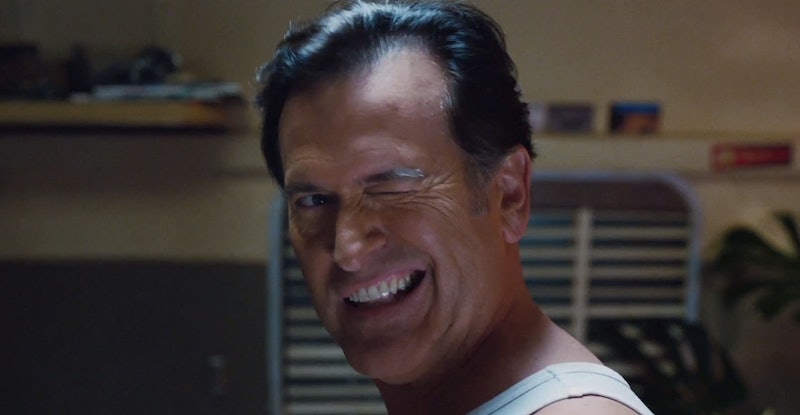 The Evil Dead are back, and they're here to kick some serious Ash. The Starz network unveiled the first full length trailer for upcoming series Ash Vs. Evil Dead at Comic-Con this week, and it looks awesome. The trailer has a lot of kickass moments, and it looks like fans of the original Evil Dead films will have a lot to enjoy in the new series — not only does it star zombie-slayer extraordinaire Bruce Campbell, but many of the shots, monsters, and mythology it includes are a direct homage to the original trilogy.

When viewers last saw Ash in 1992's Army of Darkness, he accidentally travelled back in time and resurrected an army of Deadites, all with the "help" of The Necronomicon (book of the dead). Cut ahead 30 years, and Ash's chainsaw-wielding days are long behind him. He works at some retail store, lives in a trailer, and seems more or less satisfied with his zombie-free existence. Of course, it doesn't take long for some idiot to find The Necronomicon and read aloud from it, and before Ash knows it he's throwing on his dentures, strapping on a chainsaw, and saving humanity from certain peril.

Here are some of the most exciting parts of the trailer that are sure to excite die hard fans.

Ash May Not Exactly Be "Better Than Ever," But He's Back!

Ash's new lot in life as a lazy loner looks pretty entertaining, and it's right in line with Sam Raimi and Bruce Campbell's trademark sense of humor.

Ash Looks More Prepared For Deadites Than Ever

Finally! If you've been attacked by the undead even once, then you know a spring loaded shotgun that shoots out of your floor on command is important. It's called being prepared, OK?

The Necronomicon Plays A Big Part

It looks like they series is nailing the Evil Dead mythology.

Fans of the original films will recognize this shot immediately. If you're anything like me, you felt a twinge of joy when you saw them recreate the iconic head turn.

It May Be TV, But It Doesn't Shy Away From The Horror

The Evil Dead movies are known for their absurd, campy gore, and it looks like there will no shortage of fake blood and prosthetic monsters on this set.

Thank the deity! Not only does Lucy Lawless kick serious butt, but her hair looks perfect while she does it.

Oh, it's back, baby. Ash's weapon of choice hasn't changed in 30 years, and it never will. That chainsaw is his right hand man, after all.

More like this
'Avatar 2' Now Has A Teaser Trailer & Release Date
By Jack Irvin and Alyssa Lapid
The 'Hocus Pocus' Sequel Finally Has A Release Date & It Makes Total Sense
By Shannon Barbour and Radhika Menon
What Does Doctor Strange’s Third Eye Mean?
By Arya Roshanian
Elizabeth Olsen's Chris Evans Friendship Update Was Accidentally Hilarious
By Grace Wehniainen
Get Even More From Bustle — Sign Up For The Newsletter