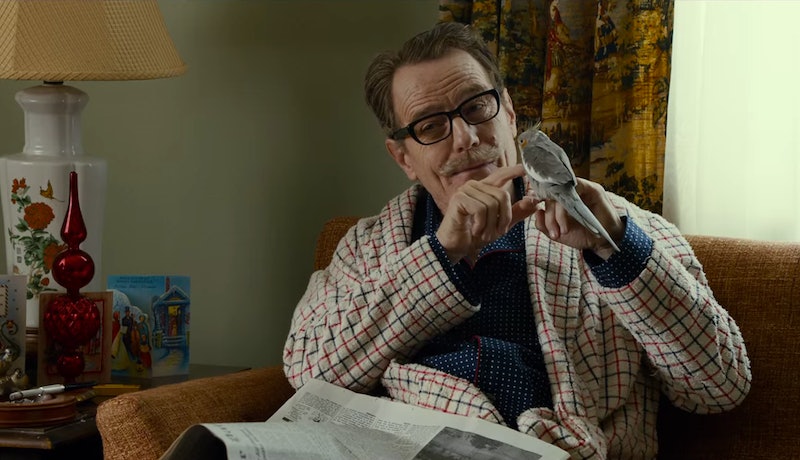 The new biopic Trumbo stars some of your favorite actors. Bryan Cranston plays the persecuted screenwriter Dalton Trumbo, Diane Lane plays Trumbo's wife Cleo, and Helen Mirren plays gossip columnist Hedda Hopper. The leading cast is filled out by John Goodman, Louie C.K., and Elle Fanning, and an additional dozen actors make up the film's headline. Since the characters being portrayed were actual figures, it must have been a challenge to make the actors in Trumbo look like the real people. And because the film is a period piece, there was undoubtedly extra pressure on the costume department to outfit the entire cast in historically accurate garb, yet these photos of the Trumbo cast vs. the real people show that they did a pretty great job of getting it right.

Much of the pressure was on the actors themselves, as they had to capture the personalities and mannerisms of people who were well-known figures. Bryan Cranston told USA Today that the character of Dalton Trumbo was actually a challenge because the writer’s mannerisms were so dramatic that it would be easy to accidentally turn his portrayal an over-the-top caricature. But Cranston is a pro, and I’m confident that his performance will be much discussed in the coming award season. But what about the rest of the actors? Let’s take a look at how successful the cast and creative team were in recreating the characters of Trumbo.

As Played By Bryan Cranston

Dad from Malcolm in the Middle, teacher-turned-meth-chef, or zany Hollywood figure who writes scripts in the bathtub? Although they all have the same face, Cranston's talent for vocal and physical idiosyncrasies makes each of his characters unique.

As Played By Diane Lane

Well, they certainly nailed the recreation of this scene! Lane looks spot-on as Trumbo's supportive wife, and those wave curls are to die for.

As Played By Helen Mirren

As Played By Michael Stuhlbarg

There's a slight (if not striking) physical resemblance, but both Robinson and Stuhlbarg are known for playing mobsters on camera, so this might be a very intuitive match.

As Played By David James Elliot

It's no small task to play one of most iconic Hollywood dreamboats of all time, but Elliot certainly has the jawline for it.

The verdict? It looks like this film wasn't kidding around when it came to matching the cast to the real-life people they were playing. To see how well the actors captured the personalities of their characters as well as their appearance, go see Trumbowhen it hits theaters on Nov. 6.