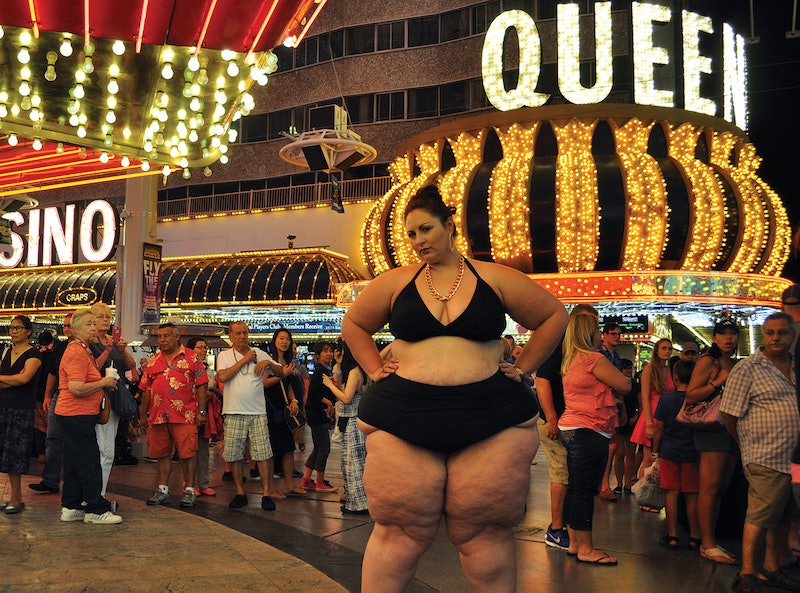 In one image inside The 2016 Adipositivity Project Calendar, a model stands on the rooftop of a snowy building overlooking the city, her arms outstretched towards the sky. She's completely naked, completely unashamed, and completely fat. She's not the "good" kind of fat that we see so often in magazines, either: The perfectly proportioned, curvy goddess that hovers around a size 14. No, this model is fat in the so-called "wrong" ways: She's got no ass, a big stomach, and plenty of rolls. She is magnificent.

The same can be said for all of the models, or "Adiposers," in the calendar, each of their photos capturing the raw power and limitless beauty that can be derived from living in a fat body. The calendar is a facet of the The Adipositivity Project, an ongoing campaign to encourage dialogue about body politics, as well as supply the world with rarely seen, striking images of fat physicality. I recently had an email Q&A with founder and photographer Substantia Jones to discuss the project's origins, message, and what it means to be fat and visible.

"The Adipositivity Project is a body politics photo-activism campaign that gives visibility to fat people who’re generally shut out of positive or neutral representation in media and culture," she explains. "Visibility is vital for happiness and well-being, and at this time in history, we of marginalized populations are forced to create our own. The project is made up of a number of components, but the primary one is the website, where one can find hundreds of photographs I’ve taken of naked (or naked-ish) fat people. Mostly [cis] women, but also men, couples, and trans folks. And of course, there’s the calendar."

Substantia Jones, founder and photographer of The Adipostivity Project.

Now in it's ninth year, The 2016 Adipositivity Project Calendar is a compendium of images of fat women as we normally don't see them.

"I determine what should go into each calendar by first culling my favorite images taken during the previous year," Jones explains. "Some will have already appeared on the website, but most are in queue and have yet to be seen. From those, I narrow it down to what will work format-wise, then whittle it further to the final dozen, staying mindful to represent the variety and diversity of the project."

The 12 images that make up the calendar are each unique in both style and subject, in some ways making each month a visual challenge — a new identity and body to consider that you perhaps hadn't before. Many of the photos are NSFW, but seeing a fat body in its purest, most unadulterated form is kind of the point.

Clearly, there's no limit to the inspiration that can be found within the calendar's pages, even with the older crowds who might normally clutch their pearls.

"I once heard from a young woman who’d given [a calendar] to her grandmother," Jones recalls. "Whom she later told she loved visiting and finding that not only was the calendar still hanging in the kitchen, but the pages were being turned each month. Grandma said, 'Oh I love it. And I’m really looking forward to spending a month with Miss September!'"

Just as the calendar speaks to a diverse group of people, so does Jones' overall message.

"My hope is for people to love and respect their bodies," she says, and to allow others to do the same with their own. That covers sizeist bigotry. It covers fat rights. It covers health, if you choose that for yourself. It covers recognizing the function and pleasure our bodies provide for us. Things far more important than numbers on a label or on a scale. Just make peace with your body, and allow others to find the same peace."