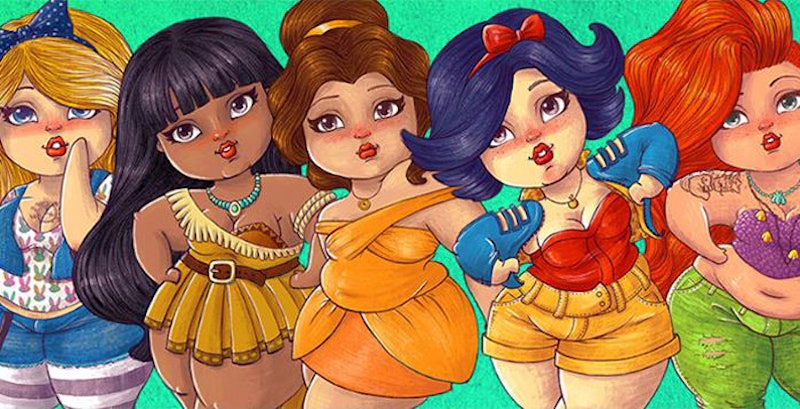 The size acceptance movement has had its share of both highs and lows recently. If nothing else, we are certainly talking about the issues that people of size face, and what it's truly like to be fat — for better or for worse. While the concept is definitely gaining traction in the mainstream, it's important to look at why these conversations are important to be having. And why size acceptance is a vital movement for everyone. Even though it should sort of be obvious, no?Like any relatively informal movement that is spearheaded by humans, the body acceptance one has its issues. I mean, people are naturally going to screw up and make mistakes about a million times before we get things right (history has proven as much!). But when you live in a hierarchical society that values thin over fat, white over black, heterosexual over homosexual, etc., etc., forever and ever, it's hard for these subconscious values not to become internalized within us.This is a super unfortunate reality, but recognizing as much can be a hopeful step. When we acknowledge that problems exist, we can begin to address them. Realizing that we have yet to go deeper, that a movement is incomplete, and that we're only starting to scratch the surface, is a sign that we've inched forward. And that maybe we can have a bit of room to realize what it will take to further create the changes that we need. So without further ado, this is why we need size acceptance.

But seriously: There's still body shape shaming that happens in the worlds of both plus-size fashion and everywhere else. When we say all bodies are beautiful and worthy, we need our actions and our values to be backing that up. Size acceptance isn't about prescribed definitions of what's aesthetically pleasing. It's about realizing that everyone has the right to feel like their bodies are OK. Even if they're "junk-less" or their junk isn't in all the "right places."

I mean, there are so many glorious fatkinis in this universe that are just begging to be worn. And people feeling confident enough to wear them is a stupendous benefit of size acceptance — and by the way, if anyone missed Tess Munster's fatkini photo earlier this year, do get on that.

3. BECAUSE IT INTERSECTS WITH SO MANY OTHER MOVEMENTS

When it comes to body size, there are so many areas in which size acceptance intersects with other movements meant to empower those who have been marginalized. We haven't necessarily carved out the space to hear from all of these voices yes, but we need to.

The fear of being fat is so real that kids are worrying about their weight instead of getting to be kids. We need them to know that there are other things to focus on that are actually more important.

The idea that fat people might not constantly be trying to change their bodies in order to fit smaller clothes — or the idea that not all fat people use "nice things" as a motivation to lose weight — is apparently still offensive to some people.

The philosophy of Health At Every Size is becoming more widely accepted, which is great! But there are still too many people waiting for bodies to be healthy — a narrow definition of the word, of course — before determining that they're worthy.

Cake is delicious and size acceptance means I don't have to be a "good fatty." We all deserve to not avoid eating the things that we want, just so that it looks as though we're sorry for our bodies being the way they are. Just say no to performative dieting!

8. SOME DAYS I DON'T WANT TO LOVE MY BODY

Size acceptance is about accepting your body, and not needing to love it. The (well-intentioned) feel-good messaging that we are often presented with asks us to jump from hating our bodies (or living in bodies that others openly hate) to adoring them instantly. Size acceptance asks us to meet somewhere in the middle, if that's more comfortable for the individual in question.

9. FAT IS STILL AN INSULT

A word that's simply an accurate descriptor of a person can only be offensive when it's loaded with a bunch of values. If "fat" is still being used as an insult, we obviously have some work to do.

What happens when we finally make progress with points 1-9 on this list and the many other basic issues that fat acceptance is fighting to address? Where do we go from here, and what are the bigger goals? Up until recently, this hasn't been a question that's been more widely talked about. But in an xoJane article, Cary Webb asks what Size Acceptance 201 would look like. And I don't know if anyone has an answer yet. But we need one. And the only way to get there is to embrace the 101.