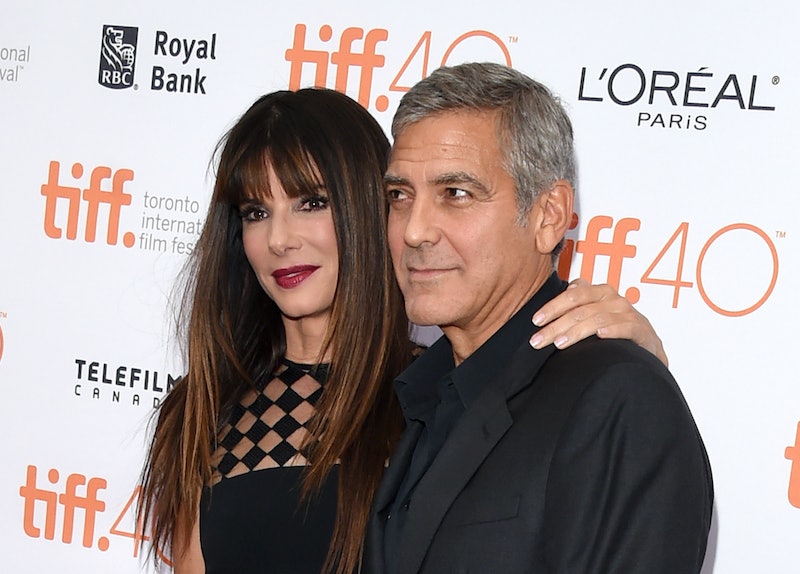 This report from Indiewire might be the best I've seen all day. According to the site: George Clooney and Sandra Bullock have reportedly come together to develop an all-female reprisal of Ocean's Eleven . Like, literally, Ocean's Eleven gender-swapped! Indiewire reports that the duo have been working on the concept, which will feature an all-female led cast — with Bullock as the main star, of course — and the The Hunger Games director Gary Ross on board.

You may pick up your jaws from the floor now.

The project has reportedly been in talks for quite some time (since fall of 2014, according to Indiewire), but was put on hold when late producer Jerry Weintraub passed away in July. Thankfully, it's looking like the reported female-centric film might be picked up again, after it was allegedly initiated by past Ocean's director, Steven Soderbergh, and past Ocean's star, George Clooney. Indiewire also reports that Olivia Milch, of Little Women and Queen & Country, has been working on the script, and that the screenplay reportedly has a draft.

This idea might not come as any surprise though, if you've been paying attention to the way Clooney's been speaking about women's roles in Hollywood. Regarding Bullock's role in Our Brand in Crisis— in which Bullock literally swapped roles with Clooney to play the lead — Clooney seemed more than supportive of the decision to switch up the gender of the character. According to CBS News, the actor suggested during a press tour for the film that if roles for woman aren't available, maybe it's time we do some re-writing. "There's a lot more out there if people just started thinking." This seems like the perfect opportunity to prove himself right, don't you think?

Of course, plot details for the reported project have not been released, but, if the movie does indeed happen, Indirewire reports filming will be expected to begin after Ross finishes up his current Matthew McConaughey project. With female-led remakes like Ghostbusters in the works, I think it's safe to say that the pressure is on to get this one out. While it's still unclear if the project will be related — and if so how— to the Ocean's' trilogy, here's hoping that rumors of a Danny Ocean cameo are true. I mean, I'm 100 percent on board with a female centric Ocean's and think it should only focus on the ladies, but let's be honest: There's always room for at least a Danny cameo.