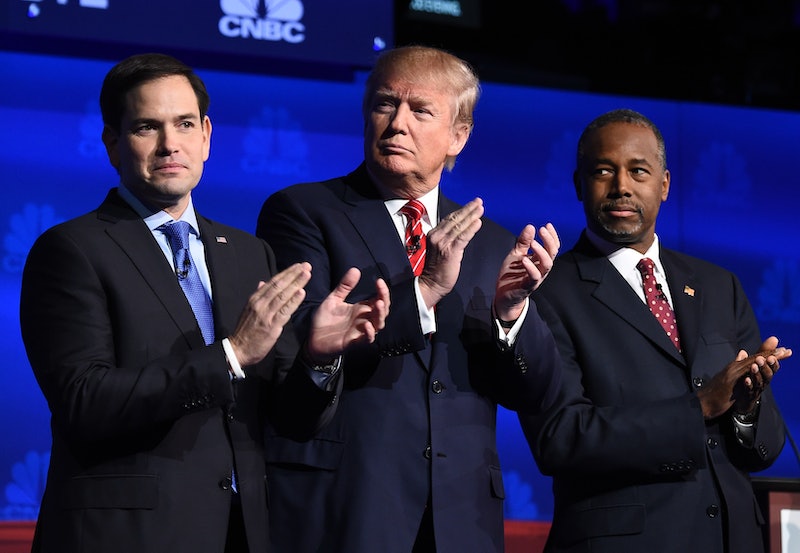 The fallout from the third Republican primary debate just intensified. In the midst of a widespread sentiment among conservatives that the CNBC moderators asked unfair questions during the forum, several Republican candidates want a complete debate overhaul and have joined forces in an attempt to gain more control over the process. What’s notable about this is that they’re doing this without the involvement of the Republican National Committee — in fact, the candidates are just as mad at the RNC as they are at the network that hosted the debate.

CNN reports that representatives from several of the candidates' campaigns will meet on Sunday in an attempt to wrangle control over the debate process from the RNC, which approved the CNBC debate before it took place. The idea reportedly originated with a conversation between Ben Carson and Bobby Jindal’s campaigns; pretty soon, they were joined by representatives for Donald Trump, Lindsey Graham, Mike Huckabee, Marco Rubio, Carly Fiorina, and Rick Santorum. Whether Rand Paul and Jeb Bush will be involved in the effort is uncertain, while Chris Christie’s campaign confirmed that he’s not a part of the effort.

If there was anything that every Republican on stage could agree upon during Wednesday's debate, it was that the moderators sucked. There was a feeling among the candidates that the questions were aimed more at embarrassing them than educating viewers on their positions, and they weren’t shy about voicing their objections. Ted Cruz received praise for an extended tirade against the moderators, in which he claimed that the questions “illustrate why the American people don’t trust the media.” Christie quipped that “even in New Jersey, what you’re doing is called rude,” while Donald Trump criticized a “nasty question” about his moral qualifications to be president.

The national Republican Party quickly jumped on board with the criticism. RNC chief Reince Priebus put out a press release before the end of the night hammering CNBC, claiming the moderators “should be ashamed” of their conduct at the debate and accusing them of doing “a disservice to their network.” But apparently that wasn’t enough; the fact that the RNC sanctioned the debate was enough to convince the candidates to take matters into their own hands.

There’s a rich irony to all of this, and not just because CNBC’s questions weren’t actually that bad. The Republicans may not have liked CNBC’s questioning, but it’s undeniable that all of them — Rubio and Cruz especially — benefited greatly from the perception that they were being treated unfairly. Many of the biggest applause lines of the night came after the candidates attacked the moderators, or CNBC, or the “mainstream media” in general, and you can bet the candidates will repeat some of those lines on the campaign trail. From that perspective, CNBC’s moderators probably helped the Republicans on stage more than they hurt them.

It’s worth noting that trashing debate moderators is a time-honored tradition in Republican presidential politics. In 1980, Ronald Reagan received a thunderous applause for snapping at a debate moderator, while Alan Keyes frequently bashed the moderators during his quixotic 2008 run for the presidency. Newt Gingrich practically built his 2012 campaign around his eagerness to insult the inquisitive panel.

While it’s unclear what change, if any, will result from this upcoming meeting, the situation on the whole is basically a win-win. The Republican candidates for president get to rile up their supporters by attacking the media, while CNBC gets the best ratings it’s ever had. The only clear loser here is the Republican National Committee.

More like this
Prince William Condemns “Unacceptable” Comments Made To A Black Guest At Buckingham Palace
By Shahed Ezaydi
Matt Lucas Is Leaving 'GBBO' & The Internet Already Has New Hosts In Mind
By El Hunt
A Major 'Call The Midwife' Character’s Future Is In Question
By El Hunt
Dyson Is Dropping Futuristic, Air-Purifying Headphones
By Rachel Lapidos
Get Even More From Bustle — Sign Up For The Newsletter