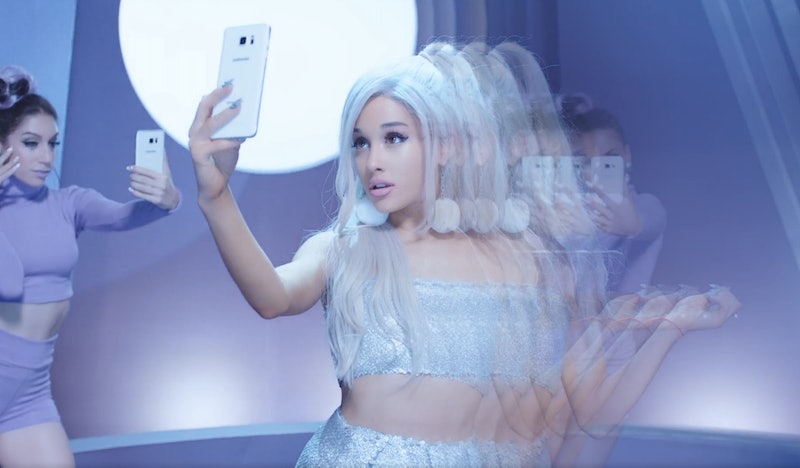 Arianators have been waiting with baited breath for Ariana Grande to drop her next single, the much-discussed "Focus" that has been drawing as much chatter for the sound of the song as it has for the fact that Grande is platinum blonde on the "Focus" cover. Well, luckily, not only did the pop star not keep us waiting, but she even did us all a favor by releasing her new single on hour early. On Friday, Ariana Grande dropped the music video for "Focus," and it is everything. If you were a fan of Grande's "Problem," then "Focus" is right up your alley, featuring similar black and white outfits, along with a similar jazzy melody, and similar dancing — but in a whole new and exciting way that makes this music video stand out for more than just Grande's new hair color. In fact, there are 11 stand out moments that you'll probably want to watch again and again.

The music video has no discernible plot. It's just about listening to the lyrics while Grande and her backup dancers, well, dance them out. It also features plenty of close-ups on Grande's eyes (are you focused on her?) and her mouth (can you hear her asking you to focus on her?), between shots of her posing in various sultry positions and dancing like it's going out of style. Check out the music video below, because it's a doozy.

Even if you can't watch it a thousand times until after you get home from school or work, these 11 moments will help you relive all the magic and fun of yet another surefire Grande hit.

1. When She Reminds You What The Song Is About

And now we know the words to the chorus.

2. When She Keeps You Focused On Her

By blacking out everything around her until her in this spotlight is all you can see.

3. But Then Makes It Hard To Focus On Her

Which Grande do I even look at?!

4. Seriously, Are You Focused On Her?

She's clearly focused on us, the least we can do is return the favor.

5. When The Backup Dancers Come In

And suddenly this turns from a solo video into a giant party.

6. When Her Selfie Game Was So Strong It Broke Reality

We should all aspire to this high level of selfie game. Calling Kim Kardashian...

7. And Then The Video Was In Black And White

Just when you thought it had no more twists and turns to offer, there goes all the color.

8. And The Dancing Gets Even Better

Where can I pick up one of these outfits? I want to sparkle.

9. And Grande Plays The Trumpet

10. But She Really Wants You To Think She Is

You know, while you focus on her.

11. And You Realize Around Here What A Good Time You're Having

But you don't want the music video to end, so you play it again. Sneaky, sneaky, Grande.

Quite honestly, I haven't been this impressed with a Grande song since "Problem," and it's amazing to see her releasing such a pure, fun song that people will likely be singing for weeks to come. You better focus on it.