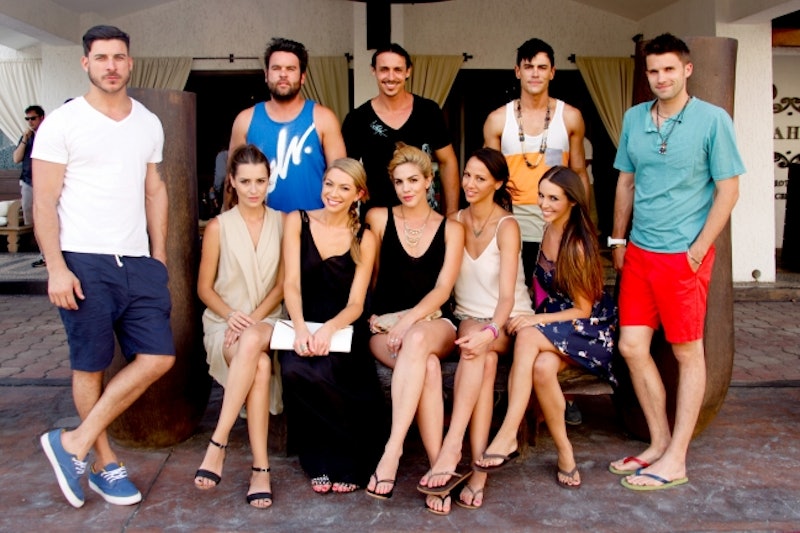 During Monday night's Vanderpump Rules, a handful of the SUR staff left their respective posts at the restaurant to celebrate Stassi's birthday in Cabo San Lucas. It's a reality TV show plot line as old as time: A group of friends/cast mates vacation in Cabo, and mayhem ensues. But the moment you say "reality show Cabo trip," my mind immediately zaps over to another show. A reality show that did the Cabo trip better than any other show. That show is, of course, Laguna Beach .

Back in the mid '00s, MTV sent a bunch of high schoolers to Cabo, said, "HAVE A BLAST, KIDS!" and never looked back. It set the bar for all reality show vaycays. Before the trip, Kristin Cavallari uttered the infamous line, "What happens in Cabo, stays in Cabo." The irony being that none of what happened during the trip would ever "stay" in Cabo because—gasp!—it was all documented by a reality TV crew! Way to wink at the audience, Cavallari. Always liked your style.

I've made no bones about my obsession with Vanderpump Rules , so yes, I was AMPED when I saw that the cast would be taking a booze-fueled vacation this season. This show brings me so much happiness, I thought. The cast truly deserves a chance to kick back and relax on the beach. But when I realized they'd be going to CABO, I pumped the breaks. Oh. Okay, Bravo, I thought. Throwing your hat in Laguna Beach's ring, eh? You're not messing around.

So, how do the Vanderpump Rules and Laguna Beach Cabo trips stack up against one another? Well...

Laguna Beach: Stephen/Kristin. Please see the following exchange:Alex: "What if Stephen hooks up with Lauren in Cabo? Would you be mad?"Kristin: "Well, yeah, but it's Cabo … like, I'll probably hook up with someone else too, you know?"However, while in Cabo, Stephen gets mad at Kristin for flirting with Sam, so he hangs out with LC.

Laguna Beach: While Kristin and Morgan are in neighboring tanning beds, they gossip. Via cellular phone.

WINNER: Laguna Beach. As ridiculous as Tom Sandoval can be, KRISTIN AND MORGAN TALK VIA CELL PHONE IN NEIGHBORING TANNING BEDS.

Laguna Beach: Their hotel is nice, but...

Laguna Beach: Kristin vs. LC. This is one of the best reality television rivalries of all time.

Vanderpump Rules: Scheana vs. Everyone. The Scheana-against-everybody thing just kind of sucks.

Laguna Beach: No one from the Laguna Beach cast is of age, but THE PARTY WILL GO ON.

Vanderpump Rules: Everyone on Vanderpump Rules can drink legally, but it's something else watching grown-ass men act like they're on SPRAAANG BREAK FOREVER.

WINNER: I have to give this one to Laguna Beach because MTV obviously DGAF.

The Worst Guy of the Trip

WINNER: No one wins.

The Worst Quote of the Trip

Vanderpump Rules: "I would rather be gang-banged by all five of you than be in a van with all four of them."—Scheana to Jax, Tom Sandoval, Tom Schwartz, Peter, and Shay.

WINNER: No one wins.

Laguna Beach: 3Vanderpump Rules: 2No one: 2

There you have it. Numbers do not lie. The Laguna Beach Cabo episode still reigns supreme!