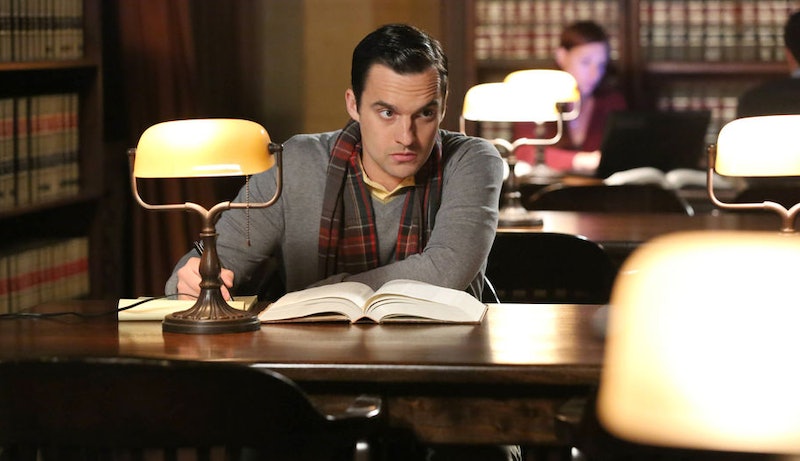 This week's New Girl was... calm? It was the first back from break, and the last time we saw the gang Nick was trying to force-feed sewer fish to his friends, but in this week's "Clavado En Un Bar," things were relatively quiet, and relatively focused. It goes to show it's nice to take a breather every once in a while.

The only bit of true mania this week came through Jess — I'd say "of course," but, really, any of these people are equally experienced and capable of catalyzing the show's chaos. She's been offered a job that doesn't involve teaching, and so she has a very short window to decide whether or not to give up the life path she'd so actively chosen for herself. Much like last season's "Virgins" episode (in which Teen Wolf's Dylan O'Brien featured — never forget), this crisis of Jess' triggers a roundtable of flashbacks from her friends about the beginnings of their career.

Schmidt, it turns out, went from candy-striper to ace Christmas tree salesman, where he was happy until a money-obsessed old man mentored him into marketing and taught him to always accept top dollar and prestige over everything. Coach's name was Ernie until Schmidt and Nick saw what a natural he was at his job and the nickname just stuck.

Winston, meanwhile, realizes that he's rarely made a decision in his entire career — he was handed a basketball (albeit a tiny one) at birth, and only left the game when a sport's injury required it. He begins to question whether he ever even really liked basketball, and so he quits his job. This isn't the first time we've seen Winston start from scratch on this show, so it'll be interesting if they deal with it in any new or innovative ways this time around.

In the end, Jess decides to keep her job — she's a born educator, and now she's set her eyes on taking her school's crappy principal's job and reforming the place, too.

Nick, meanwhile, tells his story of leaving law school, and we learn a surprisingly sweet fact about Nick Miller: He didn't just drop out of law school out of incompetence of laziness (he took and passed the bar this episode to prove it); he didn't like who he saw himself becoming, so he made a change. He actively chose bartending as his job of choice because he felt a peace with it. It was a weirdly beautiful moment, considering that "peace" is not a word you usually associate with Nick Miller.

Of all the episodes this season, this one made the least reference to Nick and Jess' romantic relationship, but the look Jess gave him when she saw this side of him was so full of respect and admiration said everything it needed to.

Things will no doubt return to hijinks and crazy next week, but in the meantime it was nice to take a beat and really just sit with these characters.

As Nick said of his bartending: “I want this. It makes me happy.” Nick isn't always good at adulthood, but when he's good (here, and with his decisions regarding Jess), there's little that's as sweet.