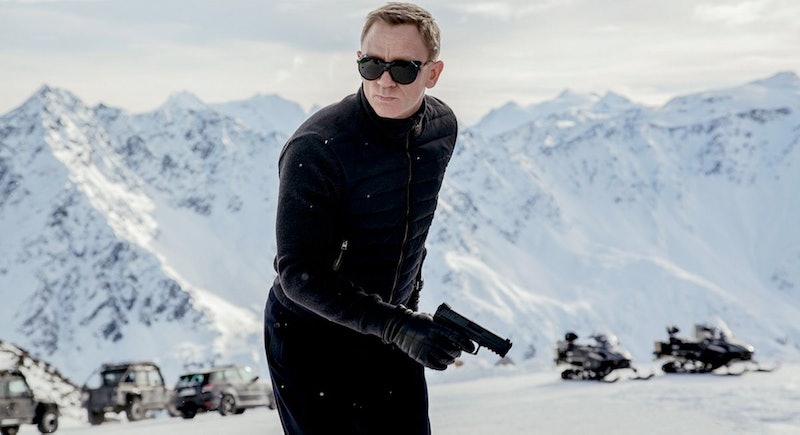 Even after all these years, the UK still loves their James Bond movies. Of course, Bond's native land was the first to debut Spectre, the much-talked about latest film in the long-running British franchise, and unsurprisingly, the movie did not disappoint at the box office. Spectre had the biggest UK movie debut ever, earning $80.4 million this weekend, according to Variety. The last British premiere to be nearly this big was Harry Potter and the Prisoner of Azkaban, back in 2004. This shows that there's no stopping the smooth British spy – not that anyone thought otherwise. The 24th Bond movie is set to premiere in the United States on Nov. 6, and if previous films in the franchise are any indication, Spectre will also make serious bank at the American box office, too. Variety says that Spectre is expected to top next weekend's US charts, with predictions calling a gross of $80 million.

What can I say? Everyone love James Bond. Spectre takes everyone's favorite British spy (played by Daniel Craig) and pits him against a sinister organization called, well, SPECTRE. Sounds like the Bond we all know and love, right? The most recent Bond film Skyfall was released in 2012 and, at the time, it was the highest grossing movie in the franchise, earning $1.1 billion worldwide, according to Box Office Mojo. Yowza. Skyfall also opened in the UK and overseas early before bowing in the U.S., and the movie grossed $32.5 million in the UK and a total of $83 million in the foreign box office. In its opening week in the United States, Skyfall took in $119 million, so I'd say there's a good chance Americans will be headed in droves to see the newest new Bond adventure in Spectre next weekend, too.

Since Craig took over the iconic role from Pierce Brosnan, Bond films' earnings have been on an upswing. According to Box Office Mojo, Craig's first outing as the spy in 2006's Casino Royale earned $599 million around the world, followed by the 2008 movie Quantum of Solace , which grossed $589 million worldwide. In comparison, Brosnan's final Bond flick Die Another Day made $431 million worldwide in 2002 — nothing shabby, but not close to Craig's earnings.

But what makes the past two Bond films so much bigger than the others? You could say it's all because the ladies have Daniel Craig fever (I do, anyway), or you might say it's due to inflation. It could be because both films have high profile British singers singing the theme: Adele sang the Skyfall song in 2012 and won an Oscar for it, and Sam Smith just released the Spectre theme "Writing's On The Wall." Both films also have the same director, Oscar-winner Sam Mendes, who knows exactly how to make a beautiful, yet action-packed film.

No matter what it is, one thing is clear: The world still loves James Bond.