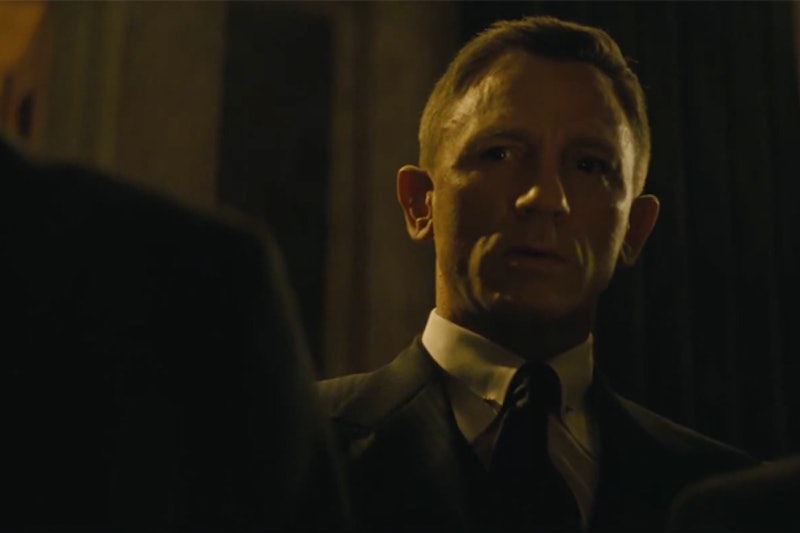 In the new James Bond movie Spectre, Daniel Craig's Bond finds himself discovering a widespread and powerful organization dedicated to evil: SPECTRE. But as any longtime fan of Bond will be quick to point out, this isn't actually the first time Bond has come across the group. SPECTRE first battled the British super-spy in the first Bond movie, 1962's Dr. No, and continued to be his main antagonist until Diamonds Are Forever in 1971 (when the studios were legally prohibited from doing so, more on that later). So given that the film is ret-conning SPECTRE and Bond's first meeting, does this mean that Spectre is a remake of another Bond movie?

No. Bond movies don't have the best continuity, largely because the franchise has been running for so long and changing actors every few years, so the series is largely free to do whatever it wants in terms of plot. So although Spectre is a brand new story, a never-before-seen Bond tale, it definitely harkens back to some of the Bond movies of old. There's an action sequence on a snowy mountain, which calls back to the epic opening ski scene from 1977's The Spy Who Loved Me . There's a brutal one-on-one fight scene aboard a luxury train, reminiscent of the famous scene from 1963's From Russia With Love . And of course, there's the Nehru jacket wearing villain — a classic Bond staple.

But just because Spectre isn't a remake doesn't mean that there haven't ever been any Bond movies that were remakes. In fact, Craig's first outing as Bond, 2006's Casino Royale, had already been made into two movies. Casino Royale was the first James Bond novel published by author Ian Fleming back in 1953. So naturally, it was the first of his books to be adapted for the screen. However, Casino Royale actually made its debut on television, not in movie theaters. It was made into a 1954 episode of the CBS series Climax!, and stars Barry Nelson as an American version of the secret agent who goes by "Jimmy Bond." Obviously, it wasn't the most-faithful rendition of the character, nor was it the most highly-regarded. In fact, the episode was lost for decades. But that didn't stop Casino Royale from being remade... with "Jimmy Bond" once again.

Yes, there was another Casino Royale in 1967, at the height of the James Bond craze. By this point, Sean Connery had starred in four Bond movies, with a fifth just months away. So the series was ready for a parody, and Casino Royale aimed to be just that. The film stars David Niven as Sir James Bond, an older version of the character who comes out of retirement. Woody Allen plays his nephew, Jimmy Bond, and comedian Peter Sellers portrays Baccarat player Evelyn Tremble. Orson Welles portrays the villain Le Chiffre, and original Bond girl Ursula Andress shows up as Vesper Lynd. The film was widely panned as being nonsensical and unfunny, but a few of these characters (who originated in the novel) would go on to show up in the 2006 version, which finally gave Casino Royale a fitting portrayal.

Another Bond movie that was remade is 1965's Thunderball. That film's origins date to a 1959 screenplay written by Fleming and screenwriter Kevin McClory. The original screenplay was never produced, and Fleming went on to incorporate elements from it (like SPECTRE) into a novelized version in 1961. Some of those details, again, like SPECTRE, then made their way into the first Bond movie, Dr. No. McClory sued, claiming that SPECTRE was his idea, and reached a settlement with Eon Productions in 1963 allowing them to use SPECTRE for ten years, at which points the rights would revert back to McClory. The settlement also granted McClory the full rights to the Thunderball story, allowing him to remake it if he wished. And that's just what he did. In 1983, McClory produced an almost shot-for-shot remake of Thunderball called Never Say Never Again , and it featured Connery returning to the role after a dozen years away.

James Bond movies are generally split into two camps: Official and unofficial. Those considered the "official" Bond movies are the films produced by Eon Productions, of which Spectre is the 24th. The "unofficial" films include the Casino Royale parody and television special, along with Never Say Never Again. Out of the official Bond movies, no two share the same story, a streak that will not be broken by Spectre... and one that will hopefully never be broken, period.