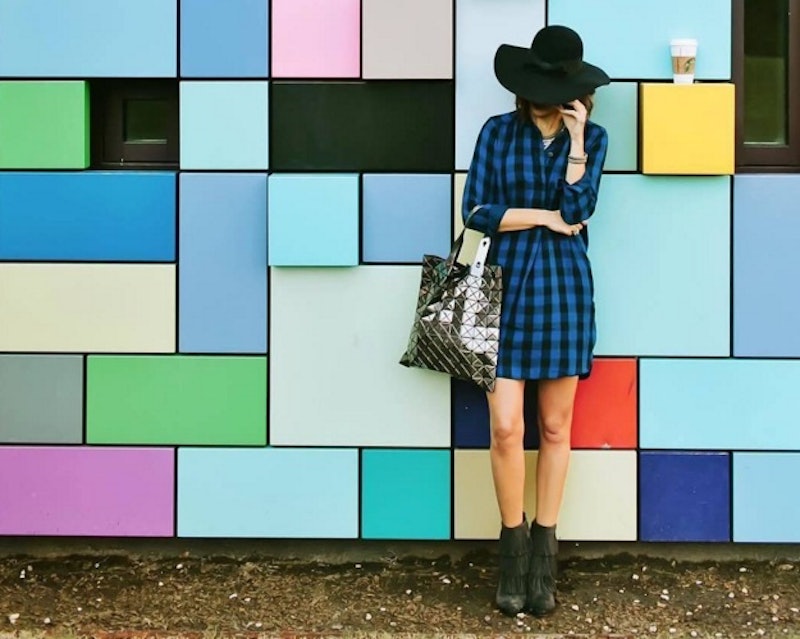 It’s always tricky to figure out how to stop comparing yourself to others. You know that feeling where you’re bored and scrolling through Instagram, liking puppy pictures and photos of coffee cups, when you come across it: a humblebrag from one of your friends. Maybe it's your friend announcing she’s finally able to quit her desk job to start her own business, or something to that effect.The instant flash of jealousy sets in, along with a sharp kind of panic following right at its heels. How come she was able to achieve so much in so little time? How is she that skilled? She must just be better than you, have more friends, be more successful. You just probably have the personality that never succeeds, and you’re going to live in this tiny studio with your tiny paycheck for the rest of your life.

Comparing yourself to others is a quick spiral from a stab of jealousy to full blown mid-life crisis, and it never helps things. But the thing is, you know as you’re doing it that you’re wrong. Things are never quite as black and white as comparing your life directly to someone else’s. But the nice thing is, you can learn to stop yourself from doing it. Here are seven tips on how to stop comparing yourself to others — follow them and you’ll be much, much happier.

1. Focus On What You Have

All it can take is a quick scroll through Instagram and see someone drinking coffee in a charming cafe in their trip to Paris, or a fast nip onto Facebook to see yet another friend get yet another promotion, and you feel yourself fall in the dumps. Everyone seems to be doing something with their life, and here you are in the same spot for what feels like years. Terrible feeling. If you catch yourself beginning to compare yourself to someone else, battle that reaction by grabbing a piece of paper and physically writing down everything you're proud that you have.

According to confidence coach Susie Moore in an article for the Huffington Post, "Use your energy focusing on what you have, not on what others have." If you remind yourself how wonderful your own life is shaping up to be, you won't feel the need to compare yourself. You'll realize your own situation is pretty awesome.

2. Create Goals For Yourself

If feel yourself constantly comparing, maybe it's because you don't have any goals set and feel antsy as you're left there drifting. Think about it: If you have a game plan laid out, you don't feel as inclined to compare yourself to other people's successes because you know your own is right around the corner; you just have to keep working toward it.

So keep an eye out what you're feeling jealous about: Are you sighing over your friend's backpacking pictures? Tell yourself you have exactly six months to save and you'll book yourself a trip to Peru, and then start planning said trip. Do you wish you had the same fulfilling job as the pal on Facebook keeps writing about? You totally can: Begin searching for companies that fit that criteria and see how you can beef up your resume to look attractive to them. Start setting those goals.

Lisa Quast, career writer at Forbes, said, "Practice celebrating your uniqueness and being proud of your accomplishments — no matter when in life they occur. Begin by creating a career development plan with goals and objectives; and then work toward accomplishing these at a comfortable pace." If you feel yourself comparing yourself a lot, set tangible goals that lead you towards those successes you wish you had. That way you'll know you're working up towards something, and won't feel as inclined to break out the measuring stick.

3. Remember You Have A Game Plan

Comparison has a terrible habit of always rerouting you: You were on a specific road that was leading you up towards your goal, but then you see someone else get to their destination before you and you want to switch lanes and follow. It shakes up your rhythm and your plan of action and does more harm than good.

Christy O’Shoney, self-help writer at Nectar Collective pointed out, "You look at someone else’s career, their following or influence, and you assume that perhaps you should be doing what they are doing. Without considering the fact that everyone works at different speeds and has a different path to success, you throw out your vision for yourself and replace it with one that is totally inauthentic to who you are."

Instead of doing that, remind yourself you do have a game plan and the steps will work as long as you have patience. The saying is true: Don't compare your middle to someone else's ending. You've got this.

If you feel yourself beginning to start the comparison game, remind yourself that everyone's timeline doesn't have to look the same. If you're working hard and have a map laid out, your time will come. Just because someone hit there's months before you doesn't mean they somehow took away your own opportunity. Their success has absolutely nothing to do with you; there's still plenty to go around.

O'Shoney said, "It says to you, 'Her success is your failure.' And that’s just not true. In actuality, her success is… her success, and that in and of itself is something to celebrate." So remember: Just because they won doesn't mean there is now less chances to win in the pot. Your day will still come, so instead, feel happy for them.

5. Change Who You're Comparing Yourself To

Instead of comparing yourself to someone else, switch tracks on that knee jerk reaction by comparing yourself to yesterday's version of yourself. If you have to measure, you might as well do it in a productive way. That way you'll either realize you're making progress or become motivated to kick it into gear.

Moore points out, "Remember, life is unpredictable — one day someone else is ahead, another day you will be ahead. Only compare yourself with yourself."

6. Keep In Mind You're Not Seeing The Whole Picture

Do you ever Facebook your insecurities or Instagram your terrible days? I'm guessing the answer is no. Moore suggested, "Have some perspective. Good fortune in one area of someone's life does not necessarily translate to all areas of their life. We don't know what is really going on with people and often the truth can surprise us."

Instead of thinking your life is completely lame compared to those people on social media, keep in mind you're only seeing the most polished pieces. Chances are, they too sometimes sit in their pajama pants till two in the afternoon. They're just not going to share it.

7. Become Clear Over Who You Are

If you can't stop the comparisons, try to switch tracks by becoming clear over how wonderful you are. If you see the value in your own self, you won't want to become somebody else. According to Iyanla Vanzant, self-help author and writer at Huffington Post, "A sense of self lets you see others' successes and become better, not bitter. List words that describe you: smart, strong, kind; mother, friend, visionary. Value yourself and you won't want to be like anyone else."

Next time you see a friend kill it at work or own a dream, instead of measuring how far you fall short, write down all the words that describe you. You'll notice you're not too far behind the bar after all.