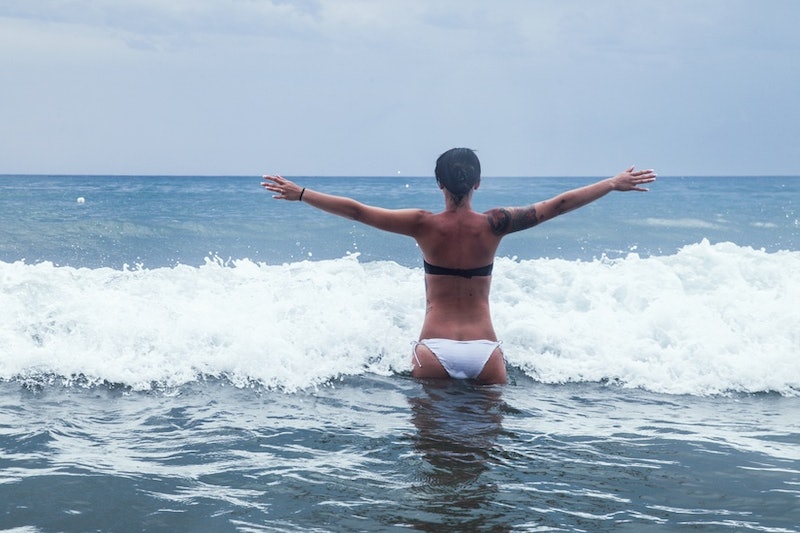 There are just some things you should never say to yourself. You're an amazing, beautiful, powerful woman. So don't think I'm patronizing you when I say that it's time to take it back to kindergarten for a refresher course in one of the most basic, but critical life truths. "If you don't have something nice to say, don't say anything at all." Because no matter how nice you are to other people or your boss or your co-workers, if you're not treating yourself like gold, you're doing your life wrong.

Would you ever tell your best friend, "Wow, you suck at life. You're fat. You're ugly. Nobody will ever love you. You should move to Alaska and live in a cabin by a river until bears feast off of your gigantic thighs for weeks. Because everything's your fault." Probably not.

So why, then, do you let yourself get away with some pretty serious negative self-talk? All that verbal junk is literally sabotaging your happiness. According to WebMD, negative self-talk multiplies the darkness in your life like gremlins fed after midnight. Soon your tiny insecure thoughts become big and frequent enough to suck you into a downward spiral of depression and low self-esteem. Fortunately, the opposite is also true. Positive self-talk has the power to turn the whole negativity ship around. If you're not sure where to start or if you're not entirely convinced that you're your own biggest bully, here are some examples of thought patterns you should change, ASAP.

No, no, no! You are everything. Body positivity is a tough nut to crack, but once you do, you will see the world in a new way. This starts with ending all negative self-talk about your body and promptly replacing it with more accurate compliments.

What To Say Instead: "I'm a fierce goddess queen and I will not let society's unrealistic beauty standards convince me that I am not drop dead gorgeous."

This is one of those sayings that quickly becomes a self-fulfilling prophecy. According to Life Hack, success comes from hustle, not luck.

What To Say Instead: "Bad things happen to everyone from time to time. I can learn from this and move on."

This one's tricky. We all have role models. But you need to learn the difference between valuing someone's opinion and letting it define you, especially when their opinion is really just a judgement. According to Marc Chernoff of Marc & Angel Hack Life, a life coaching blog, no one has the right to judge you. He recommends running away from negative people as fast as your cute shoes will carry you and trusting that you know yourself better than anyone who hasn't lived you life. Preach.

What To Say Instead: "I know in my heart who I am, and that's all that matters."

Writer Anne Lamott said, "Perfectionism is the voice of the oppressor, the enemy of the people. It will keep you cramped and insane your whole life." In her book, Bird By Bird , she advocates giving yourself permission to do thing terribly, a practice she calls "shitty first drafts." This applies to both writing an life, according to Lamott, in that sometimes you can't ever get to the great stuff without first wading through the crappy stuff. It's one of her keys to success.

According to PsychCentral, comparing yourself to others is one of the best ways to kick your self-esteem in the gut. Most of the time you end up comparing your first attempt at something to an expert's thousandth attempt, which is just pointless.

What To Say Instead: "I got this. I can only get better from here."

People with high self-esteem believe in themselves and understand that they deserve to at least take a shot at things. If you think something is too hard, it's likely you're just doubting yourself. In a way, you're calling yourself stupid instead of believing in yourself.

What To Say Instead: The Mayo Clinic recommends instead saying, "I will tackle this from another angle."

You are fabulous. Remember it. Believe it. Live it.